Base of Operations: Camp Hammond in Stamford, Connecticut;
formerly Helicon (Morgan Stark's base)

Powers/Abilities: Andrea Roarke developed powers via unknown means. She possesses the ability to surround herself in fire, and project it in fiery bursts, as well as fly, but her skin remains scalding hot even when in human form. She could also project a "solar lance" form her hands, which she claimed to be "hotter than the heart of a volcano."

(Iron Man I#330)- Having received a call for help from Zimmer, Jim Rhodes arrived at the complex, as War Machine, accompanied by Iron Boy, who discovered the Stark Vaults and the ‘Hall of Armors’ within the complex. The Stockpile broke in, and confronted them.

(Iron Man I#331)- The Stockpile initially overwhelmed Iron Boy and War Machine, until Iron Boy deflected Sunstreak’s ‘solar lance’ at Brass, destroying it. Joust assumed command of the group, sending Sunstreak against Iron Boy again, only for him to freeze her out of the fight with a sustained barometric field of air at absolute zero, while War Machine slammed Unicorn into Joust, knocking her out. Unicorn quickly recovered and charged at Iron oy and War Machine, proving resistant to their weapons, but not to a section of the ceiling they brought crashing down on him.

Morgan Stark, however, managed to cyber-link himself into all of the Iron Man armors at once, and attacked Iron Boy and War Machine again, sending wave after wave of armors at them, until Iron Boy came up with the plan of transmitting the self-destruct frequency to the armors. As he did so, War Machine took the unconscious Joust and Sunstreak to safety (and presumably then to incarceration), and, looking for the Unicorn, found he had already escaped. Morgan Stark, with what was left of his own body dying as a result of the feedback from Brass’ destruction, was seemingly killed when the armors were destroyed.

(Avengers: The Initiative#13 (fb) - BTS) - Rather than continue imprisonment at the Vault, Sunstreak agreed to join the Initiative and undergo training at Camp Hammond.

(Avengers: The Initiative#13) - On the bus ride to Camp Hammond, new recruits Annex, Batwing, Gorilla Girl, Prodigy, and Sunstreak were embarrassed by the enthusiastic Emery Schaub, and surprised by the lack of enthusiasm of the residents of Stamford, Connecticut. They were soon greeted at base by Yellowjacket (secretly the Skrull Criti Noll) and Taskmaster, who code-named Schaub Butterball. Over the following weeks they were constantly embarrassed by Schaub, who forced them to undergo extra punishments constantly with his naivety. They even tried hazing him, but his invulnerability allowed him to sleep through it. Bored one night, the six trainees decided to sneak off-base, convincing Schaub to use his powers to help them sneak off the base in a jeep. They drove to a local beach, built a fire, had beer (except Batwing, who was too young), and went skinny-dipping (Gorilla Girl in her gorilla form, disappointing the others). When Sunstreak made a pass at Schaub on the beach because he couldn't be burned by her, he got upset and drove away with the others in quick pursuit. They all felt bad when the learned he was willing to take the rap for them, after Yellowjacket, War Machine, Taskmaster, and Constrictor tracked them down. Suddenly, King Cobra, Firebrand, MAULER, and Mr. Hyde attacked, seeking to kill Taskmaster. The recruits leapt into battle despite the warnings of their instructors and the villains quickly escaped; during the battle, Sunstreak bathed Hyde in flames, but it didn't harm him and instead allowed him to burn Yellowjacket. Back at base, Schaub was kicked out of the Initiative, making his fellow recruits jealous.

(Avengers: The Initiative#14) - 3-D Man showed up at the Initiative base, claiming there was an invasion of shape-shifters.

(Avengers: The Initiative#15) - 3-D Man panicked and made a hasty retreat.

(Avengers: The Initiative#15/Secret Invasion#3/Secret Invasion: Runaways/Young Avengers#1)- Soon, the Stark technology in the base was rendered inert and Yellowjacket announced the Skrulls had attacked New York. The recruits, under Gauntlet's command, were thrown into action. The recruits fought a deadly battle, alongside the Young Avengers, against the Skrulls in New York City and were quickly overwhelmed.

(Avengers: The Initiative#17/Secret Invasion#5) - The cadets and their allies, in Nick Fury's safehouse while regrouping, heard "Yellowjacket" announce the Skrull invasion to the world on the television.

(Avengers: The Initiative#18/Secret Invasion#6) - Prodigy nearly came to blows with Wiccan when he feared Hulkling might be a sleeper agent, but Crusader inspired them to put aside their differences. Fury then moved them in to final battle, joining dozens of other heroes and villains in the final battle for New York City.

(Avengers: The Initiative#19/Secret Invasion#7-8) - The massive battle continued. As the battle ended, Crusader rushed after the Yellowjacket Skrull back to Camp Hammond, where he was killed along with the other Skrulls by the Skrull Kill Krew. The Wasp was killed in the battle.

(Avengers: The Initiative#20) - Gorilla Girl and the others watched as 3-D Man left, angry with him for killing Crusader.

(Avengers: The Initiative featuring Reptil#1) - Sunstreak was put onto a team led by Tigra to catch Stegron, who was attacking SHIELD bases all over the United States. After picking up and helping train Reptil, the team failed in their first attempt to catch Stegron in South Dakota. They later caught him in Wyoming.

(Avengers: The Initiative#21) - Sunstreak was disgusted to open her graduation papers and learn she was to remain for further training, alongside Prodigy, due to his criminal record.

(Avengers: The Initiative#23) - Sunstreak helped with the cleanup in the area around Camp Hammond after the battle with Ragnarok. 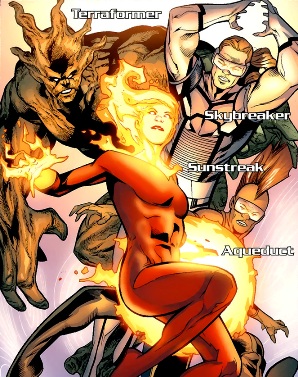 (Avengers: The Initiative#26) - Under Norman Osborn's regime, the Force of Nature, with new appointed member Sunstreak, joined up with the Initiative and were assigned to protect the state of Oregon.

(Avengers: The Initiative#28 (fb) - BTS) - As the Force of Nature settled in, Sunstreak found herself pleased with her new employment, getting a retirement plan and even buying a house.

(Avengers: The Initiative#28) - When the Heavy Hitters (Nonstop, Prodigy, Telemetry) in Nevada succeeded from the Initiative, Osborn sent in the Force of Nature to straighten them up. Under Sunstreak's leadership, they attacked the heroes on a rooftop. Sunstreak scattered the heroes with a fiery burst, Aqueduct hit Telemetry with a watery blast, Terraformer tried ensnaring Nonstop in his roots, and Skybreaker scattered the news helicopter with bursts of wind.

(Siege#1) - Ares called the Initiative, including Sunstreak, to arms for their battle in Asgard.

(Avengers: The Initiative#32/Siege#1) - The Force of Nature were sent by Osborn, alongside other villainous Initiative recruits and the Dark Avengers, to invade Asgard, which hung suspended over Broxton, Oklahoma. Sunstreak aided Sentry, the U-Foes, Iron Patriot, Ms. Marvel (Sofen) and Quicksand in defeating Thor.

(Siege#2) - Sunstreak and her allies stood over the defeated body of Thor until Maria Hill shot them all with a rocket launcher.

As with many of the Stockpile, Sunstreak was very overconfident, and had a tendency to get dangerously close to her foes, despite no need for her to do so. Sunstreak was twice mistakenly referred to as ‘Sunstroke’.
--Snood

Sunstreak's real name was revealed in the Initiative's entry in OHOTMU A-Z HC#5.

CLARIFICATIONS:
Sunstreak has no known connection with: