Base of Operations: Camp Hammond in Stamford, Connecticut;
Formerly a travelling carnival, last located in Connecticut

Powers/Abilities: Gorilla Girl had the ability to transform between her human form and that of a super-strong gorilla, while still retaining her ability to speak and think. 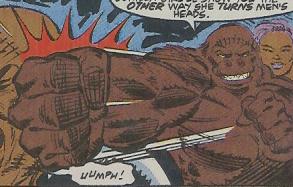 (Marvel Team-Up I#91 - BTS) - While attending the carnvial, Peter Parker (accompanied by Glory Grant) noticed a line of posters for the sideshow, which included "Gorilla Woman."

(Marvel Tales#256/2) - Gorilla Girl (formerly Gorilla Woman), Muck Monster and Six (formerly the Amazing Six-Armed Spider-Man), left the carnival to pursue their own futures. While walking down a road, they were almost hit by a car out of control. While trying to rescue the woman inside, Dr. Melloncamp, the three were attacked by the criminals Hammer and Anvil, who sought to recapture Melloncamp, as she had designed a process to keep the life-maintaining cable that bonded them repaired. The Freaks quickly defeated the villains and decided to become a team of super heroes.

(Thunderbolts: Desperate Measures) - The Thunderbolts hunted down Gorilla Girl for the government. She was able to escape Swordsman, Moonstone and Venom, but after knocking Penance down three flights of stairs, she was severely beaten by him. With several broken bones and lacerations she was brought away.

(Avengers: The Initiative#13 (fb) - BTS) - Gorilla Girl agreed to go to Camp Hammond for training, though she only wanted to go home and not stay in the Initiative after her training was complete.

(Avengers: The Initiative#13) - On the bus ride to Camp Hammond, new recruits Annex, Batwing, Gorilla Girl, Prodigy, and Sunstreak were embarrassed by the enthusiastic Emery Schaub, and surprised by the lack of enthusiasm of the residents of Stamford, Connecticut. They were soon greeted at base by Yellowjacket (secretly the Skrull Criti Noll) and Taskmaster, who code-named Schaub Butterball. Over the following weeks they were constantly embarrassed by Schaub, who forced them to undergo extra punishments constantly with his naivety. They even tried hazing him, but his invulnerability allowed him to sleep through it. Bored one night, the six trainees decided to sneak off-base, convincing Schaub to use his powers to help them sneak off the base in a jeep. They drove to a local beach, built a fire, had beer (except Batwing, who was too young), and went skinny-dipping (Gorilla Girl in her gorilla form, disappointing the others). When Sunstreak made a pass at Schaub on the beach because he couldn't be burned by her, he got upset and drove away with the others in quick pursuit. They all felt bad when they learned he was willing to take the rap for them, after Yellowjacket, War Machine, Taskmaster, and Constrictor tracked them down. Suddenly, King Cobra, Firebrand, MAULER, and Mr. Hyde attacked, seeking to kill Taskmaster. The recruits leapt into battle despite the warnings of their instructors and the villains quickly escaped. Back at base, Schaub was kicked out of the Initiative, making his fellow recruits jealous.

(Marvel Apes: Speedball Special#1) - Gorilla Girl woke up new recruit Speedball, (from the ape universe) when he was having a bad dream. Taskmaster announced an early training, annoying Ant-Man, who ridiculed Speedball for waking them all up. Gorilla Girl defended Speedball, who couldn't hit Ant-Man due to his size-changing powers. She grew defensive when Ant-Man called her Speedball's girlfriend. As Prodigy scoffed at the fight, Speedball offended Gorilla Girl by yelling at her and saying they were nothing alike, provoking her into changing into a gorilla and punching him, which inadvertently allowed him to crash into Ant-Man. Prodigy continued wondering how a monkey ever belonged among them, and Speedball knocked Prodigy through the wall just as Red-9 was showing in Maddy and Justin Baldwin. The Baldwins soon left, disappointed that Speedball wasn't their true son. As the cadets went to train, Speedball was kicked out of the Initiative.

(Avengers: The Initiative#14) - 3-D Man showed up at the Initiative base, claiming there was an invasion of shape-shifters.

(Avengers: The Initiative#15) - 3-D Man panicked and made a hasty retreat.

(Avengers: The Initiative#15/Secret Invasion#3)- Soon, the Stark technology in the base was rendered inert and Yellowjacket announced the Skrulls had attacked  New York. The recruits, under Gauntlet's command, were thrown into action. The recruits fought a deadly battle, alongside the Young Avengers, against the Skrulls in New York City and were quickly overwhelmed.

(Avengers: The Initiative#17/Secret Invasion#5) - The cadets and their allies, in Nick Fury's safehouse while regrouping, heard "Yellowjacket" announce the Skrull invasion to the world on the television.

(Avengers: The Initiative#18/Secret Invasion#6) - Prodigy nearly came to blows with Wiccan when he feared Hulkling might be a sleeper agent, but Crusader inspired them to put aside their differences. Fury then moved them in to final battle, joining dozens of other heroes and villains in the final battle for New York City.

(Avengers: The Initiative#19/Secret Invasion#7-8) - The massive battle continued. As the battle ended, Crusader rushed after the Yellowjacket Skrull back to Camp Hammond, where he was killed along with the other Skrulls by the Skrull Kill Krew. The Wasp was killed in the battle.

(Avengers: The Initiative#20) - Back at Camp Hammond, Gorilla Girl and the others watched as 3-D Man left, angry with him for killing Crusader.

(Avengers: The Initiative#21) - As her fellow recruits got their assignments, Gorilla Girl told them of her plans to enter the reserves and go home with no regrets. She walked away without another word. As she drove away, a clone of Thor, called Ragnarok, attacked Camp Hammond and Gorilla Girl quickly shifted to protect civilians, though she soon realized it was easier to scare them away than to reason with them. She grabbed Ragnarok when he tried to kill Trauma. When Ragnarok turned on her, she thought she'd be killed, but the New Warriors (Debrii, Justice, Night Thrasher, Rage, Scarlet Spiders, Slapstick) attacked just then.

(Avengers: The Initiative#22) - When the evil Thor clone, Ragnarok, attacked, Gorilla Girl aided in the battle alongside her fellow recruits.

(Marvel Apes: Grunt Line#1) - When Marty Blank (the Gibbon) and newspaper intern Jane Potter showed up at Camp Hammond looking for information on the Ape-verse, Taskmaster turned them away, but Fahnbullah followed them to a local diner, where she learned that Ape Speedball had told them Ape X had manifested on their planet. Fahnbullah wondered if that meant the Ape-verse was opening up to their world. They determined that the only was to prove it to their Earth's heroes was by finding Ape X himself, and Fahnbullah reluctantly agreed to let Jane accompany them. Using knowledge she had of the facility from her days as a cadet, Fahnbullah led the others into a HAMMER facility and helped them track down the cell where Ape X was being held, though she grew suspicious when getting in seemed too easy. Ape X's human side, Roy Reyna, punched Gibbon and made a run for it, leaving Fahnbullah to turn into Gorilla Girl to pursue him and aid him against the HAMMER guards. Roy soon retrieved his magic mask, changing into Ape X, and the group soon freed the captive Super-Apes (Igor, Mikhlo, and Peotr) to help them. The group soon used the technology of the robot Ooktron to escape to the Ape-verse, choosing to go there rather than be captured and tortured by the HAMMER guards. They quickly learned that Ooktron had been a plant by Milton Horak to try and get into the Ape-verse, but Ape X destroyed the robot before HAMMER could follow them.

(Marvel Zombies: Evil Evolution#1) - When the group manifested in the middle of an attack of the Marvel Zombies, Gorilla Girl swiftly shifted into her simian form and ripped Zombie Medusa's hair off to protect them. Just as they were about to be overwhelmed and retreat, a group of Marvel Apes teleported in to fight the Zombies. As the two groups battled, Gorilla Girl and her allies determined that Ape Captain America could help them get back to the Ape-Verse, where, Gorilla Girl commented, they were only in danger of getting beat down not eaten. Ape X and Gorilla Girl charged forward and Gorilla Girl used the super-powered wrench of the Wrencher to destroy the Zombie Green Goblin. When Zombie Dr. Doom proved resistant to punches and wrench blows, however, it took the Super-Apes to defeat him. Gorilla Girl and her allies then reunited with Ape Speedball and Spider-Monkey just as the streets beneath them began to collapse and cave in and they fell through to see a human Magneto demanding to know what was going on. They watched on camera as Ape Captain America was defeated, then they were attacked by the decapitated head of Zombie Mr. Fantastic, who wound his organs around Jane's neck. At Fantastic's orders, Ape Speedball explained how they ended up in the Zombieverse, and Fantastic put together a plan to use the Baxter Building's dimensional portal and time machine to stop this confluence of events from ever happening. When they noticed Mikhlo and Igor had been taken by the Zombies, the Red Ghost rushed out of his hiding place, angry. Red Ghost and Peotr agreed to hold the Zombies off while the others went to the Baxter Building. As Red Ghost successfully held off the Zombies by taking command of the Apes, the others narrowly escaped the attack of Zombie Squirrel Girl, but it was too late to stop Ape Speedball and Gibbon from being bit, so Magneto had to kill them both. Fantastic then manipulated Jane into setting off a code that killed Magneto. After they finished building the device, they learned that someone would have to go through and destroy the portal on the other side. Fantastic explained that those there would still remember what had happened, but the events would be erased, and the person who destroyed the portal would likely cease to exist. Ape X volunteered to go, then killed Fantastic with a blow. Fahnbullah turned back into her human form as did Ape X, and she kissed Roy goodbye. While his guard was dropped, she kneed him in the groin so that she could go in his place. Using the Wrencher's wrench, Gorilla Girl attacked the Ape heroes and destroyed the portal, setting time right.

Gorilla Girl never appeared in Marvel Team-Up I#91, outside of being depicted (as "Gorilla Woman") on a poster alongside the rest of the sideshow attractions.

CLARIFICATIONS:
Gorilla Girl should not be confused with: