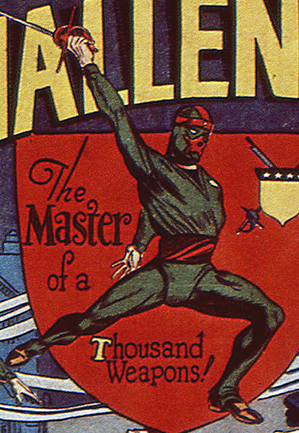 Aliases: Master of a Thousand Weapons

Powers/Abilities: The Challenger is an extraordinary fighter trained in virtually every form of hand-to-hand combat and the use of literally hundreds of weapons. At times he has wielded rapiers, pistols, or any other weapon suitable for the situation. He is an Olympic-level athlete, as well as an accomplished detective, disguise artist, chemist, pilot, climber, and swimmer. His knowledge of nerve control enables him to render himself immune to pain at will. 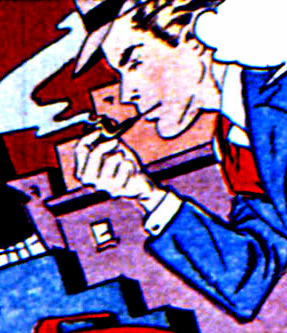 (Daring Mystery Comics#7/9 (fb) ) - As a young law student in the late 1920s or early 1930s, Bill Waring got bullied a lot, but never told his father. Uncovering evidence of city government corruption linking crooks and politicians, Bill's father took it to the DA's office, but the DA, secretly one of those involved in the corruption, directed him to go to the papers, then put out a hit on him. Bill's father was killed and Bill became obsessed with avenging his father's death. He decided to travel all over the world and learn to use every conceivable weapon. selling all his possessions to get enough money. Starting in Japan, Bill perfected in the art of Ju-Jitsu. Across the world he learned new skills: In the mountains of Tibet the mysteries of chemistry, in India nerve control to reduce pain, in Paris sword fighting, in Germany shooting guns and in England aerial combat. Returning to America, he focussed on mastering all other sports and learned that the greatest weapon was fair play.

(Daring Mystery Comics#7/6 (fb) ) - His travels also led him to Abyssinia where he discovered a forgotten Roman colony, and was forced to fight in a gladiatorial arena.

(Daring Mystery Comics#7/9 (fb) ) - Returning to the US in early 1941, Bill took a job as a clerk in the city's record room to become familiar with the names of local politicians and crooks. After creating a costume he deemed himself physically and mentally ready to become the Challenger.

(Daring Mystery Comics#7/9) - Having tracked down Dram, the man responsible for his father's death, the Challenger broke into his office and offered Dram the chance for a fair fight. Choosing his gun, Dram failed to hit Challenger, who in turn slew Dram with his first shot. The Cops saw the masked vigilante run from the murder scene and chased him.

(Mystic Comics I#6/5 - BTS) - The Challenger subsequently became an unofficial consultant to the local police, who knew his identity and were evidently untroubled by his willingness to kill.

(Mystic Comics I#6/5) - A deranged man called the Strangler found himself hypnotized by moonlight and killed numerous people. The police sought Challenger's help in the case, and he decided to challenge the Strangler in the newspaper. The two fought in the street, but the Strangler escaped, but left a clue to his true identity, a white police officer's glove. Together with the police the Challenger devised a plan to let every police officer in the district put his hands on the Challenger while under the light of a full moon, and, as expected, the true Strangler couldn't resist the urge to try and kill him. When trying to escape the Strangler became entangled in a telephone wire and accidentally strangled himself to death, which the police commissioner decided was "poetic justice!"

(Mystic Comics I#7/5) - Bill Waring visited the World Championship boxing match between Spike Guntry and the Ape (Lawrence Schrott). After seeing the immense powerful Ape win the match Bill decided to keep an eye on him for a while. This proved a wise choice because the Ape agreed to join the criminal "Big Joe" Rebar and his gang for $100,000. Pulling a heist on the 6th National Bank the Ape was double crossed by the criminals and left to deal with the police. Hit in the head by a police bullet, the Ape was driven mad by the wound, becoming even more dangerous. The Challenger challenged the Ape in a fight to the death, but after realizing his opponent was wounded he offered the Ape to the police. 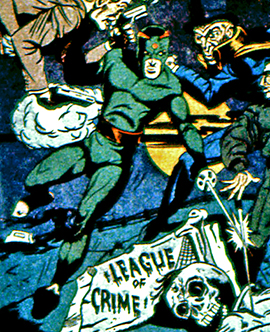 (Mystic Comics I#8/8) - When the newly formed League of Crime began a killing spree the police commissioner assigned the Challenger to deal. He challenged each member to a fight of their own choosing, and after winning even left the criminals alive for the police.

(Mystic Comics I#9/9) - Hearing a scream coming from Greywin Castle the Challenger investigated, and stumbled upon insurance scams pulled by Murdok (Sy Lewis), who used illusory projections to scare people to death. After Challenger saved the latest target, Linda Smythe, from certain death, Murdok fell from the Castle's wall to his death.

(Mystic Comics I#10/8) - When the Lizard (Lon Draga), one of the most dangerous criminals of the previous decade, received parole he opted to hunt down his former enemies and kill them. Witnessing one of the shootings, Challenger recognized the killer as the Lizard and tracked him down with Lt. Pat Quinn's aid. After attracting the Lizard to an empty park, the Challenger and Lizard fought on an ice-covered lake, until both fell through the lake's frozen surface. Following a short underwater battle the Lizard drowned, leaving the Challenger victorious.

(Marvel Premiere#29 - BTS) - Captain America's sidekick Bucky read about the Challenger and other heroes in the newspapers.

(Avengers/Invaders#10, 12) - 1943 - Amongst other superheroes the Challenger (who had apparently returned to his original costume by this time) was killed and impaled on a massive wall by the Red Skull who came into possession of the Cosmic Cube, thus creating the altered Reality-93198. The same Cube was later recovered by soldier Paul Anselm who used it to resurrect the heroes. The heroes including the Challenger combined their efforts with the Invaders and time-displaced Avengers to battle the forces of the Red Skull. When the Skull was defeated the Cube was once again used but to wipe out all of the heroes memories of the entire event.

(The Twelve#1 - BTS / Official Handbook of the Marvel Universe A to Z Vol.2 HC#2) - 1945 Berlin, Germany - Almost every Allied superpower, man, woman or sidekick who had ever worn a costume, descended upon Berlin. (Although not seen in the pages of The Twelve, Challenger's presence was acknowledged by the Official Handbook.) 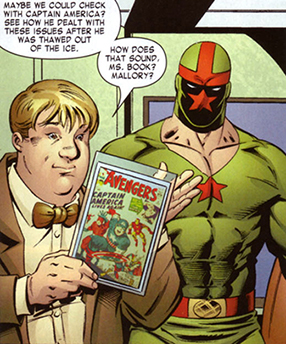 (She-Hulk I#11 - BTS) - Under unrevealed circumstances, the Challenger was bounced forward through time and appeared in the modern era.

(She-Hulk I#11) - Having been gone for half a century Bill Waring had been presumed dead, and he found himself without any assets. To reset this wrong and hopefully get his belongings back Challenger approached lawfirm Goodman, Lieber, Kurtzberg & Holliway. The lawfirm wanted to check with Captain America how he had dealt with the same issues.

(Avengers: Initiative#12 - BTS) - The Challenger joined the Initiative, and became the leader of Montana's Freedom Force, a team consisting of Think Tank, Equinox, Spinner and Cloud 9.

(Avengers: Initiative#18) - During the Skrull Invasion the Montana team was infiltrated by a Skrull pretending to be Equinox. After the fake was unmasked, he knocked the Challenger out, but was slain by Cloud 9.

(Avengers: Initiative#28) - On Norman Osborn's orders Freedom Force and the Challenger attempted to capture Justice's Avengers Resistance (being a time displaced hero he probably didn't realize he was fighting with well known villains).

(Heroic Age: Heroes) - Perhaps realizing he wasn't fighting on the good side, Challenger refused to participate in the siege of Asgard. 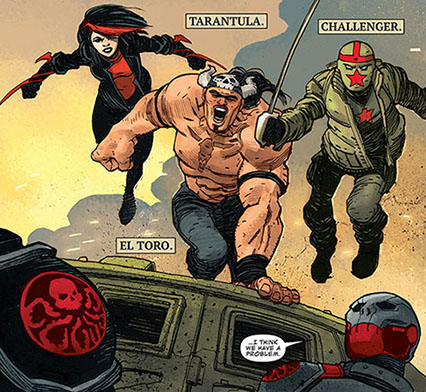 (Occupy Avengers#9 - BTS) - Captain America had taken over the country for Hydra and subjected the population. Suffering from this brutal, absolute rule were the farmers of the American Midwest. They were struggling to survive while Hydra bled their food supplies dry. A small band of superhuman resistance fighters consisting of Nighthawk (the former Deadly Nightshade), Red Wolf, Wheels and the Fireheart cousins worked with Hawkeye's underground movement to seize control of the food supply.

(Occupy Avengers#9) - The Nebraska resistance forces were about to be overrun by Hydra troops when Challenger and the others arrived. The heroes turned the tide and sent Hydra packing. Later, Challenger revealed why they had come to Nebraska: to rally the resistance and convince the militias to join in a national move against the tyrrany of Captain America. They agreed to return with the heroes to the Underground's base in the Pine Ridge Indian Reservation in South Dakota. There, Nighthawk successfully convinced the entire Underground to join them in opposing Hydra one final time. The Challenger also helped raid one of Nick Fury's secret bases for weapons they needed to defeat Hydra once and for all.

The Challenger used his "star-faced" costume only in his first three appearances; in his next three appearances he wore a simplified version of his costume showing more of his face but still keeping the color scheme. After his time jump he returned to his original costume.

Civil War - Battle Damage Report was the first time he was called William "Bill" Waring; in his previous appearances he had just been identified as Bill Waring.

In the Official Handbook of the Marvel Universe A to Z Vol.2 SC#2 (2011) a few full names were revealed for the Challengers' enemies.

In the back of Marvel Premiere#29 (April, 1976) Roy Thomas explained his thought process on picking his members for the Liberty Legion. He listed the Challenger, the Fin, Father Time and Major Liberty as ones he did not use for a variety of reasons.

In Avengers/Invaders Sketchbook (September, 2008) it was said that a super-hero team from the Golden Age whose exploits were previously unknown would be revealed soon, with an accompanying sketch of the Challenger, Captain Terror, Black Widow, Electro, Silver Scorpion and Black Avenger. In the main series these turned out to be (respectively) the disguised Spider-Man, Wolverine, Ms.Marvel, Iron Man, Spider-Woman (Veranke) and Luke Cage.

CLARIFICATIONS:
Challenger has no known connections to 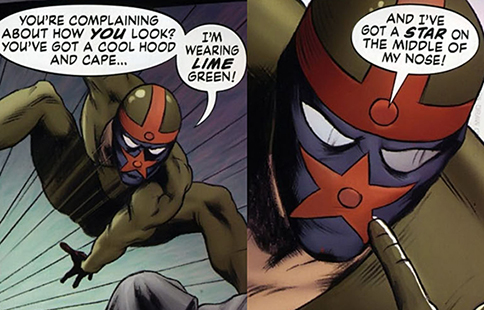 When the Red Skull changed the past using the Cosmic Cube in 1943 (creating Reality-93198), the time displaced Avengers didn't want to risk further contaminating the timeline by allowing the Skull to get a vision of the future, and elected to disguise themselves as heroes from 1943. The Invaders helped the Avengers choose appropriate costumes: Wolverine/"Captain Terror", Luke Cage/"Black Avenger", Spider-Woman/"Silver Scorpion", Iron Man/"Electro", Ms. Marvel/"Black Widow". Spider-Man became the Challenger. Together they fought the Axis forces and reacquired the Cosmic Cube long enough for Paul Anselm, a soldier, to wish for the original heroes' return. Joining forces they defeated the Red Skull.

Non-Marvel Copyright info
All other characters mentioned or pictured are â„¢  and Â© 1941-2099 Marvel Characters, Inc. All Rights Reserved. If you like this stuff, you should check out the real thing!
Please visit The Marvel Official Site at: http://www.marvel.com