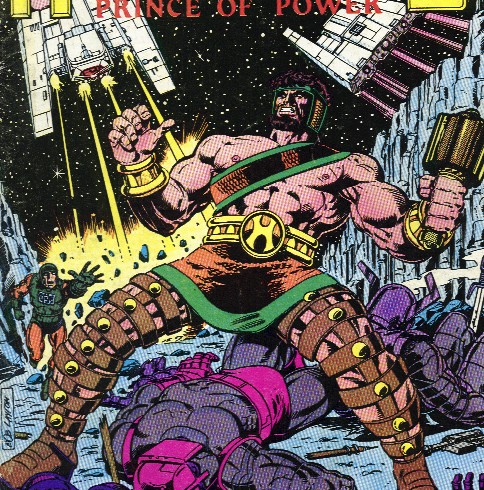 History:
(Hercules II#1) - By the 24th Century, mankind had constructed great floating cities, traveled by advanced spacecraft, and had learned to manipulate objects by the power of thought alone.

(Hercules I#1) - Hercules displeased Zeus, who wished him to learn humility. Rather than send him to Earth, where he was a god, he sent him into space, where he would be a puny creature. He was given Apollo's chariot and steeds, on which he could travel through space. Arriving in the Andromeda Galaxy, he encountered the Colonizers of Rigel, who were impressed with him and sent Recorder#417 along with him to record his exploits. They first stopped at Starharbor, where Hercules offended everyone by trying to pick a fight with a large Pheragot, not realizing that he was from a race of pacifists. Herc redeemed himself by saving everyone when a ship crashed into the harbor, but he did remember his earlier lesson and not try to impart "the gift" of combat on the next guy who bumped into him.

(Hercules I#2) - Falling prey to set-up by Clide and Alpo, Hercules lost a race and was forced to surrender Apollo's chariot and steeds to them as collateral until he could pay the money back. To earn a reward, he rescued Layana Sweetwater from space pirates, and when they didn't pay the reward he kept her as collateral. After Hercules...wooed Layana, she tricked him into believing she was being sold to the monstrous Count Igwanus and Hercules fought off Igwanus and his legions. After learning that Layana had been the willing fiancé to Igwanus , but just found Herc dreamier, the Prince of Power returned her to her future husband, who paid him the reward money. Herc regained the chariot and paid back Clide and Alpo, who used the reward money to cover their medical bills after getting too close to the fierce steeds.

(Hercules I#3) - Hercules met his future friend commander Malin after learning of the annual vanishing of a habitable planet from the Omacran system. Though initially being captured by them, Hercules learned that this was the work of a group of Kawa who worshipped Galactus as a death god after he had consumed their planet. After Hercules destroyed their planet-towing device, he and his recorder barely escaped aboard the chariot as the Kawa committed mass suicide by blowing up their ships.

(Hercules I#4) - Hercules enjoyed a party on Ciegrim-7, the Distiller's Planet, in celebration of his apparently saving them from death. When Nova, the herald of Galactus arrived and attacked, Hercules fought her only until she learned his identity, at which point she went all ga-ga and allowed him to...woo her. Afterwards, Hercules confronted Galactus, who quickly proved that physical force could not stop him. Herc tried to drug Galactus with an ultra-powerful liquid given to him by the Ciegrimites, which, while seeming to work initially, proved only to amuse the mighty Galactus. Still, Galactus spared Ciegrim because Hercules had made him forget his hunger, if only for a moment.

(Hercules II#1) - Decades later (see comments) in the year 2385, Hercules was saddened to see the death of commander Malin. Relocating to the Orion Galaxy, Hercules was dazzled by a beauty on the planet Deniciere, and pursued her endlessly in an effort to woo her. Hercules was most embarrassed to learn that his "woman" was actually an old, crotchety, male Skrull named Skyppi, but after the Skrull got him out of a tight spot, Hercules agreed to allow him to accompany the Recorder and he.

(Hercules II#2) - Fleeing Deniciere, they docked on Space Station Philord, where they encountered Red Wolf, dedicated to the deaths of all Skrulls. Hercules defeated the Red Wolf, but then discovered that his immortal form had begun to show signs of aging, including some gray hair.

(Hercules II#3) - Heading back towards Mt. Olympus, Hercules and company stopped at the moon Titan in answer to a request from Mentor. There they found an aged Apollo, who warned him of Olympus as he died. Before he could depart, they were attacked by Dhielus Shreck, the Last Disciple of Thanos. With the guidance of the Recorder and ISAAC, Herc overloaded Shreck with photonic energy and destroyed him.

(Hercules II#4 (fb)) - At Mt. Olympus, Hercules found his father had apparently gone mad and slain the rest of the Gods. Zeus attacked Hercules, who refused to raise a hand against him until Zeus seemingly slew Skyppi. Herc lashed out and battered Zeus relentlessly and nearly killed him, but stopped at the last second. Zeus then revealed that it had all been a test and that the gods were merely passing on to another plane, which Zeus then did. Given the choice, Hercules chose to restore his immortal and return to space to father the next race of gods.

(Marvel Tales#197/2) - Hercules participated in a scheme of Skyppi's to take take out everyone in the Bomb Crater Cafe, in order to earn the money to pay for some extensive repairs to the Recorder.

(Marvel Graphic Novel: Hercules: Full Circle) - Hercules returned to Wilamean, which appeared to be about to become a victim of Galactus, but this turned out to be a ruse of Clide & Alpo, whom Herc defeated and sent to prison. Hercules and his allies were then captured by Arimathes, emperor of Wilamean, who was actually his son by Layana Sweetwater, who had poisoned her son's mind against Hercules.
Hercules escaped with the aid of Igwanus, and he and his allies joined with Mallax Fortnite and Lucynda Thrust in infiltrating Arimathes armada as he prepared to conquer the neighboring Omacron system. Hercules managed to challenge Arimathes to a trial by combat, and under Igwanus' recommendation, Herc wore a blindfold. Able to locate Arimathes by his bragging tongue, Hercules taught him humility, and earned the chance to explain his side of things to Arimathes. Hercules stayed by Arimathes' side, acting as his advisor in future ventures.

(Marvel Comics Presents#39/3-41/3) - After Arimathes and Hercules defeated an army of Wilameanian star pirates, Hercules convinced him not to execute them, but instead to send them to a rehabilitation center. Meanwhile, Layana plotted against Hercules, using treachery to hire the Assassins' Guild to kill him. However, this backfired on Layana, as Arimathes was nearly killed by one of the guild. The horror of nearly killing her only son crushed Layana and she vowed to never again attempt vengeance. Arimathes began his progress towards recovery.

The Full Circle Graphic Novel, which took place @ 2385 or soon thereafter, may have taken place anywhere from 41 years (as stated by Amayd Malin in Hercules II#1) or 30 years (as stated repeatedly by Arimathes) after Hercules' first encounter with Layana. Amayd was on his deathbed and may have been mistaken when he spoke, while Layana might well have lied about the length of time to falsify her own age, though this same time period would also be reflected in Arimathes' age, which might be harder to falsify.

If I remember correctly, this (along with the first Wolverine limited series) was the second limited series done by Marvel, following the success of the Contest of Champions. It remains one of my favorites. All of these stories are great. Pick 'em and sit back and smile.
MORE PLEASE!!!

This alternate Earth has a full entry in Marvel Legacy: The 1980s Handbook.