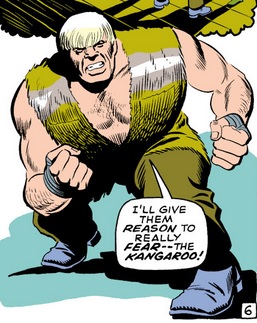 Powers/Abilities: Originally the Kangaroo didn't have any super human powers, but was near peak human condition, and after studying and spending years training  to mimic a Kangaroo, he was able to jump incredibly high and far. Later on, after his enhancements by Jonas Harrow, Kangaroo gained an even greater jumping ability, able to jump 100 yards via his jet boots. He also gained superhuman strength with the aid of air jets enhancing his punch, so much so that he was capable of stunning Spider-Man with only a few blows. However, his overwhelming stupidity was always his undoing.

History: (Amazing Spider-Man I#81 (fb)) - Frank Oliver, who would later be known as the Kangaroo, used to spend his time studying kangaroos in his native Australia. He would live with them, eat with them, and travel with them until he could jump just as fast and high as any of them. Eventually, Frank tried to cash in on his skills and became a boxer, using his superior speed and leaping ability to humble his opponents. However, in one fight, Frank jump-kicked his opponent in the face, badly injuring him. People working on behalf of the injured man threatened to press charges against Frank. For this, and probably many other similar incidents, Frank fled the country to avoid being tried. He fled to America, but was found without a passport and the authorities prepared to deport him back to Australia.

(Amazing Spider-Man I#81) - Before he could be deported, Frank broke free of the authorities grasp and leapt away, deciding that if people around him were going to force him to commit criminal acts with their intolerance, he would not fight it, but embrace it. He declared himself the Kangaroo, and swore that he would give everyone a reason to fear him. Looking to make a name for himself, the Kangaroo saw several guards carefully guarding a brief case. Kangaroo assumed that the case must be holding money, knocked out the guards, and stole the case. Kangaroo then escaped to the rooftops before anybody could stop him. Kangaroo opened the case and saw that there was only a vial in it. He assumed the vial held jewels and put them in his vest pocket. Little did he realize that the vial actually contained an experimental deadly bacteria, which if unleashed upon the city, would cause a massive plague. Unsatisfied with his "jewels," the Kangaroo set out to steal some cash. He attacked a group of people and demanded they give him their cash, but before they could hand any over, Spider-Man arrived. Kangaroo attacked Spider-Man, and although Spider-Man knew he could easily best the Kangaroo with just a few punches, Spider-Man was aware that the Kangaroo was carrying a deadly virus and did not want to risk hitting the Kangaroo and accidentally breaking the vial. After pointlessly trying to reason with the Kangaroo, Spider-Man eventually held Kangaroo upside down and waited for the vial to fall out, then caught the vial with his webs. Kangaroo then ran away and escaped while Spider-Man saw to the return of the bacteria.

(Official Handbook of the Marvel Universe Deluxe Edition#18) - Humiliated by his defeat, Oliver fell into a deep depression and spent the following months as a vagrant in New York City. 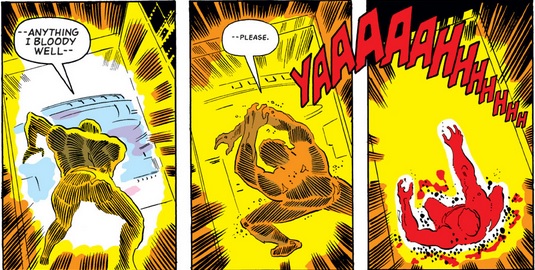 (Amazing Spider-Man I#126) - Kangaroo saw Spider-Man swinging by and reflected on his defeat by Spider-Man and wished that there was some way for him to become stronger and more powerful. Before he even completed his thoughts he was approached by Dr. Jonas Harrow, who had been searching for him. Harrow made an offer to the Kangaroo: in exchange for his loyalty, Harrow would perform a procedure on the Kangaroo that would make him super humanly powerful. Kangaroo agreed. Harrow soon went to work and after a seven hour operation had vastly augmented the Kangaroo's abilities. Kangaroo tested his abilities by punching clean through a concrete wall and jumping a hundred yards effortlessly. However, Kangaroo was less willing to uphold his end of the bargain and smacked Harrow away, claiming that he had plans of his own and was not going to be a pawn of anyone.
The first thing Kangaroo did with these new enhancements was track down Spider-Man. Spider-Man expected Kangaroo to go down fast, but was surprised when Kangaroo unleashed two clubbing blows that stunned Spider-Man. However, before he could finish Spider-Man off, Jonas Harrow activated a device he had implanted in the Kangaroo's brain which caused him incredible pain if he did not obey Harrow's orders. Harrow fled the scene, leaving Spider-Man free to recover. Before long, Kangaroo was sent by Harrow to retrieve a radioactive isotope that he needed for one of his experiments from a special lab on the Hudson river. Kangaroo broke into the lab and prepared to steal the isotope, but was once again confronted by Spider-Man. The two fought back and forth, with Spider-Man warning Kangaroo that the isotopes he was trying to obtain were very dangerous and could burn up a man in a matter of seconds. Just like in their last encounter, Kangaroo didn't listen, and with the arrival of the cops, Kangaroo rushed in to retrieve the isotopes and was immediately reduced to a pile of ashes by them.

(Deadpool III#0 - BTS) - Arnim Zola acquired a genetic sample from Oliver's corpse, which he used to create a Kangaroo proto-husk.

The Official Handbook of the Marvel Universe Deluxe Edition#18 Kangaroo entry speculates that the reason Oliver was able to match the superhuman leaping ability of a Kangaroo is that he was a mutant, whose abilities were triggered by his relentless training

After Oliver died, a guy named Brian Hibbs became the Kangaroo. There was a lot of confusion as to his connection to the original Kangaroo and whether or not they were the same guy, but it was all clarified by Snood in the Spider-Man encyclopedia. For the first and second Kangaroo's connection to each other, click this link Kangaroo. It will take you to the profile for Brian Hibbs.

When I read Amazing Spider-Man I#126, it seemed a little strange to me that  Harrow sent the Kangaroo to retrieve some isotopes that would kill him on contact. That plan just seems slightly flawed...oh well. Maybe he didn't realize that the isotopes would kill Kangaroo...but that doesn't seem like a very good evil genius. Maybe Harrow didn't really need the isotopes, but realized how dangerous and disloyal Kangaroo was and wanted to get rid of him. But even then he probably could have just killed him by using the machine he already planted in the Kangaroo's head...oh well. Still, this is one of the goofiest, funniest characters around, great for comic relief. Too bad he never came back, but not too surprising. I mean, if you were writing Spider-Man, would you bring him back?

Kangaroo was also seen among the afterlife characters in Sensational She-Hulk#53.
--John McDonagh
But these could all actually be hallucinations on the She-Hulk's part. I've read the brain continues functioning after the heart stops beating.
--Will U

Oh man, this guy.  His criminal career consisted of him stealing two incredibly dangerous things that he was too dumb to realize the danger of.  It caught up with him the second time.

The Kangaroo's first appearance suggests that by living as kangaroos lived, and eating what they ate, Oliver gained their amazing jumping abilities.  Oliver's OHotMU Deluxe Edition entry, more sensibly but less hilariously, suggests that Oliver was a latent mutant, and his training regimen just brought it to the surface.

Oliver has profiles in the OHotMU Deluxe Edition and Master Edition.

CLARIFICATIONS:
Frank Oliver, alias the Kangaroo, should not be confused with:

...but has no known connections to:

Non-Marvel Copyright info
All other characters mentioned or pictured are ™ and © 1941-2099 Marvel Characters, Inc. All Rights Reserved. If you like this stuff, you should check out the real thing!
Please visit The Marvel Official Site at: http://www.marvel.com/