Group Membership: Patriarch of the Spider-People

Affiliations: Worshipped by the people of Yezud, who were led by high priest Modar; Tureem (another priest of Yezud);

Enemies: Conan of Cimmeria, Set, Serpent Men; any people served up as a sacrifice for him

Base of Operations: Yezud, a city in Zamora, in the Hyborian era

Powers: Omm, as seen, is an enormous spider, possessing enormous strength, enhanced durability, and the ability to devour a man whole. Whether this is Omm's true form, or just a form it took is unknown. A statue of Omm shows him in a hooded, six-armed semi-humanoid form. Like many gods, it could most likely adopt other forms. In addition, the form of Omm seen may only represent one of its children, or a mortal form it took. Any other abilities it has are unknown. Presumably, his true form was also more intelligent then the giant spider form he took.

History: The origins of Omm are unknown. It is apparently a Spider-God, and was worshipped by the people of Acheron @ 13, 500 bc, and later in Yezud in the Hyborian era (@ 10, 000bc). Omm spawned several other giant spiders during its lifetime, as well as a race of Spider People. Omm and the Spider-People have long been enemies of the Serpent God, Set, and its spawn, the Serpent Men.

(CtB#13)-Desperate to get out of the desert, Conan gained entry into the city of Yezud as a prisoner after threatening to slay their high priest. Conan was offered as a sacrifice to Omm. However, Modar, the high priest, got too close while bragging about Omm's power, and Conan tossed him to Omm as an appetizer. Proving he was perfectly willing to eat anyone thrown in front of him, Omm chowed down on Modar. Omm advanced on Conan, who stabbed him, and then swatted him aside. Conan leapt atop of Omm and stabbed him repeatedly, until Omm made its way back to the hole leading into its cavern, and tumbled back into it. The people of Yezud named Conan as the slayer of their god, but he escaped the city as it collapsed in fire (an ally of Conan had gone into the tunnels beneath the city and removed its support struts).

(Savage Sword of Conan#207-210)-Conan returned to Yezud, which again hosted an immense spider named Zath, and its many offspring. It is unclear whether Zath was Omm himself, or one of his offspring.

(SSoC#197)-In the port of Messantia, Conan encountered Tureem, a priest of Yezud. Tureem used a Spider Amulet to awaken "The Spirit of Omm" within a statue of the Spider God. Conan slew Tureem, and then toppled two immense statues of the gods Dagon and Derketa onto it. Dagon's spear skewered the statue of Omm, putting a halt to its movements. 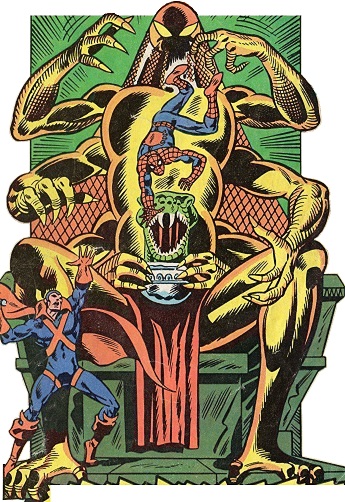 (Marvel Team-Up I#111)-Spider-Man and a Serpent Man (disguised as Devil Slayer) encountered and battled some of the Spider People in their temple in Japan.

The Conan sub-universe is not one of my stronger points, but I do have all of the issues. Let me know what I've missed, and I'll be happy to add it, and credit you as well.

There's no evidence either way to prove Omm is male or female. I use the male terminology since it's referred to as a "god", and because it's easier.

Years after Conan#13, L.Sprague deCamp, a noted author of Conan lore, wrote "Conan and the Spider-God." This story told of Conan's first travel to Yezud, which was later adapted in SSoC#207-210. The adaptation was modified to have it be Conan's return to Yezud, having encountered Omm there years before. It was left up to interpretation whether Zath was actually the recovered Omm, or whether it was his offspring. I'd go with offspring, and probably daughter.

I think it's reasonably likely that many, if not all, of the giant spiders we've seen over the more than four decades of Marvel are descendents of Omm (Alternatively, the African god, Anansi, might be responsible for some of these). How many are there? I don't know. I came up with a few off the top of my head, but I'm sure I'm missing boatloads. Let me know who else you can think of (give me a title and an issue), and I'll credit you.

Thanks to Ron Fredricks for adding a cleaned up version of the snake-headed statue at the end of the profile.

CLARIFICATIONS:
Omm should not be confused with any other giant spiders (see comments)

Modar was the high priest of Omm in Yezud. He was proud and arrogant, and Omm thought he tasted great.
--Conan the Barbarian I#13

Tureem was a priest from Yezud. He was allied with Ahmak, who was involved in a plot to obtain the Dragon of Kao Tsu (a statue). Tureem possessed a Spider Amulet, with which he animated a statue of Omm (either just via magic, or by summoning the spirit of Omm). Right afterwards, Conan threw a dagger through his throat.
In addition, Tureem had the ability to track a person he had touched. After direct contact, he could locate that person, even to the ends of the Earth.
--Savage Sword of Conan#197 (May, 1992)

Conan is the property of the estate of Robert E. Howard. All other characters mentioned or pictured are ™  and © 1941-2099 Marvel Characters, Inc. All Rights Reserved. If you like this stuff, you should check out the real thing!
Please visit The Marvel Official Site at: http://www.marvel.com