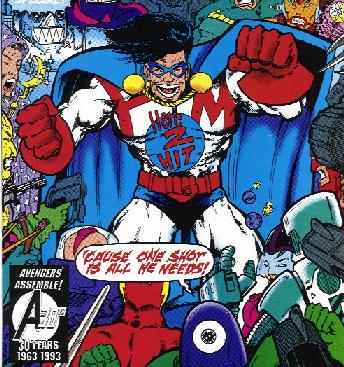 Aliases: None known, although the letters "... antle" are seen on his mailbox.

Base of Operations: Delta City (later, the suburbs of Delta City)

Powers/Abilities: Fight-Man possesses heightened strength (Class 75-100), super-breath, invulnerability, endurance, and flight. He appears vulnerable to fire (although not to corrosive acid or nuclear energy blasts), to asphyxiation, and has been twice felled by having buildings knocked over onto him.

(Fight Man#1 (fb) - BTS) - Fight-Man enlisted a series of young sidekicks, all of whom met their deaths fighting alongside of him.

(Fight Man#1 (fb)) - Fight-Man met Beverly Lacoco at the car show, sweeping her off her feet and leaving her breathless (quite literally, flying her into space and refusing to take her down until she agrees to go out with him). She later married him out of pity.

(Fight-Man#1 (fb) - BTS) - Fight-Man was a member of the Fight Brigade, which eventually disbanded, with the rest of the members having bad feelings for Fight-Man.

(Fight-Man#1)- Fight-Man began what appeared to be an ordinary day on patrol, summoned to stop a simple mugging by Glass-Eye Freddie, Metalhead, and Triggerman Carr. He defeated them easily, taking one of Freddie's glass eyes for a souvenir and ignoring Freddie's threat that "They're gonna get you once an' for all!"

Returning to his home, where he lives with his parents, he was shocked to find a letter from his ex-wife, Beverly Lacoco, suing him for back alimony. Bemoaning his impecunious state, he decided on a plan to remedy the situation.

The next day he visited the offices of Hi-De-Ho Toys and proposed to the manager, Arnold Podunk, that Hi-De-Ho initiate a line of Fight-Man toys. Podunk rejected the offer, and the business meeting was interrupted by an attack from The Plug-In Maniac, Atomic Lou, and The Massive Globula. After his initial surprise at the suddenness of their attack, he defeated them easily.

He realised he had no alternatives, and he met with his ex-wife and her lawyer, Mr. Hendrickson, to plead that they not sue him. The meeting was interrupted by the One-Man Atrocity and Crimeasaurus. They attempted to hold Lacoco hostage, but faced with Fight-man's utter indifference to her fate, tossed her aside in order to engage him in a fight. He defeated them easily, and was surprised to find that Crimeasaurus was not the original, named Takahashi. "I bought the suit from him, I'm Crimeasaurus Two," said his opponent before Fight-Man tossed him through a skyscraper.

Fight-Man returned home only to discover that two more old foes of his, the Able-bodied Assassin and the Polka Doctor, had been invited in by his parents having claimed to be his friends. He managed to resist the Doctor's Hypno-Hate Wheel (probably by being too stupid to hypnotise) and defeated them very easily. He began to realise that there was a criminal conspiracy against him, and his thoughts were interrupted by a phone call from Deborah Walsh of W-GMB News, who wished to interview him for the local television series Delta City Today.

The interview went badly, as Fight-Man was besieged by questions regarding the popularity polls showing he ranked lower than Charles Manson and Adolph Hitler; his actions which caused the breakup of his super-team, the Fight Brigade; tabloid stories detailing his striking of public officials, flying while intoxicated, and gluing his mask to his face; and the deaths of his fifteen teen sidekicks. Finally the interview was interrupted by a broadcast by the Hooded Eye, an old foe of his whom he'd thought dead.

The Hooded Eye announced that he was offering ten million dollars to whomever could kill Fight-Man. Even Fight-Man was scared as thousands of Delta City residents signed on, and his old allies from the Fight Brigade refused his offer of help.

The next day he woke up, and was barely out of bed when he was attacked by a mob of citizens and supervillains. Six hours later he had defeated them all, and crouched aside the mountain of broken bodies awaiting his next challenge. He was confronted by an assemblage of old foes he recognised as The All-Hate Squad, who claimed to have "a hundred new members." They turned out to be more formidable than the previous impromptu assemblages, but he nevertheless managed to defeat them. However, when he knocked Biggest Strongest Man into a the base of the Hudson Insurance Building, it fell on top him, knocking him unconscious.

He returned to consciousness strapped inside a Hold-O-Matic, confronted by his old foe the Hooded Eye. The Eye tore off his mask to reveal himself as the original Kid Fight-Man, grown to adulthood and sworn vengeance against his former mentor. As an ultimate insult, he revealed that he was assisted in his plans against Fight-Man by none other than Beverly Lacoco.

Fight-Man managed to escape from the Hold-O-Matic and defeat the assembled goons. As the police showed up to arrest the criminals, they first charged Fight-Man with the reckless endangerment of a minor and for breaking the child labor act, in connection to the deaths of his former kid sidekicks.

(Agent X#10 (fb)) - Fight-Man was sent to prison on charges of wrongful death, endangering a minor, destruction of public property, and flying while intoxicated.

(Agent X#10 (fb)) - Fight-Man was released on parole, with restrictions against going near any kids or using his powers.

(Agent X#10) - The Hooded Eye employed Agency X to assassinate Fight-Man. Even with his willing participation because of his current suicidal mood, they failed due to the invulnerable nature of his body.

(Agent X#11) - Fight-Man's house was invaded by The Plug-In Maniac, Atomic Lou, and The Massive Globula. They attempted to take Agent X hostage but were defeated by Fight-Man. After learning that The Hooded Eye and Beverly Lacoco had kidnapped Agency X employee Sandi Brandenberg, and were threatening to kill her unless Agent X succeeded in completing his contract, Fight-Man and Agent X returned to central Delta City to attempt Sandi's rescue.

After a battle which encompassed at least twenty-three city blocks, Fight-Man and Agent X arrived at City Hall, only nearly fall prey to the sonic attack of Ill Billy, the mutant yodeling human beatbox. Agent X ordered Fight-Man to rip off his ears, which rendered him immune to Ill Billy's power.

Sandi Brandenberg appeared, and revealed that just as the villains were about to kill her, they were felled by the long-range effects of Ill Billy's power. As she had her firing range earplugs with her, she was able to grab a gun and shoot her way out (which included killing the Mayor).

After the last of the threats are overcome, Fight-Man attempted to arrest Agent X and Sandi Brandenberg as professional assassins. Sandi fired one of Slapp Happy's chicken rockets at a nearby building, which fell on Fight-Man, knocking him unconscious so the pair could escape.

Fight-Man was originally presented as a presumptively fictional character in a comic book read by Bill & Ted.

He has a code against killing (although not maiming), and against hitting women.

At the time of the one-shot, he had been active for at least ten years.

In an interview on his House of Fun website, Dorkin announced, "A 'Fight-Man 2099' 10 page story was almost done for 2099 Unlimited, Joey Cavalieri okayed the pitched idea, but I never had the time to do the story -- which was about F-M finally getting paroled because it was cruel to keep him in jail for a century after the end of the first book."

Hypno-Hate Wheel is likely a play on Hypno Love Wheel, which was a musical band of which I believe some Marvel staffers were once a part.

CLARIFICATIONS:
Fight-Man should not be confused with: