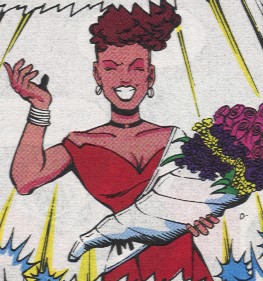 Base of Operations: Delta City

Powers/Abilities: Subsequent to her absorption of the powers of five super-villains, Beverly possesses the ability to generate flame, invulnerability, presumably super-strength, and other as yet unseen powers not including flight.

(Fight Man#1 (fb)) - Fight-Man met Beverly Lacoco at the car show, sweeping her off her feet and leaving her breathless (quite literally, flying her into space and refusing to take her down until she agrees to go out with him). She later married him out of pity.

(Fight-Man#1) - Mr. Hendrickson, Lacoco's attorney, threatened to sue Fight-Man for unpaid alimony. Realising he had no money, she eventually allied herself with the Hooded Eye, in order to reveal to him Fight-Man's secrets. Eventually, attracted to the Hooded Eye's intellect, they pair of them started going steady. Their plan to defeat Fight-Man was foiled when he escaped from their trap and defeated their hired goons.

(Official Handbook of the Marvel Universe HC#4 - Fight-Man) - Increased use of the Coin-Op Creeps by the underworld led to the Robot Gang War. In the war's wake Lacoco and Liebman seized control of organized crime and took over Delta City via dummy corporations and entitities.

(Agent X#10) - Beverly Lacoco participated in the kidnapping of Sandi Brandenberg after her failed assassination of Fight-Man, and phoned Agent X to warn him of Sandi's potential demise should he fail to kill the superhero. 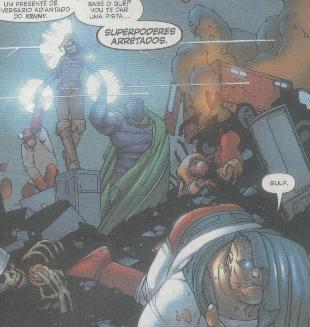 (Agent X#11) - Beverly Lacoco was granted the powers of five of Delta City's "biggest and not so brightest" supercriminals (Katmandingo, Mr. Density, Quickstart, Roman Candle, Shockjock) by the simian scientist DoctOrangutan (only known employee/presumed president of A.P.E. / Advanced Physical Engineering). Given that she no longer needed Kenny Liebman's or DoctOrangutan's assistance, she roasted them with her newly acquired flame powers (presumably acquired from the Delta City villain Roman Candle). She quickly defeated Fight-Man, Agent X and Sandi Brandenberg, and was only prevented from slaying the latter two when the Delta City villain Metalhead, formerly tossed into the air by Fight-Man, returned to Earth and landed directly on top of her.

The identities of Beverly's power donors were mostly revealed in Fight-Man's entry in OHotMU A-Z Hardcover#4.