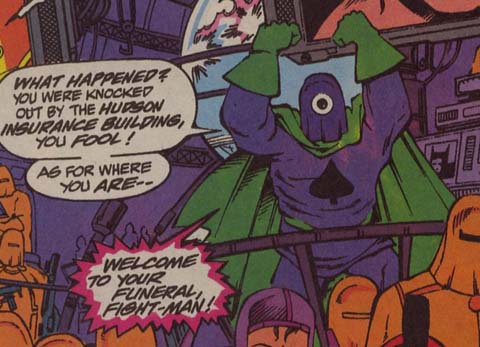 Base of Operations: Delta City 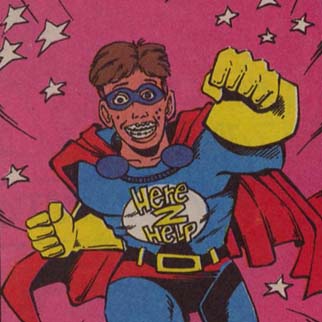 (Fight Man#1 (fb)) - Fight-Man enlisted fourteen-year-old Kenny Liebman to be his sidekick, after the tragic deaths of the youth's parents. He became Kid Fight-Man, but found himself unprepared for brutal fights against adult supervillains. In a battle against the original Hooded Eye atop the Delta City Dam, the Dam shattered when the Eye misfired a powerful weapon, and Kid Fight-Man and the Hooded Eye were swept away. Fight-Man, occupied in fighting the Hooded Eye's robots, did not save them.

(Fight Man#1 (fb)) - Liebman somehow survived, albeit disfigured and slightly crazed. He took the Hooded Eye's clothes from his corpse and swore revenge on Fight-Man. After a decade or preparation, he built a criminal empire capable of destroying his former mentor, during which time he rented the secret underground base of Doctor Anarchy's Anger Gang (while the Doctor was in jail for tax evasion). 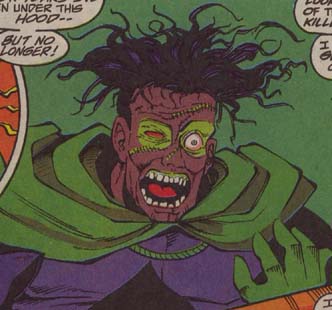 (Fight-Man#1)- When Fight-Man was interviewed by Deborah Walsh of W-GMB News, on the local television series Delta City Today, Liebman interrupted the broadcast under the name The Hooded Eye. He announced that he was offering ten million dollars to whomever could kill Fight-Man.

The next day, after a six hour battle, Fight-Man managed to defeat the Hooded Eye's assembled forces. However, when the hero knocked Biggest Strongest Man into a the base of the Hudson Insurance Building, it fell on top him, knocking him unconscious.

Fight-Man returned to consciousness strapped inside a Hold-O-Matic. The Eye tore off his mask to reveal himself as the original Kid Fight-Man, grown to adulthood and sworn vengeance against his former mentor. As an ultimate insult, he revealed that he was assisted in his plans against Fight-Man by none other than Beverly Lacoco, whom he had started dating as a steady girlfriend after she became attracted to his intellect. Fight-Man nevertheless managed to escape from the Hold-O-Matic and defeat the assembled goons.

(Official Handbook of the Marvel Universe HC#4 - Fight-Man) - Increased use of the Coin-Op Creeps by the underworld led to the Robot Gang War. In the war's wake Lacoco and Liebman seized control of organized crime and took over Delta City via dummy corporations and entitities.

(Agent X#10) - The Hooded Eye allied himself with the simian scientist DoctOrangutan (only known employee/presumed president of A.P.E. / Advanced Physical Engineering). They began research into the transfer of superpowers. After years of praying and plundering Delta City's budget, they arrived at a successful procedure (research was slowed as the first trial proved inconclusive after the test monkey flew away).

(Agent X#10) - The Hooded Eye employed Agency X to assassinate Fight-Man. After learning that Agency X employees Agent X and Sandi Brandenberg had failed in their initial attempt to kill Fight-Man, the Hooded Eye and Beverly Lacoco had kidnapped Brandenberg, and were threatening to kill her unless Agent X succeeded in completing his contract. Fight-Man and Agent X returned to central Delta City to attempt her rescue.

(Agent X#11) - Beverly Lacoco was granted the powers of five of Delta City's "biggest and not so brightest" supercriminals by DoctOrangutan. Given that she no longer needed Kenny Liebman's or DoctOrangutan's assistance, she roasted them with her newly acquired flame powers (presumably acquired from the Delta City villain Roman Candle).

CLARIFICATIONS:
The Hooded Eye should not be confused with: