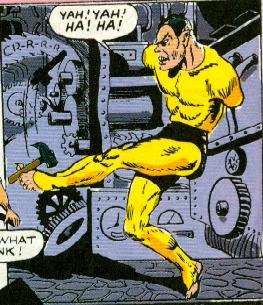 Base of Operations: Hades;
formerly 1940's America and Germany

Powers/Abilities: The Armless Tiger Man can use his teeth and feet in several remarkable ways. He can bend steel bars with his teeth, and swing on a rope by biting the line. His teeth have also been sharpened for use as a weapon. With his feet, he can hurl knives from between his toes, catch heavy weights, and perform nimble tasks of agility. 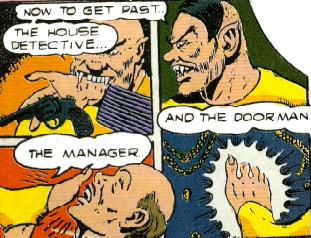 History: (Marvel Mystery Comics#26 (fb))- In his youth, Hertz worked in a mechanical laboratory in Munich, Germany. One day, his arms were caught in the machine, and both were lost. After being discharged from the hospital, he learnt how to use his feet and and teeth in place of his hands. After years of training, he set off to use his newfound prowess to destroy all machines, cursing them for costing him his arms. He was finally caught by the Gestapo, and when they learnt of his hatred of machines, they sent him to America to do as he would.

The Angel later caught up to him at the Johnston Defense Plant, where he had begun wrecking machines. The two of them grappled, and the Angel managed to incapacitate him by jamming a piece of pipe in his mouth. He tied the Armless Tiger Man up, and interrogated him on his motives. The Angel then turned him over to the authorities.

(Incredible Hercules#130) - Hercules attacked the Jury, but they overpowered him. Armless Tiger Man was later present at Zeus' trial.

(Incredible Hercules#131) - The Armless Tiger Man attacked Pluto when he refused to honor his promise to release everyone from Hades.

Armless Tiger Man was one of the Nazi villains in Captain America/Black Panther: Flags of Our Fathers#2-4 (July-September, 2010). Unfortunately for this obscure villain the series just does not work well within Marvel continuity, which disqualifies his appearances in this series from this profile.
--Markus Raymond

Hmm, I wonder if the ATM ever teamed up with any other pseudo-Luddite villains.  And, uh... "Chateau Quim"?  If red wine goes with steak, and white wine with fish, do I want to know what the Armless Tiger Man was eating up there in that hotel room?
--esoteric mongoose/Sean Curtin

CLARIFICATIONS:
The Armless Tiger Man should not be confused with: