Location/Base of Operations: Subterranea, including caverns beneath the Himalayas

Powers/Abilities: The Lizard Men are a cold-blooded reptillian species of varying dimensions; Lizard Men seen in the Himalayas stood over twice as tall as a normal man, while other Lizard Men have been similiar in build to a human. Lizard Men are said to live for 1,000 years each.

The Lizard Men have access to a variety of Deviant tools left behind in Subterranea, as well as technology lent to them by Kro. This includes the Bloodhound Missile (which can ensnare even an Eternal within its coils), a variety of energy rifles, and earth-borers used for traveling to Subterranea. Although they were able to keep these devices in good repair, they did not possess the knowledge to recreate such technology themselves.

History: (Tales to Astonish I#24 (fb) - BTS) - The Lizard Men are a race of Deviant-bred mutates who were abandoned by the Deviants centuries ago, and came to dwell in Subterranea. Over time, they came to know the Deviants as only "the ancients," and continued to use the Deviant technology they had been able to retain.

(Tales to Astonish I#24) - As one of the Lizard Men scouted for their lost brother, he came upon television producer Victor Cartwright, who was masquerading as the Abominable Snowman. The Lizard Man mistook him for one of his people and brought him beneath the surface after realizing his error, and determining that no one could see him and live. However, Cartwright's assistant Fred Cooper followed him into the Lizard Men's lair and helped him escape the creatures. They made their way back to the surface in the Lizard Men's borer, then destroyed it to prevent them from ever invading the surface world. 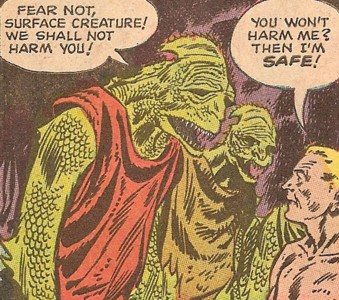 (Journey Into Mystery I#64/2) - Reptilian beings that were slightly larger than humans, they were a primitive but peaceful group that dwelled in the stygian depths of the earth, where their only source of comfort and luxury was the light produced by a large diamond.

When they came upon escaped convict Eric Kane, they told him that he was welcome to stay with them. Kane stole the Lizard Men's diamond and fled, but contact with diamond transformed Kane into a Lizard Man himself. Kane returned to them, but the Lizard Men shunned him because of his attempted theft.

(Marvel Universe#6) - The Lizard Men were dispatched to Midnight Mountain in Borneo by Kro to assist in the capture of Makkari, who had taken the guise of the super-hero Hurricane to serve in the Monster Hunters. Makkari's teammates aided him in battle, along with the mutate Gorgilla, but one of the Lizard Men managed to snare Makkari with a Bloodhound Missile. They carried Makkari into a tunnel leading back to Subterranea, with Ulysses Bloodstone in hot pursuit. To prevent their being followed, they destroyed the tunnel entrance behind them, halting Bloodstone's pursuit. In their haste, one of the Lizard Men was left behind, and his mind was read by Dr. Druid, who learned that Kro's base was beneath Monster Island.

(Marvel Universe#7) - The Monster Hunters left the last Lizard Men under the care of Gorgilla.

It's easy to see why Roger Stern tied the Lizard Men to the Deviants-- the "ancients" of their history fit perfectly with what we know of the Deviants and Subterranea.

The Lizard Men story from Journey into Mystery I#64 (January, 1961) was reprinted in Fantasy Masterpieces#6 (December, 1966)

Some images borrowed from Monsterblog, the complete guide to Kirby's monsters!

I see a possibility that the other Victor Cartwright was the same guy as the one in this profile.
--Markus Raymond

There is an Atlas age race of underground Lizard Men in Menace#8 (October, 1953) 1st story that could have some connection to the Lizard Men
--Gammatotem

CLARIFICATIONS:
The Lizard Men may well be the same entities as:

But should not be confused with:

Victor Cartwright has no known connection to:

Victor Cartwright was the producer of the popular television series "So You Want To See It," which prided itself on meeting every request of its viewers. Cartwright's greatest rival was Don Jordan, who attempted to derail the program by requesting a photo of the Abominable Snowman. Cartwright did his best to comply, but when he could not find the creature, he stooped to disguising himself in a fur suit to deceive his viewers. However, his garb resulted in him being confused for a long-lost member of the Lizard Men, and he was brought by the Lizard Men to their underground lair to be killed. Cartwright escaped the Lizard Men with the help of his aide Fred Cooper, and after escaping to the surface with one of the Lizard Men's borers, they destroyed the device so that the Lizard Men would be unable to travel to the surface again. Returning to America, Cartwright unmasked Jordan as the man who had made the request for the Abominable Snowman on live television, publicly humiliating him.

Fred Cooper was Victor Cartwright's assistant on "So You Want To See It," and witnessed Cartwright's attempt to masquerade as the abominable snowman. He followed Cartwright into the realm of the Lizard Men and helped him escape the Lizard Men's clutches. They were able to make their way back to surface world together.