Base of Operations: Currently unknown;
formerly Dandesh IV, in the outer regions of the Coal Sack nebula;
formerly mobile in space aboard his starship;
formerly a Greek isle;
formerly the planet D'Bari IV, in another galaxy

Powers/Abilities: Vuk possesses the standard strength and abilities of a D'Bari including an extremely long lifespan (measuring it in centuries rather than years). He can reproduce sexually and asexually by budding, but the latter only every thousand years.

Wearing the Starhammer magnified his strength, lifting at least 10 tons. The Starhammer armor had psionic shields and was immune to most physical attacks. It could presumably be used in outer space due to its sealed environment. Starhammer employed a variety of weapons, including an energy club and an incineration gun.

His chief weapon was the Petrifactor, able to turn anything into stone for 100 hours. When set to overload, its power pack can affect everything within one hundred thousand miles. The energies of petrifaction and de-petrifaction are the same, and thus a second exposure will revert a previously petrified victim to normal. 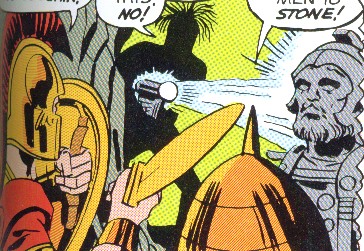 History:
(Avengers I#4 (fb)) - Centuries ago (@ 500 BC), the D'Bari Vuk's ship suffered engine failure and he crashed to Earth, embedding itself at the bottom of the 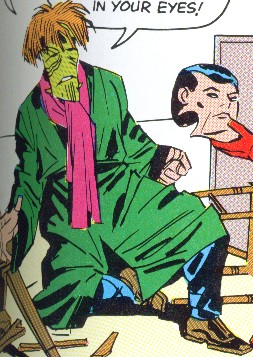 (Avengers I#4 (fb) - BTS/Saga of the Sub-Mariner#8) - In the modern era, Namor, fleeing after his battle with the Avengers (per Avengers I#3) stopped off at a looming island. Sighting some human figures, he went to investigate, and was shocked to discover that they were made of stone. The statues resembled human fishermen.
Vuk caught Namor by surprise and blasted him, but the ray had an attenuated effect on Namor.  Namor made an alliance with Vuk against the Avengers, promising to free his ship if he would turn the Avengers into stone.

(Avengers I#4) - Disguised as a photographer, the D'Bari petrified the Avengers--Giant-Man (Pym), Iron Man (Stark), Thor, and the Wasp--as they returned to New York. The newly revived Captain America had lagged behind them and was thus spared. Joining forces with Rick Jones, Cap managed to identify the likely culprit by his weapon in an enlarged photograph, and they tracked down the D'Bari. Cap dodged his petrifaction blast and disarmed him, at which point the D'Bari surrendered and explained himself. Cap forced him to restore the Avengers to normal, after which they brought his ship to the surface of the Sea. As the D'Bari repaired his ship, Namor led an Atlantean attack on the Avengers. However, when the D'Bari took off, Namor and the Atlanteans mistook the lift off for a sea quake and fled.

(X-Men I#135 - BTS) - Vuk had not yet reached home when Phoenix, hungry for power, consumed the D'Bari sun, destroying D'Bari IV and all of its inhabitants including Vuk's family.

(Sensational She-Hulk I#46 (fb) - BTS) - Vuk happened upon a group of Xartans (the Carbon Copy Men), they all adopted the D'Bari form, pretending to be a D'Bari outpost (on Dandesh IV, in the outer regions of the Coal Sack nebula). They did this hoping to elude the wrath of the Skrulls, who sought vengeance on them for..."infringin' on their franchise."

(Sensational She-Hulk I#46 (fb) - BTS) - Rocket Raccon landed on the outpost, and after he saw one of the "D'Bari" relax his form for a second, the D'Bari and the Xartans knew they had to stop him.

(Sensational She-Hulk I#44 - BTS) - She-Hulk allowed herself to be captured by the "D'Bari," and she was brought to the same cell as Razorback and Taryn, as intended.

(Sensational She-Hulk I#45) - As She-Hulk and Razorback compared notes, Razorback prepared to state that the "D'Bari" were imposters, but the real D'Bari turned him to stone before he could get the words out. Vuk intended to intimidate the She-Hulk and Taryn into explaining why they were there, but the She-Hulk tried to use an Ovoid mind-transfer technique to contact her ally Weezi Mason aboard an orbiting Skrull ship. This backfired, swapping instead the build and powers of the two women.

(Sensational She-Hulk I#46) - Weezi and the Skrulls--who recognized the Xartans' ruse--beamed down to Dandesh IV, where Weezi freed the She-Hulk and her allies. Unwilling to see "his people" (the Xartans, his replacement family) destroyed again, the D'Bari set the power pack on his Petrifactor to overload. She-Hulk and her allies successfully escaped the petrifaction effect, returning after it had subsided to recover Razorback and Rocket Raccoon. The Skrulls, the Xartans, and Vuk were all petrified.

(Wolverine II#136) - Vuk and Bzztl were being held on Prisonworld when Wolverine arrived. Vuk recognized Wolverine as being one of the X-Men, and in his rage over Phoenix destroying their planet, attacked him. Wolverine easily threw him to the side. Wolverine then explained that he was there to help them break out, and Vuk accepted an invitation to join him.

(Wolverine II#137) - The cell Vuk and Bzztl were residing in was inspected by some of the Collector's agents while searching for Wolverine.

(Wolverine II#138 - BTS) - Vuk went missing during Galactus's consumption of Prisonworld and was not among the escapees. 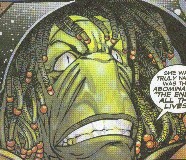 (Uncanny X-Men I#387) - During the events of Maximum Security, the D'Bari, now wearing powerful armor and calling himself Starhammer, joined a few expatriate Imperial Guardsmen (and Borderers) in ambushing the X-Men. Starhammer confronted Phoenix (Jean Grey), recognizing her as being different than the Phoenix Force which had destroyed his planet, but blaming her nonetheless as she had summoned the Phoenix Force and her personality had shaped its form as Phoenix. Resisting her power, Starhammer tossed Jean to the ground and prepared to kill her. However, in desperation, she managed to pierce his shields, reach his mind, and deceive him into thinking he had succeeded in killing her. His vengeance seemingly achieved, he dropped to the ground, overwhelmed by the shock.
The X-Men planned to remove and destroy the Starhammer armor.

(Maximum Security#3 - BTS?) - The D'Bari may have been one of the many aliens on Earth released when the heroes of Earth defeated Ronan and the Ru'ul. 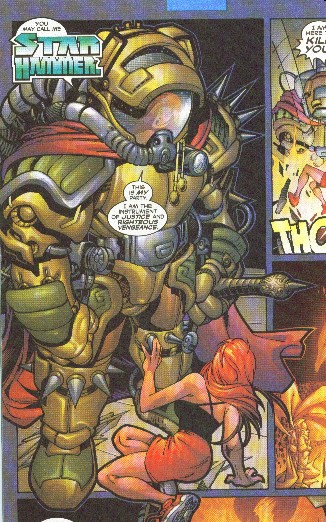 In OHotMU 2006#3 it was revealed that Starhammer was indeed the same character as the "Medusa" D'Bari and the D'Bari father seen in Wolverine II#136-138. He also got a name: Vuk. His son from the Wolverine issues was given the name Bzztl. Further information was added to the profile from the OHotMU entry like the D'Bari's reproduction process and the inclusion of the Classic X-Men story.

As originally written, Avengers I#4 made it appear that there never was a Medusa of Greek myth, but rather the D'Bari inspired the legend.

It's pretty hard to tell which appearances in the Sensational She-Hulk contain the actual "Medusa" D'Bari, so I'm listing him as BTS unless it's clearly him, either by speech or by carrying the Petrifactor.

Pretty much all of the aliens active on Earth during Maximum Security were inmates from interstellar prisons banished there by the Intergalactic Council. The specifics of how Vuk ended up in prison and how he got the armor are both unknown. It is also possible that he came to Earth during that time coincidentally.

Some other guy made his first modern appearance in Avengers I#4...can't seem to remember who that was...

Thanks to Madison Carter for reminding me about the Wolverine appearances.

Starhammer received his own profile in X-Men: Phoenix Force Handbook (September, 2010). The main image by Gus Vasquez was mostly based on Uncanny X-Men I#387, p17, pan1 (see to the right).

This profile was split from the D'Bari profile again and a bit updated by Markus Raymond.

The "Medusa" D'Bari was mistaken for:

(Wolverine II#136) - Bzztl and his father Vuk were being held on Prisonworld when Wolverine arrived.

(Wolverine II#137) - Bzztl and Vuk's cell was inspected by some of the Collector's agents while searching for Wolverine.

(Wolverine II#138) - Bzttl, Wolverine, and many others managed to escape.