Location/Base of Operations: The few remaining natives are scattered throughout the known universe;
formerly the planet D'Bari IV, Shiar Galaxy

Powers/Abilities: One D'Bari was present on Earth for approximately 2500 years, suggesting perhaps a lifespan measured in centuries, rather than years.
They could reproduce sexually, as well as asexually by budding, but can only do so every thousand years. They appear to have gills and may be amphibious. They were averse to physical contact with others.


They have access to interstellar starship and weapons such as the Petrifactor.

Traits: The D'Bari are apparently peaceful by nature, though the destruction of their planet has driven the survivors towards vengeance against Phoenix, and hatred towards humanity in general.

The D'Bari encountered believe themselves to be the last survivors of their race, and appear unaware of the existence of the others (see comments).

History:
(Uncanny X-Men I#387 (fb)) - The D'Bari existed as a both ancient and thriving peaceful culture within the sphere of influence of the Shi'ar Empire.

(Avengers I#4 (fb)) - Approximately 500 BC, a D'Bari crash-landed on Earth, his appearance and Petrifactor weapon causing him to be mistaken for the gorgon Medusa.

(Avengers I#4 (fb) - BTS/Saga of the Sub-Mariner#8) - In the modern era, Namor made an alliance with the "Medusa" D'Bari against the Avengers.

(Avengers I#4) - The "Medusa" D'Bari turned the Avengers to stone, but was discovered and exposed by Captain America, who forced him to restore the Avengers to normal. The Avengers helped him repair his ship and he left Earth.

(Classic X-Men#43/2 (fb) ) - After the Phoenix died on the moon and found herself with Death, she found herself at one point reliving the life of a woman on D'Bari IV just before she destroyed it as Dark Phoenix. As Gvyn, Phoenix was walking with two other D'Bari women who were trying to fix her up with a boy Gvyn met at school, and Phoenix protested that she didn't need a mate-maker.

(X-Men I#135) - A ravenous Phoenix consumed the sun of D'Bari, killing everyone on the planet. A few off-planet natives survived, though apparently unaware of the existence of each other.
These actions were observed by a Shi'ar imperial battle cruiser, whose crew included Eluke and Juber. They engaged Phoenix and were similarly destroyed, but not before sending a message to Lilanda, Majestrix Shi'ar.

(Sensational She-Hulk I#43-46) - The "Medusa" D'Bari encountered a group of Xartans (Carbon Copy Men), who invited him into their midst and took the form of D'Bari to escape the Skrulls. The "Medusa" D'Bari and the false D'Bari encountered Louise "Weezi" Mason, Taryn O'Connell, Razorback, Rocket Raccoon, and She-Hulk. When the Skrulls attacked, the "Medusa" D'Bari overloaded his Petrifactor, turning the whole planet and everything within 100,000 miles to stone. The above heroes escaped petrification (and those who had been petrified were cured).

(X-Factor I#110 - BTS) - Extraterrestrial thief Jornik utilized a D'Baaran image inducer (which he may or may not have stolen from Lila Cheney's Dyson Sphere (meaning she most likely had stolen it from someone else) to adopt a human form (at least); however, at least by the time he encountered Strong Guy (Guido Carosella) on Earth, the device was glitching, and he finally gave up on it altogether.

(Nova II#15) - Tas'wzta was one of the members of the Nova Corps slaughtered by the Luphomoid Kraa.

(Wolverine II#136-138) - A D'Bari father and son were part of the Collector's "Prisonworld," which served as a hideout, cloaked from Galactus. The planet was eventually consumed by Galactus due to the interference of Wolverine and Aria. The youth was seen to escape, though the father was not seen during the destruction.

(Wolverine Annual 2000) - The bounty hunter Tyrus Krill hunted down a member of the D'Bari (apparently K'hari; see comments) at some point, and kept its body aboard his ship in a storage tank.

(Uncanny X-Men I#387) - During the events of "Maximum Security," a D'Bari, wearing a suit of armor and calling himself Starhammer, assaulted Phoenix (Jean Grey). She managed to telepathically make him believe he had slain her, and he went into an inert state after being overwhelmed by his apparent success.

When the Dark Phoenix Saga was adapted to the 1990's X-Men cartoon, the Dark Phoenix destroyed the D'Bari star system, but dialogue indicated that there were no lifeforms there. The episode should have had a disclaimer: "No Asparagus People were annihilated in the making of this cartoon. --Prime Eternal

The D'bari seen in Tyrus Krill's collection is K'hari, the lifemate of G'aspix. The British Marvel Heroes#33 (2011) features the D'bari hiring Death's Head (FPA) as part of an attack on Earth, and the leader of the D'bari, angry that his people hired a bounty hunter, reminds them that another bounty hunter took his lifemate from him, with an editorial note identifying the bounty hunter in question to be Tyrus Krill. Though the story is set in an alternate reality, I can't see the reference being anything except deliberate. And though alternate reality, in the absence of counter evidence, there's no reason to believe the 616 victim of Krill would have a different name.
--Loki

CLARIFICATIONS:
The D'Bari should not be confused with: 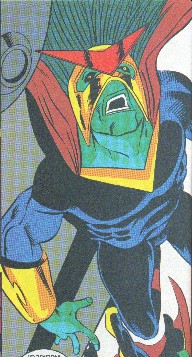 He was a member of the Xandarian Star-Corps, containing members from dozens of worlds and systems which had been ravaged by acts of war or piracy. He was slain by the Luphomoid Kraa, who sought vengeance for the death of his brother, Zorr. He was injured alongside several other Corpsmen, and his surviving ship mates left for a neighboring planet to lie in ambush for Kraa. He was found dying aboard his ship by the Skrull Corpsman Muraitak, another Corpsman named Grot, and Nova (Richard Rider). Nova blasted Kraa's ship, but the resulting explosion destroyed the Nova-Ship as well, and Tas'wzta presumably perished with it.

He presumably had some degree of Nova power, including flight, superhuman strength (enhanced human to Class 10) and durability, etc.

In the Shi'ar galaxy, within the domain of the Shi'ar empire, it was one of eleven worlds orbiting the star D'Bari. Though only inhabited planet, it was destroyed when Phoenix consumed its star.

The star D'Bari was a G-Type (similar to Earth's sun), with a diameter of one million miles, a surface temperature of 6,000 degrees Centigrade, with a core temperature of 14 million degrees. It took about ten minutes from the time that Phoenix consumed the star to the time the D'Bari saw the effects, and shortly thereafter they felt the heat flare, which boiled away the planet's atmosphere and oceans. The planet was quickly consumed in the resultant super-nova explosion.