Instigator: Unknown. It was presumably initially instigated by either Ben Grimm or a member of the Avengers, and has been regularly scheduled since.

Purpose: A regular gathering of super-humans and friends, mostly (but not exclusively) Avengers and Fantastic Four members and their associates, for an evening of poker.

Opposition: None. Though the games are frequently interrupted by one villain or another, none have been acting in opposition to the game itself. Those who have inadvertently caused games to be interrupted include Annihilus, Blastaar, the Mandarin, General Pollock, Psycho-Man, Space Phantoms, and the Super-Adaptoid.

History: (Marvel Two-in-One#51) - The Thing, Nick Fury, Jarvis, District Attorney Blake Tower, the Beast, Wonder Man, and Ms. Marvel (Carol Danvers) played at Avengers Mansion. This was apparently Wonder Man's first participation, and definitely Ms. Marvel's, but the others had all played in the game before. Ms. Marvel's participation made her the first woman to be in the game. The game was closed for the evening when Fury was called away (and took the others with him) in response to a raid by General Pollock, using the Yellow Claw's Sky Dragon, on the S.H.I.E.L.D. Heli-Carrier.

(Marvel Two-in-One#75) - The Thing, Jarvis, the Beast, Captain America, Hawkeye, Iron Man, and the Wasp convened at the Baxter Building. This was the Wasp's first participation (Jarvis had to make her a cheat sheet!), though the others had all played before. The game was interrupted when an emergency alarm brought a struggle to light in the Negative Zone involving Annihilus, Blastaar, and the Super-Adaptoid.

(Marvel Two-in-One#96) - Captain America assured a hospitalized Thing that the Avengers would postpone their monthly poker game until Ben was back on his feet.

(Marvel Fanfare I#24/2) - The Thing, Nick Fury, Jarvis, the Beast, Wonder Man, Blake Tower, Binary (Carol Danvers), Wolverine, and Captain Marvel (Monica Rambeau) were all in attendance at Avenger's Mansion. This was the first game for both Captain Marvel (who was new to the Avengers) and for Wolverine, who was brought by Binary. Binary fled the game when she learned of the death of the original Captain Mar-vell.

(Nick Fury, Agent of S.H.I.E.L.D. II#24) - Nick Fury, Captain America, Mr. Fantastic, and the Thing were all playing at the Fantastic Four's headquarters. The game was interrupted when Nick Fury received an emergency call from S.H.I.E.L.D. in regards to a series of attacks on international politicians, which turned out to be masterminded by the Mandarin.

(Wolverine II#53) - Nick Fury, the Thing, Wolverine, the Beast, and Gambit all played in Four Freedoms Plaza. The game was seen after Wolverine (with Mystique, Spiral, and Jubilee) restored the natural timeline after Mojo nearly destroyed it--Wolverine awoke in the poker game as his memories faded. Wolverine immediately had to leave the game to retrieve Jubilee, who awoke from the adventure in Tokyo.

(Strange Tales III#1) - Nick Fury, the Thing, the Human Torch, and Dr. Strange all gathered in Four Freedoms Plaza for the game. The game proceeded normally and was not interrupted--the four merely swapped stories over the course of the game.

(X-Men II#48)- The X-Men invited the Thing over to the Angel's Soho loft for a surprisingly peaceful afternoon of poker. Besides the Thing, those playing were the Beast, Storm, Iceman, Gambit, and Cannonball.

(Uncanny X-Men/Fantastic Four ’98) - On a Friday night at Pier Four, the Thing, the Human Torch, Wolverine, and Cannonball got together for a poker grudge match between Ben and Logan. The game was temporarily interrupted by a series of Psycho-Man robots (and eventually by the real Psycho-Man), but resumed later that evening.

(Avengers: The Crossing#1) - Hawkeye, Giant-Man (Hank Pym), the Beast, the Scarlet Witch, Quicksilver, and Crystal all gathered in Avengers Mansion to play. The game was more or less falling apart due to internal squabbling, but certainly ended when Gilgamesh arrived under attack from an apparently large number of superhuman men and women who were initially unidentified, then thought to be agents of Kang, but were eventually revealed to be Space Phantoms.

(Wolverine Annual 1999) - Wolverine, Captain America, She-Hulk, the Thing and Nick Fury played in Fury's apartment. Wolverine left the game for a beer run, but was sidetracked by the Hand and a draconic creature they summoned. When he finally returned hours later, he found the others sound asleep.

(Spectacular Spider-Man II#21) - A specialized version of the game occurred about once yearly when a number of heroes got together and played No Limit Texas Hold 'Em, with proceeds going to charity. This year's game involved the four regular members of the Fantastic Four, plus Spider-Man, Dr. Strange, the Angel (Worthington), and the Black Cat (in her first appearance in the game), with Dr. Strange's manservant Wong also in attendance. The game was crashed by the Kingpin, who was willing to gamble $50,000 of his own money for charity against the chance to humiliate the assorted heroes. Ultimately, Spider-Man won over the Kingpin in the final one-on-one facedown.

(Spider-Man/Human Torch#5) - Peter Parker joined the Thing and Human Torch for a poker night. Peter's Aunt May was present and baked cookies.

(Thing II#1) - Warbird, upon being asked by Wonder Man if she intended to go to the Thing's poker game on Friday, complained about Ben's making ludicrous bets due to his newfound wealth. The game was no fun anymore, and she was thinking about blowing it off. 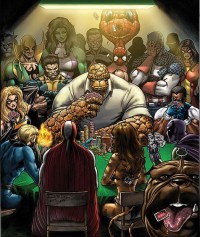 (Fallen Son: The Death of Captain America#2) - Following the death of Captain America, the renegade "secret" Avengers and the Thing got together for a poker game in the team's headquarters in what appeared to be an abandoned building. The players consisted of Thing, Luke Cage, Iron Fist, Spider-Woman (Drew), and Spider-Man. Also present, but not playing, were Wong and Dr. Strange. The game was briefly interrupted when Wolverine entered and got into a fight with Spider-Man due to their anger over Captain America's death, but play resumed after the pair departed.

(Wolverine III#73/1) - On a Wednesday, the Thing, Wolverine, Spider-Man (Parker), She-Hulk, and two others played poker. The Thing seemed to be doing best, and Wolverine worst. As the game neared its end, the pot included one of Spider-Man's web-shooters.

Though the game first appeared in Marvel Two-in-One#51, it is made obvious that this was not the first game--there had been several, if not many, games preceding that one.

The game was identified as monthly in Marvel Two-in-One#96, but Nick Fury said he'd see them next week in Nick Fury, Agent of S.H.I.E.L.D. vol. II#24. Based on this, and the frequent interruptions and changes in membership which the Avengers and Fantastic Four suffer through, it seems logical to assume that the scheduling of the game would change in frequency over time.

The common thread in this history seems to be "the game was interrupted when..." Presumably there have been many games which were not interrupted--those just don't make for quite so interesting stories!

There have been other poker games in the Marvel Universe, of course, but that does not necessarily make them part of the floating super-hero poker game as an ongoing organized entity. Some of the following fall into that category:

(Marvel Two-in-One#55) - After spending some time (two issues) trying to organize a poker game at Project: PEGASUS in his spare time, Ben finally succeeded. It was interrupted by a security alarm activated by Nuklo's "escape." Present at the game were the Thing, Quasar, Bill Foster (then Black Goliath), Jeannine O'Connell (Wundarr's therapist), and two unidentified Project: PEGASUS employees.

Something of interest in both of Cannonball's game appearances above: Cannonball claimed each time to have never played before, and both times ended up winning big. Hmmm...

(Incredible Hulk II#465) - The poker players were Bruce Banner, Tony Stark, Reed Richards, Doc Samson and Thunderbolt Ross. As Bruce described it to Betty: "In the old days, which may not exist anymore [i.e. Heroes Reborn], Tony, Reed and I used to have regular poker games. Leonard's just continuing to observe me whenever possible. And your father wants me to pay back the money for every tank I've ever destroyed... Remember when von Doom would sit in? Kept trying to toss world domination into the pot. You'd think that would have tipped us off."

(Howard the Duck III#1) - This issue begins with a poker game involving Howard the Duck, the Thing, the Frankenstein's Monster, the Man-Thing, and a two other "monsters" (possibly a small Fin Fang Foom and a miscolored Gorilla Man), but within two pages the game is revealed to be a dream.

An alternate Earth (Earth-98) version of the floating super-hero poker game occurred in Fantastic Four Annual '98, when a dimension-hopping Ben Grimm played at the Avengers Mansion with Dr. Strange, Wolverine, and Thor.

In the Poker tournament in The Thing II#8, a number of others were not seen at the poker game but were in attendance at the bar mitzvah which preceded it, quite possibly these others were playing but on other (non-pictured) floors. These include the Aquarian, Black Bolt, Dum Dum Dugan, Jacob Grimm, Petunia Grimm, the Invisible Woman, Justice (Vance Astrovik), Rabbi Lowenthal, Willie Lumpkin, Medusa, and Hiram Sheckerberg.

Thanks to Markus Raymond for spotting the Wolverine Annual story, Sean Curtin for the Hulk II#465 one and Thomas Wardlow for Fantastic Four I#584.

The floating super-hero poker game has no known connection to

Non-Marvel Copyright info
All other characters mentioned or pictured are ™  and © 1941-2099 Marvel Characters, Inc. All Rights Reserved.
If you like this stuff, you should check out the real thing!
Please visit The Marvel Official Site at: http://www.marvel.com/