Powers/Abilities: Born a mutant, Axe possessed enhanced strength, agility and stamina that made him a superior hand-to-hand combatant. In combat, he wielded an axe of unknown composition that he could swing with sufficient force to even throw the supposedly invulnerable Cannonball for a loop. Brutish and crude, Axe relied on his strength and size to intimidate his opponents. He proved sufficiently mentally resilient to withstand the effect of Mirage's fear inducing hallucinations.

(New Mutants I#7 (fb) - BTS) - The mutant mercenary Axe was hired by Sebastian Shaw to help kidnap Nina Da Costa, wife of Brazilian business man Emmanuel Da Costa who did not want her to go on an archeological expedition. Shaw figured that by helping Da Costa, he could convince him to join the Hellfire Club's Inner Circle. Axe travelled to Rio de Janeiro where Nina was preparing for her trip, along with her son Roberto and his mutant friends the New Mutants.

(New Mutants I#7) - Shaw's Hellfire Club agents kidnapped Nina and Axe stepped in to keep the New Mutants occupied. One swing of his mighty axe threw Cannonball for a loop in mid-blast, allowing the agents to get away. Sunspot engaged him, but he swatted the young boy aside. He was then attacked by Mirage who tried to subdue Axe with her fear images. Not scared, he slammed her aside as well. Wolfsbane quickly made a run for it, which convinced Axe that he had won. He hopped in a car and joined the Hellfire Club operatives in a nearby safehouse where they'd kept Nina. Later that night, Axe and the others were attacked by the New Mutants who'd tracked them down using Wolfbane's enhanced senses. A furious Sunspot, fuelled by seeing Axe threaten his mother, went all out and beat the mercenary. 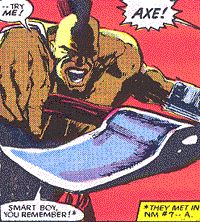 (New Mutants I#29 (fb) - BTS) - Axe joined the band of underground fighters known as the Gladiators. When Sunspot and Magma ended up prisoners of the Gladiators' leader Flynn (secretly the Shadow King), a vengeful Axe offered to attack Sunspot to give everyone a demonstration of the youth's powers.

(New Mutants I#29) - Axe briefly fought the surprised Sunspot in his cell, overpowering him and even choking him with his axe handle. Their struggle was interrupted by "Flynn" who had seen enough and welcomed Sunspot to the Gladiators. Later that night, during the evening's performance in front of a sold out arena (including the other New Mutants in disguise), Axe teamed with Max Rocker in a match against new arrivals Sunspot and Magma. Their fight was interrupted by the arrival of Magneto, who had come to collect the New Mutants to prepare for the threat of the Beyonder. Despite the obvious threat, Sunspot and Magma elected to stay behind, their choice was backed by the Arena's latest addition, the mutant Dazzler. Axe, knowing better, stayed out of the discussion.

(Wolverine II#164 (fb) - BTS) - Axe ended up in the superhuman prison known as the Cage through unrevealed circumstances. In order to stay alive, he quickly allied himself with the Brothers, a faction of dark skinned inmates who banded together. Their most hated rivals were the Skulls, a group of white supremacists who worship the Red Skull. Axe soon became one of the bodyguards of Mo Money, a former rap mogul who got incarcerated after using superpowered operatives to intimidate his competitors.

(Wolverine II#164) - Aware a bounty had been placed on the Cage's newest inhabitant Wolverine, Mo Money had Axe attack Logan when he got into a fight with a member of the Skulls. Axe tried to stab Wolverine, but missed and accidentally killed one of the Skulls. This escalated the conflict, with all the Brothers and Skulls joining the fight.

(Thunderbolts I#159 (fb) - BTS) - Axe, Mo Money and another member of the Brothers were eventually transferred to the Raft.

(Thunderbolts I#159) - Axe and the others attacked Crossbones in the Raft gym, eager to make the white supremacist pay for his crimes. Crossbones was saved by Man Mountain Mario. Before the fight could continue, the Juggernaut's transformation into Kuurth destroyed the Raft. Agreeing to a temporary truce, Axe and his crew joined with Crossbones and Mario to attempt an escape. It didn't take long for Crossbones to betray all of them. He killed Axe, Mario, Mo Money and the remaining Brother. Their bodies were later discovered by Raft security.

Axe started out as an unfortunate Mr. T knock-off and went downhill from there...

Axe originally had a sub-profile in the Gladiators' entry written by Elf with a Gun. Her scan of Axe among the Gladiators was taken from there.

CLARIFICATIONS:
Axe should not be confused with

Non-Marvel Copyright info
All other characters mentioned or pictured are ™  and © 1941-2099 Marvel Characters, Inc. All Rights Reserved. If youlike this stuff, you should check out the real thing!
Please visit The Marvel Official Site at: http://www.marvel.com

Special thanks to www.g-mart.com for hosting the Appendix, Master List, etc.!