Base of Operations: None;
formerly the New York City sewer system

Powers/Abilities: The Angel possessed no known superhuman abilities, but was an adept hand to hand combatant who was remarkably spry for his advanced years and apparent lack of exercise or access to proper nutrition living as a vagrant in the sewers. The hard, unkind existence as a homeless man have made Halloway more than a little cynical and his bleak view of the world can be intimidating. Through unrevealed ways, he could make a halo appear over his head. Sometimes, this effect was perceived as a shadow or as an actual, illuminated object. 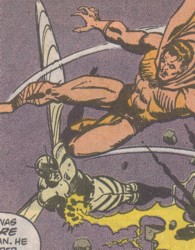 (Marvel Super Heroes III#7/2 (fb) - BTS) - Aware of the fact his half-brother Thomas was the superhero Angel during the 1940s, Simon decided to follow his example. He served in his half-brother's abscence (due to Thomas joining the V-Battalion) as the Angel and fought costumed criminals on a number of missions.

(Marvel Super-Heroes III#7/2 (fb) - BTS) - At some unrevealed point, Simon became a homeless vagrant, who after many undocumented (mis)adventures came to live in the New York sewers. There, despite his advanced years, he became the protector of a group of derelicts who gathered together in the sewers to survive.

(Incredible Hulk Annual I#20 - BTS) - Halloway and the others welcome the ostracized supervillain Abomination into their midst when he decided to retreat underneath the sewers. Some time later, Abomination rescued the lost and alcoholic Sandy from some muggers in Central Park. He invited the directionless girl for a visit to the sewers.

(Incredible Hulk Annual I#20) - Angel greeted Sandy as she was introduced by the Abomination to his underground community. However, when he undressed and revealed his true "monstrous" nature, she tried to flee. Halloway calmed her down and allowed Blonsky to make his case. He did so by telling Halloway, Sandy and the others a fairy tale based on his origins, his struggle with the Hulk and his ultimate goal. Eventually, Sandy fell asleep and was returned to the surface world, though with a reminder courtesy of the Abomination she was always welcome.

(Marvel Super-Heroes III#7/2) - Halloway was riding the subway when the Stinger's gang started to harass a passenger, trying to rob him of his money. When gangmember Stu (Stinger's grandson) pulled a knife and actively began threatening the man, Halloway intervened, easily beating back the gang members and even using Stu's own knife to kill him. After killing him, Halloway held the weapon in his hand and pondered what had happened, claiming "for years I was an angel, now I am an angel of death." As soon as the subway train hit the next station, Halloway was urged by the mugging victim to make a run for it even though he wanted to stay and wait for the authorities. Halloway was convinced to leave when the man claimed the authorities would only jail him. As he ran off, he was spotted by Jamal and Mark, who decided to track him and report back to the Stinger.

(Marvel Super-Heroes III#7/2 - BTS) - Enraged after learning his grandson had been killed, the aging supervillain Stinger soon realized the one responsible sounded a lot like his old enemy Angel. Supplying the gang members with electrical stinger devices just like he used in his old villain identity, the Stinger led the gang to the spot in the sewers Jamal and Mark had seen Halloway retreat to. Even as they prepared their attack, the vigilantes Cloak and Dagger teleported into the sanctuary, returning a little girl with her homeless mother who had been living there.

(Marvel Super-Heroes III#7/2) - After guiding the girl home, Cloak and Dagger were surprised by the Angel who grabbed Cloak's costume, reminding himself how long it was since he'd seen a garb like his. Annoyed at being touched, Cloak wanted to retaliate, but was stopped by Dagger who called Halloway "just an old man". Halloway then lectured the two young heroes on the nature of evil, revealing how he'd lost both his money and his family and that he'd been dragged down by evil, weighing him down like the force of gravity. He proceeded to explain to the young heroes they would never win their battle with evil, assuring them it would only drag them down like it happened to him. To add insult to injury, he made Dagger cry when he told her she wasn't immune to the effects of time and that "she'd die a sagging, withered old crone in a dirty white leotard".

Moments before the hurt and angered Cloak and Dagger were going to leave, Stinger and his gang attacked. The criminals used the Stinger's electrical weapons to kill people left and right looking for the Angel. With Cloak and Dagger dealing with the gang, Angel decided to handle the Stinger. Using the steam emanating from the sewer pipes for cover, Angel managed to get the drop on his enemy, though Stinger's electric blast almost finished him. However, by throwing Stu's knife into Stinger's chest, Halloway forced his foe to retreat. Chasing him on to the subway track, Halloway learned the man he had killed on the subway was actually Stinger's grandson. Even though Halloway apologized, Stinger kept on coming. After Angel briefly distracted him with a handful of dirt to the face, Stinger powered up his electric blasters to finish off the crimefighter. However, his weapon indirectly caused a chain reaction with the subway's electrified third rail, killing Stinger instantly. But just as Halloway went to examine the body, he was surprised by an oncoming, unavoidable metro train. Quickly embracing his seemingly inevitable fate, Halloway was surprised to find he had survived thanks to Cloak teleporting him out of harm's way. In the aftermath, he vowed to continue to serve as the protector of the sewer people and even promised to save a space for Cloak and Dagger who he had deemed his successors. The two vigilantes left, claiming that wouldn't happen for many, many years. As they disappeared, Halloway dryly added "... you hope."

(Incredible Hulk II#432) - Halloway, without revealing his identity, helped the Hulk (Bruce Banner) to track down the Abomination (who was still trying to rule over the New York sewers, thinking himself king and even killing some cops). While the Hulk tackled Abomination, he had taken two hostages (the assigned cop lieutenant Chase and his former acquaintance  Sandy). While the two gamma irradiated behemoths duked it out, Angel quickly led them to safety.

(Incredible Hulk II#432 - BTS) - The Hulk and the Abomination tore through a sizeable chunk of New York, with Blonsky finally tiring of the fight. Creating a diversion by causing a nearby news helicopter to crash, Abomination fled the scene, secretly observed by the Angel, Sandy and Chase.

(Incredible Hulk II#432) - Angel insisted Sandy should return to the surface world, claiming he knew she was meant for great light. Chase however, had a change of heart and decided to stay down in the sewers with Angel, figuring he had nothing up there except his job. The two left together, while the former officer's badge sank away into the sewer muck.

(Incredible Hulk II#433 - BTS) - The Angel sought out the Hulk after he had learned who was responsible for sending the green giant on the mission that led him into conflict with the Abomination that led to their initial encounter.

(Incredible Hulk II#433) - Halloway emerged from a sewer drain in Central Park near the Hulk's location. He told him that the police's raid on the sewers (which had angered Abomination) was orchestrated by a drug lord known as Wulf Christopher who had pushed for the raid among his political allies. Halloway then informed Hulk where he could find Chrstopher, before retreating to the sewers.

(Captain America I#422) - Zeitgeist, in his alternate identity as Everyman, killed Simon Halloway just as he was exiting a subway, believing he was actually his half-brother Thomas. Even though Simon, in his dying moments, tried to set the record straight, Everyman nevertheless insisted on recording the kill by taking a picture of his death.

Peter David originally intended the derelict Angel in his seminal run on Incredible Hulk to be the actual 1940s hero, though the powers that were at Marvel quickly torpedoed that notion, forcing David to reinvent him as his half-brother. Ever the stickler for continuity, not to mention eager assassins of any character he considered superfluous, Mark Gruenwald was the one to rather unceremoniously kill off Simon Halloway.

CLARIFICATIONS:
The Angel (Simon Halloway) is related to:

But should not be confused with: