Powers/Abilities: Xaphan is a powerful fire demon with an inventive mind that seemingly helped him escape imprisonment on various occasions. He could take possession of a mortal host, gaining full control over the host's abilities under ideal circumstances. He could switch host bodies at any point, but against his will could only be driven from a host with weapons forged in Heaven or Hell, a process that inevitable killed the host. Though he could only take full control over one body at a time he could spread his demonic influence to an undetermined number, a power that seemingly grew with the number of people under his influence. Though his pawns could live on normally they were forced to follow Xaphan's every command. With a growing power base his influence could spread over large areas like a disease, creating a demonic army under his control. Individuals under his control loose their souls after a certain amount of time (though the timespan is unknown all their souls would eventually end up in Hell).


(Nightcrawler III#3 (fb) - BTS) - Xaphan was one of 14 angels who stood by Lucifer in the war against God.

(Nightcrawler III#3 (fb) - BTS) - When Lucifer lost and was cast down, he fell into the pit (Hell), dragging his fourteen lieutenants down with him, and the fourteen angels became fourteen demons.

(Nightcrawler III#3 (fb) - BTS) - With Satan's most inner circle disrupted (presumably by Hellstorm slaying and usurping the role of his father, Satan/Marduk Kurios), Pazazu and the thirteen other demons were apparently freed from Hell.

(Nightcrawler III#4 (fb) - BTS) - Dr. Louis Childs learned about Lucifer's fourteen lieutenants from a book he purchased in Barnes & Noble's occult section. The book also described the ritual to free the demons, a ceremony requiring fourteen victims and fourteen sponsors (who would control the demons once they'd been loosed upon the world. Childs recruited 13 of his wealthy friends and neighbors, all residents of the Dakota building, convincing them each to sacrifice the life of a child in order to each have a demon at their service for 14 years. Childs took over the children's psychiatric ward at Metropolitan General Hospital, after which the participants (all of whom were wealthy New Yorkers, doctors, attorneys, diplomats, heads of foundations, etc.) each sponsored an orphan at Metro's psych ward admitted subsequent to Childs' takeover. 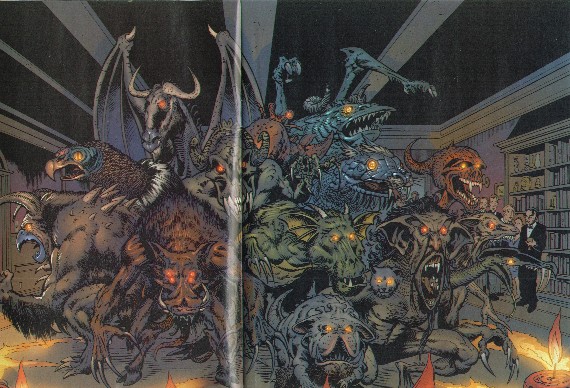 (Nightcrawler III#1 (fb) - BTS) - When Franks returned to check on the war, thirteen of the children had been torn to pieces, while the fourteenth child, ten year old Seth Walker, sat there unharmed, clutching a knotted rope. The security tape of the room showed the children playing, then four minutes of static, then the scene to which Franks returned. The tapes of the hallway showed four minutes of empty hallway, with no one either entering or leaving he hallway. The windows to the room were locked and unbroken.

(Nightcrawler III#1 (fb) - BTS) - Xaphan and the other twelve escaping demons left hoofprints burned into the roof at Metro, continuing from one building to the next, continuing on to the Dakota building.

(Nightcrawler III#4 (fb) - BTS) - Xaphan and the twelve other demons were captured by Childs' coven and placed within a mystical circle, but Seth's knot kept Pazuzu trapped within him. Without the 14th demon free, the coven was extremely limited in the magic they could perform, such as the odd menial task.

(Nightcrawler III#3 (fb) - BTS) - Louis Childs found Sandra Manning at a shelter, fed her, took her to his hotel, cleaned her up, and bought her new clothes. He then put the Xaphan and the twelve other demons inside of her to control her and make her pretend to be "Meredith Walker," who was supposed to be Seth's aunt.

(Nightcrawler III#2 - BTS) - Childs appeared with "Meredith Walker," claiming to be Seth's aunt, who said she would take care of Seth (though Nightcrawler briefly gained a glimpse of a demonic figure in her stead).

(Nightcrawler III#3 (fb) - BTS) - The demons proved too powerful to be fully contained/controlled within "Meredith Walker," and they almost broke free. They attacked Childs, who trapped them within a mystic circle.

(Nightcrawler III#3 - BTS) - "Meredith" attacked Childs on the streets outside Metropolitan General Hospital and commanded him to undo the circle, so they could free their last brother Pazuzu from Seth's body. Nightcrawler could not penetrate the circle Childs had formed, but he instead teleported within it. He then grabbed "Ms. Walker" and teleported her into a church. The holy power of the church expelled the demons from "Walker" and back into the circle.

Upon recovering, "Ms. Walker" revealed her name to be Sandra Manning, who had no memory of her adventures as Meredith Walker. With the aid of Magik's memory spell, she shared what had happened, and Magik deduced that the 14 demons were the lieutenants of Lucifer.

(Nightcrawler III#4) - Childs brought Seth to his coven in the Dakota building, where the other thirteen demons (including Xaphan) were trapped within their circle.

Nightcrawler and Shadowcat (Kitty Pryde) secretly replaced two coven members with Magik's aid. Pazuzu escaped after Childs cut the last knot from Seth's rope and Kitty Pryde used her powers to turn Seth intangible, thus preventing Seth's death. The rest of the Coven fled from Pazuzu (who was not trapped within a mystic circle) but were captured by the awaiting X-Men (Beast, Cyclops, Emma Frost, Storm, Wolverine). Pazuzu instructed Childs to free his brethren, but Childs refused, telling him that the freeing of the 14th demon placed them all in the coven's service. However, the demons revealed that the pact had not been fulfilled since the 14th child had not been sacrificed, and Pazuzu tore Childs to pieces. The containment circle around the demons began to dissolve, but Magik then arrived with nurse Palmer, who carried Seth's fourteen clay statues/jars, within which she bound the fourteen demons. Magik then took the clay statues to Limbo/Otherplace for safekeeping.

(Deadpool Team-Up#897 - BTS) - Xaphan somehow escaped (because nobody knew he was even there) and took possession of Lobster Boy (Ed McGrady), mayor of Gibsonton, and owner of the last freak show in America. Xaphan used his host's influence in town and unnoticed took mental control over many freaks. People started to disappear as Xaphan's influence spread to slowly build a demon army on Earth.

(Deadpool Team-Up#897) - Unaware McGrady was possessed by Xaphan the Bearded Lady Beatrice and her midget friend hired Deadpool to kill McGrady. Incidentally the Ghost Riders (Johnny Blaze & Dan Ketch) came to Gibsonton as well and Blaze immediately felt that something was wrong and upon seeing McGrady at his speech realized that he was possessed by the demon Xaphan. Deadpool shot McGrady in the head, but the possessed mayor survived and swore to get his revenge on him. Xaphan then sent the freaks after the normal people in town to round them up at the Big Top. Deadpool and the Ghost Riders joined forces to oppose Xaphan's horde, but due to their high number they were eventually forced to flee and come up with a new plan.

After the Ghost Riders explained to Deadpool that only a weapon forged in Heaven or Hell could drive Xaphan from McGrady's body and back to Hell and that the host would die as well in the process, Deadpool came up with a plan to infiltrate the freaks. He cut off his legs to enter the Big Top, but Xaphan smelt that Deadpool was not one of his freaks. Realizing the potential in Deadpool's regenerative body Xaphan, as planned by Deadpool, took possession of Deadpool. Because there were already three voices in Deadpool's head he could partially resist Xaphan's control. Using his right hand and leg to maim himself and open an entrance in the Big Top for the Ghost Riders, who drove Xaphan from Deadpool's body and back to Hell with their chains.

Xaphan was listed in Olivier & Lucifer's OHotMU profiles as one of Lucifer's Inner Circle, which retroactively made him one of the demons in the Nightcrawler series. This was as a result of suggesting him to be the demon Hellstorm fought before he was teleported away by Grandmaster in Marvel Super Hero Contest of Champions I#1 (see right), but unfortunately this info never made it into Hellstorm's profile and is therefore still unconfirmed. He also didn't make it one the list (though he was mentioned once again as a fallen angel) in the Demons entry in OHotMU HC#3. The demon from Contest of Champions was finally revealed as Xaphan in the update section of OHotMU SC#3.
--Markus Raymond

CLARIFICATIONS:
Xaphan has no known connection to: