Powers/Abilities: Vaguely humanoid, the Queega are homeothermic ("warm-blooded," able to maintain their own body temperature independent of the ambient temperature, within survivable range) reptiles, and are able to generate electrical energy around their heads, perhaps for protection. Queega breathe and speak through small orifices in their foreheads. They can also project intense waves of coldness from their hands (possibly by artificial means, see comments).

The Queega possess interstellar ships with warp drive and teleportation.
The Queega on Earth were equipped with a spaceship and a “sight-stealing ray”

Traits: The Queega are an exploitive race that send expeditions to blind the populations of planets and then teleport the entire mineral resources of those planets back to the Quolan solar system.

(Daredevil I#28 (fb) - BTS) - The aliens hovered above Earth for months, monitoring various tongues and dialects, and by using advanced memory fixation recorders, they mastered all they needed to know about the planet.

(Daredevil I#28 (fb) - BTS) - Professor Tom Brewster claimed to have sighted flying-saucers in the area of Carter College, and bought a gun for his personal protection.

(Daredevil I#28) - Brewster was investigating the wooded area around Carter College for proof of alien activity (to make everyone realize he wasn't mad, of course), when he discovered unusual footprints in the snow. Brewster then saw an alien, who commanded him to fire his gun at it, but his gun had no effect (...although it was never made clear exactly how the alien survived).

The gunshots were overheard by attorney Matt Murdock, who was visiting Carter College and delivering a lecture regarding the legal status on extraterrestrials on Earth (What a coincidence!). A group of people, including Murdock, went to investigate the shots and found Brewster in a state of shock. Brewster told them of the aliens and how they told him the whole human race was doomed.

Later, Murdock (as Daredevil) went into the same woods and encountered the aliens. They tried to use their "sight-stealing rays" on him, but the leader's "visionatory sensors" told him the rays were ineffectual and that the human (Daredevil) was already blind. After a brief struggle, the aliens fired a blast of cold at Daredevil, encasing him in a block of ice. The aliens then loaded the frozen hero into their spaceship and took off.

The ship flew to the location of the aliens' "conquest site," and while aboard the ship, the ice melted from Daredevil. The alien leader told the hero he was impressed with his courage and made him an offer to join them in their plans for conquest, even offering to restore his sight. For a time, Daredevil played along to learn more of the aliens' scheme.

After the ship landed at the "conquest site," the aliens activated a larger version of the "sight-stealing ray," which affected people worldwide. At this point, Daredevil rejected their offer, rather than betraying his world and become a murderous scavenger. During the ensuing struggle, the aliens fired another icy blast at Daredevil, but he ducked and the blast hit the ray projector instead, freezing it instantly. With the ray incapacitated, people's sight returned all over the world.

(Captain Marvel I#31) - After Thanos had acquired the Cosmic Cube and used it to capture Mentor, Eros, Iron Man, Captain Mar-Vell, Moondragon and Drax the Destroyer, the mad Titan could not resist bragging about what he had accomplished and what he was going to do.

As part of this boasting, Thanos showed his captives his fleet of space raiders that were ready to plunder Earth and were crewed by his personal horde of outcasts and criminals collected from throughout the galaxy. A Queega was shown to be part of this horde. 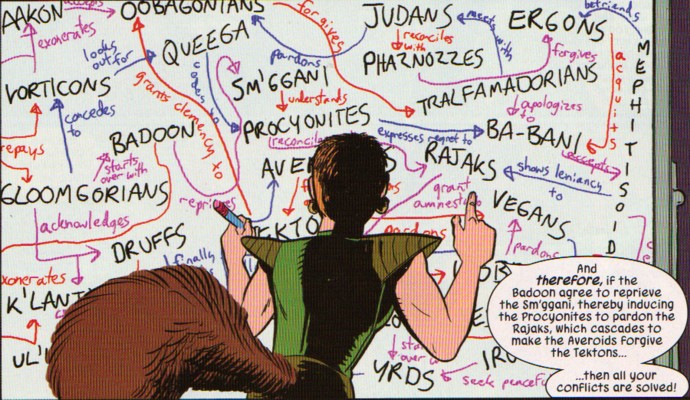 (Unbeatable Squirrel Girl II#29 (fb) - BTS) - The Queega were blackmailed by a fake Silver Surfer and his two fellow space-hunks. The Queega complied with their demands.

(Unbeatable Squirrel Girl II#29) - The Queega joined a fleet of 76 extraterrestrial races to get revenge on the Silver Surfer.

Squirrel Girl worked out a plan to fix the problems between the many races, including the problems the Queega had with the Procyonites and Vorticons.

The aliens were never actually named in this story ("Thou Shalt Not Covet Thy Neighbor's Planet!" -- that Stan, he sure could come up with some great titles!), nor was it mentioned from whence they came, but years later in the first edition of the Official Handbook of the Marvel Universe I#8 (August, 1983), they were finally named as the Queega, and accompanying information about them and their homeworld was included.

In regards to the Queegas' coldness projection, one of the aliens stated "The WEAPON we fired at you..." which implies to me that their coldness projection was achieved through technological means rather than it being a natural ability -- that, and the fact that one of the Queega was shown activating a control on his belt with one hand while he fired the icy blast from the other.

I'm surprised that Kurt Busiek didn't bring back the Queega in the Maximum Security mini-series.

Hadith is a Muslim term.
--Per Degaton
Wikipedia: Hadith are oral traditions relating to the words and deeds of the Islamic prophet Muhammad.
--Markus Raymond

And a big THANK YOU to Dennis Giansante for scanning this story for me!

CLARIFICATIONS:
The Queega have no known connections to