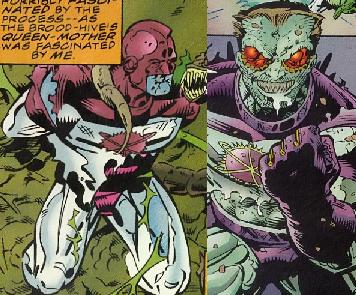 Group Membership: The Kree military, specifically the crew of his unnamed ship

Affiliations: The Brood, particularly his own Queen and mate;
his own Brood Nest (the crew of the Pama, the crew of his unnamed vessel, Zen-Pram - all deceased);
formerly The Kree Empire, Yon-Rogg and the crew of his vessel

Enemies: (After meeting the Brood Queen) The crew of the starship Pama, Mar-Vell, Una, Yon-Rogg, Zen-Pram (all deceased);
The Kree Empire;
all non-Blue Kree

Base of Operations: An unnammed planet in the Absalom Sector Formerly the planet Hala

First Appearance: The Untold Legend of Captain Marvel#2 (May, 1997)

Powers/Abilities: Devros was a military genius and high-ranked officer, possesing enough knowledge of Imperial Secrets, that the Supreme Intelligence was willing to kill him rather than have his knowledge fall into enemy hands.

Brood Powers: Superhuman Strength, Speed, Durability and Agility, he also maintained much of his original personality after being infected, likely due to the fact that he gave himself willingly to the Queen as a Consort.

Weaknesses: Devros was a rampant bigot, believing Blue Kree to be superior to all other species and races, after his Brood assimilation, he came to believe that the Brood were the Blue Kree's only equals. He was also completely insane, and believed that his infection was all part of a grand scheme by the Supreme Intelligence to evolve the Blue Kree to perfection by inter-mixing with the Brood to produce a Master Race. 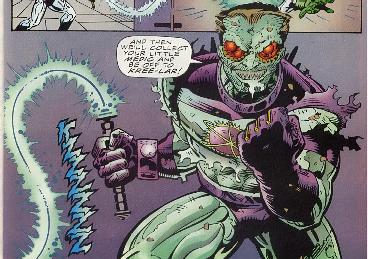 Zen-Pram was right in calling Devros a racist - too bad he himself was guilty of the same mistake. Devros did not deny the accusation; on the contrary, he was proud of it.

A Brood King? Well, we know that the Brood do have both genders, but this is the only mention of a male Brood holding such a position. The Brood are a Matriarchal Society, with the Empress as head, and Queens of various rank ruling in her name over their own Brood Nests. Other than Devros, the highest ranking male Brood shown have been the Firstborn, the Empress' personal guard and special assassins. Devros may be unique as a male Brood holding such a rank of authority. Even if a Brood host is male that doesn't mean that the Brood itself is, Harry Palmer, for instance, was a human male, but the Brood within him was a female, a Queen, so he was referred to as a Brood Queen. Both Devros and his Brood symbiote/parasite, however, were male. It was his mate, the Brood Queen, who was capable of infecting others with eggs, however - we got no evidence that Devros had that capability at all. Devros was wonderfully drawn, inked, colored and designed, and is truly a fascinating, if short-lived, character.
--We don't know that he actually had any rank in the Brood Empire, but just chose the name himself due to his power and arrogance--Snood.

A minor note: During The Brood Saga @ Uncanny X-Men#162-166, Shi'ar Majestrix Lilandra was completely unaware of the Brood's bizarre form of parasitic reproduction, even though this took place years after this encounter.

As the Kree survivors were rescued by her sister, Deathbird, and the Imperial Guard, it seems like it would have been known in the Shi'Ar Empire, at the very least the Royal Family should have had some knowledge of the Brood's true nature, even if Deathbird had been plotting against her family at this point the Imperial Guard would have dutifuly informed the Majestor, Deathbird's father (or D'ken, the time is unrevealed).

Devros was right, the Kree are really no better than the Brood, the same is true of Shi'ar, Skrulls, and yes, humans, or any others who conquer and enslave others. In fact, the Brood at least have good reason, the survival of their race depends upon conquering others, making them Brood, it is instinct, not greed or hate, that drive the Brood. I wish we could say the same.

Clarifications: Devros is not connected to

also, he should not be confused with

His mate, the Brood Queen, should be distinguished from other Brood Queens, including

and from other characters with similar concepts, including:

The Kree ship Pama should be distinguised from

For more details on those characters, click on the links and/or look on the sites of our links page. 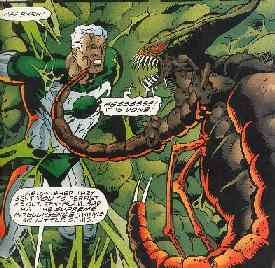 Devros' Brood Queen lived on an unnamed planet of the Absalom sector. She and Devros took a liking to each other. She and her Brood killed or infected apparently all of the surviving crews of both Devros' ship and the Pama. Devros was the only one who willing accepted that infection. She was killed by Captain Mar-Vell.
--Untold Legend of Captain Marvel#2 (including fb)