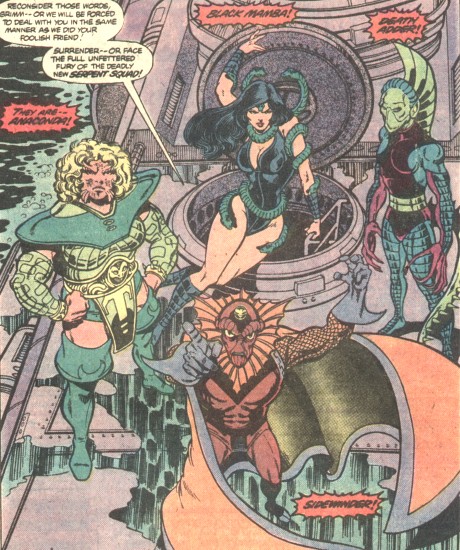 Affiliations: employed by Roxxon Oil; created by the Brand Corporation, a Roxxon subsidiary

History: (Marvel Two-in-One#66 (fb)) Hugh Jones, under the influence of the Serpent Crown, arranged for the creation of his own Serpent Squad to retrieve a second Serpent Crown, previously abandoned in the Pacific Ocean by the Avengers, who had returned with it from the Squadron Supreme's world.

(Marvel Two-in-One#66 (fb, bts)) Roxxon set up an oil rig in the Pacific Ocean to mask its search for the Serpent Crown, and sent the Serpent Squad there to lead the search.

(Marvel Two-in-One#64) Flying over Roxxon's false (and unusually located) oil derrick, the Thing and Stingray stopped to investigate. An underwater explosion, set by the Serpent Society, unbalanced the derrick and the pair acted to save it. Stingray, beneath the derrick, was attacked and incapacitated by the Serpent Squad.

(Marvel Two-in-One#65) The Serpent Squad sneak attacked the Thing, and while he was distracted they took the unconscious Stingray hostage, using him as leverage to allow them to capture the Thing. While the Thing and Stingray tried to get free (with the aid of Triton), the Squad searched underwater and Anaconda located the crown. Sidewinder escaped in his air-sub with the Serpent Crown, and the other three snakes were buried in an undersea rockslide.

(Iron Man I#160 (fb)) Anaconda freed herself, Black Mamba, and Death Adder from the rockslide.

(Iron Man I#160) Anaconda, Black Mamba, and Death Adder invaded the Long Island Zoo to steal a Stark Enterprises microscanner which could power a weapon created by the snakes' employers. The Squad freed many animals as a diversion and killed several zoo employees, but were ultimately caught and arrested by Iron Man.

(Captain America I#309) The Serpent Squad members contacted a number of other snake-themed people, specifically Cobra, Princess Python, and the Constrictor.

(Captain America I#310) From the membership of the Serpent Squad and many other serpent-themed individuals, Sidewinder organized the Serpent Society, officially marking the end of this Serpent Squad.

In Captain America Annual#10/2 (1991), it was revealed that Bushmaster (a Serpent Society member) was also created by Roxxon, and in fact was recruited by Seth Voelker, also known as Sidewinder. However, Bushmaster never actually served beside the Serpent Squad on missions. Voelker acted here as a Roxxon executive, not as Sidewinder (in fact, this may take place before he became Sidewinder).

It seems likely that some or all of the Asp, Cottonmouth, and Rattler may also be Roxxon creations (though Asp's file was in a separate dossier when Sidewinder organized the Serpent Society, which may be a strike against this possibility in her case). Bushmaster's origin shows that Roxxon created other serpents besides the Serpent Squad; no origins have been given to date for these three; and Sidewinder was at least familiar with them and knew how to contact them when forming the Serpent Society. Similarly, Fer-de-Lance has claws nearly identical to Bushmaster's, lending support to a possible Roxxon origin for her as well. Again, however, none of these ever acted as part of the Serpent Squad.

In Captain America I#308 (1985), Anaconda refers to the Serpent Crown Affair as their "first job together," which tells us there are no untold Serpent Squad adventures predating the Marvel Two-in-One story.

In Captain America I#310 (1985), we learn that the empowerment of the various Serpent Squad members occurred at the Brand Corporation, a Roxxon subsidiary located on Long Island.

The employer of the Serpent Squad in Iron Man I#160 is never revealed. It may well have been Roxxon, but it may just as easily have been someone else. Considering the monetary investment which Roxxon must have made in creating the Squad, it seems unlikely that they'd let them go very easily, but the Squad is completely at loose ends by their Captain America appearances. One supposition is that since Jones created the Serpent Squad, this may have been a personal project of his and when he was institutionalized after he lost the Serpent Crowns, the serpents he created were cut loose by the new management.

The Serpent Squad shouldn't be confused with:

Non-Marvel Copyright info
All other characters mentioned or pictured are ™  and © 1941-2099 Marvel Characters, Inc. All Rights Reserved.
If you like this stuff, you should check out the real thing!
Please visit The Marvel Official Site at: http://www.marvel.com/