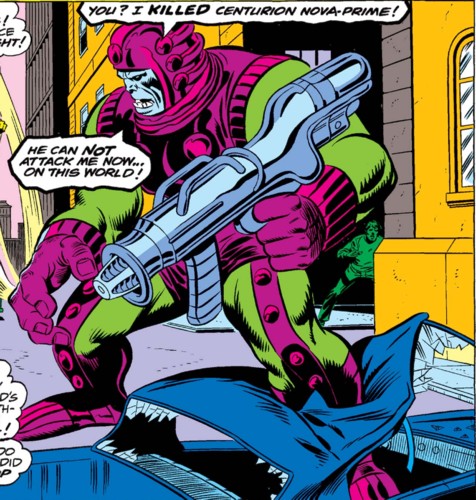 Base of Operations: Formerly the home planet of the Luphomoids; later the planet Xandar, intergalactic space, and New York City.
mobile in his starship

Powers/Abilities: Zorr possesses vast power. He is at least 10-12 feet tall and likely ranges somewhere in the Class 75-100 strength and durability range--he could knock over an entire building. He carries a large hand held energy weapon, which projects bursts of concussive force.

History:
Xorr is a Luphomoid, an extremely power race of apparent warriors/conquerors. It is uncertain whether his level of power ir representative or if he is a mutant or mutate. His brother, Kraa, possesses similar or even superior powers.

(Nova I#1(fb)-BTS) - Galactus drained the life energy from the homeworld of the Luphomoids. Only those who were at the time invading another world survived. Zorr was one of these few survivors--vowing vengeance on Galactus.

(Fantastic Four I#204 (fb))  - Zorr's starship appeared in the Tranta System, shrugged off Xandar's Nova Corps and destroyed most of its fleet, and then began to syphon the energy from the planet Xandar to use against Galactus.  As a last-ditch effort the Nova Prime ship, piloted by Centurion Nova-Prime Rhomann Dey, attacked Zorr's ship. Though he was unable to save Xandar, whose internal stresses tore it apart, Dey managed to drive off Zorr, apparently before he could syphon all the energy he required.

BTS - Dey hounded Zorr from one star system to the next, consistently preventing him from carrying out his plans.

(Nova I#1(fb)-BTS/Nova III#1(fb)
Zorr finally crushed the Centurion Nova-Prime, Rhomann Dey, the last of the resistance, but was either unable to obtain the energy he needed from Xandar, or the quantity of energy he obtained was insufficient.

BTS - Zorr next traveled to Earth, planning to make it his next target. However, Rhomann Dey survived, though paralyzed and mortally wounded, and his drones brought enabled him to pursue Zorr to Earth.

(Nova I#1) - Zorr went on a rampage in New York City, where he encountered Richard Rider, to whom Dey had transferred his power, costume, rank, and responsibility. The neophyte Nova was unable to damage Zorr in any way, but he did distract him sufficiently so that Dey could use his Nova-Prime Starship to lock onto Zorr, teleport him aboard, and disintegrate him by channeling the ship's full power into him. Dey used up the last of his energy in the process of doing this and expired as well, leaving behind only the empty costume of Zorr on the floor of his ship.

In Nova III#1, Erik Larsen had Nebula claim to be the daughter of Zorr. My fellow editor, Prime Eternal, and I have debated Nebula's ancestry. However, since I own the site, I say I'm right and he's wrong!
Well, that's only partially true.

Different sources have described Zorr's purpose in attacking Xandar and Earth as seeking energy to (1) replace that Galactus had stolen from his own planet, (2) gain enough power to avenge his race on Galactus. I think these could be considered his dual goals.

Kraa, his brother, @ Nova II#15, has no known connection to:

Presumably designed by the Luphomoids to raid other worlds, Zorr's starship could fire an energy beam that would drain all the geothermal energy from a planet.  It was also so heavily armed and armored that it destroyed most of Xandar's fleet and killed many members of the Nova Corps, without seeming damaged in the slightest. It also dwarfed the Nova Prime starship, which was itself a mile long.