Identity/Class: Human, empowered by The Beyonder

Base of Operations: Los Angeles, California

Powers/Abilities: Thundersword possessed the ability to "conceive" himself as a superhuman being. This ability gave him the power to create his winged steed, Boromir, as well. Using the sword as a conduit, Thundersword displayed superhuman strength, and was able to use the sword to tear through brick and metal.

History:
(Captain Marvel X#10 (fb) - BTS) - TV writer Stewart Cadwall had many problems with his employers, who treated him like trash. They blamed him for all the problems they caused, but always took credit for the success. They made him feel worthless despite his success and when he stood up for himself they called him difficult, crazy or hostile.

(Secret Wars II#1) - Stewart Cadwall was on the phone with his agent, arguing the merits of including more violence in his television scripts, when the essence of the Beyonder arrived, intrigued by Cadwall's angry voice. The Beyonder sought to learn more about humanity, and when Stewart marveled at his powers and wish he had them, the Beyonder distributed some of his to the man, through a Shazam Award Cadwall was wielding as a weapon. Transforming into Thundersword, a character he once created, Cadwall decided to lash out at the mediocrity of the world. He then created a winged steed he dubbed Boromir, and flew off.

Thundersword attacked the NBC studio, upset that they had forced him to rewrite some of his scripts. Several members of the X-Men and New Mutants arrived, believing him to be the Beyonder. Before they could attack, Thundersword did the same, and then turned his attention to the McDonalds they crashed through. Captain America and Iron Man arrived shortly thereafter, and engaged Thundersword in combat. When Captain America threw his shield, knocking the sword out of Thundersword's hand, he reverted to his normal form (and the sword reverted to the Shazam Award). Powerless, Cadwall was overcome with the realization that he'd destroyed the place he worked at.

(Iron Man I#197) - When Iron Man delivered Cadwall to the local police, Cadwall realized that the power the Beyonder had bestowed upon him wasn't in the award, but rather, in him. He reverted back to Thundersword and formed a new sword, busting out of the jail. He also reformed Boromir, and flew off on the winged steed. When Iron Man tried to stop him, Thundersword quickly defeated him and left. Realizing his armor was no match for Thundersword, Iron Man contacted Tony Stark, and the two of them came up with a plan to imbue the armor with more power through a generator. With the extra strength, Iron Man easily resisted Thundersword's blows, and knocked him into the ocean with one punch. When he went to retrieve Thundersword, he was nowhere to be found.

(Captain Marvel X#8 (fb) - BTS) - Stewart survived and claimed to have lost his sword. He was arrested, but was eventually released on parole. He married and fathered two children. Because his former career was over after his attack on the studio as Thundersword, he became a bartender. He watched the children during the day while his wife went to work.

(Captain Marvel X#10 (fb) - BTS) - The Master of the World secretly jump-started the energy build-up in Stewart's award that had been empowered by the Beyonder.

(Captain Marvel X#8) - Captain Marvel stormed the Cadwalls' home with Ms. Marvel, Black Panther and a few soldiers at her side. Stewart and his wife were shocked and protected their children. Captain Marvel had to stop a soldier from shooting the family dog while she sent Black Panther to retrieve whatever was emitting the strange energy. Black Panther found the award that had served Stewart as his power source in the past. Stewart claimed that he had lied about losing it because it was the only thing he had left from his former career and was a reminder of a time when he was good at something. He had no plans of using it again and didn't even know that there was any power left in it. Stewart was arrested for parole violation. His wife and children were inconsolable.

(Captain Marvel X#8 - BTS) - Captain Marvel personally drained the remaining energy from the award and took it to Alpha Flight Station for storage. She noticed that something externally had activated it. She also asked Henry Gyrich to get Cadwall released, but it was out of his jurisdiction. Danvers was mad that Cadwall was held under a seven figure bail he couldn't afford.

(Captain Marvel X#10 - BTS) - The Master of the World, undercover as Alpha Flight board member Philippe Beaulieu, used the award to gain the power of Thundersword.

A really cool looking villain. Too bad he only lasted two months before disappearing. Perhaps he's still out there somewhere, retaining the power the Beyonder gave him.

In Secret Wars II#1, the Shazam Award, which Cadwall apparently won for one of the shows he wrote, had a clear base with trapezoid sides. In Iron Man I#197, it had a solid brown base that was vertically high and rectangular in shape. Maybe Iron Man picked up the wrong object after the fight?

Obviously, the Shazam Award, with it's lightning bolt, is in homage to the Fawcett/DC character Captain Marvel.

Marian fell asleep while the Beyonder was in their home, and giving Stewart superpowers. Some girlfriend. Perhaps she fainted? 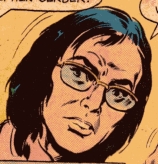 Thundersword/Stewart Cadwall is based on comics writer Steve Gerber, who was working in television at the time. Don't believe me? Compare Stewart Cadwall to a photo of Gerber in the 1980's. --Shad Z. Daly

See another Gerber image for comparison:

Thundersword got a full entry in Marvel Legacy: The 1980s Handbook.

THUNDERSWORD has no known connections to

BOROMIR has no known connections to

MARIAN has no known connections to

Boromir was Thundersword's winged steed. An artificially-created being, Boromir disappeared when Thundersword first lost his powers, and was recreated when he regained them.

Stewart's girlfriend, she was watching one of the cartoons he wrote for when the Beyonder appeared. She fell asleep shortly thereafter.

Non-Marvel Copyright info
All other characters mentioned or pictured are ™ and © 1941-2099 Marvel Characters, Inc. All Rights Reserved. If you like this stuff, you should check out the real thing!
Please visit The Marvel Official Site at: http://www.marvel.com/