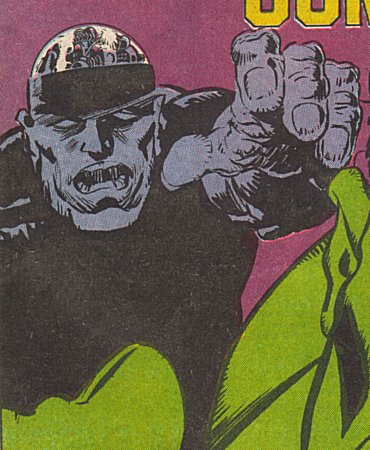 Affiliations: Built by Professor Latimer and the scientists at the Lake Charles Research Station

Enemies: The Hulk, Sergeant Kyle and his State Troopers

Powers/Abilities: The android had superhuman strength (level unknown, but enough to give the Hulk a run for his money) and was designed to cope with outer space conditions. Its brain casing was vulnerable. 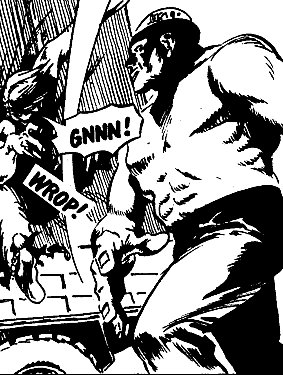 History: (Hulk Comic#5/1 - BTS) - Professor Kyle and his fellow scientists built an android designed to work on deep-space projects -- space stations, space labs, and so on. However an error occured during the installation of its brain, and the android went berserk and escaped into the swamps surrounding the facility. It wrecked everything that crossed its path.

(Hulk Comic#5/1) - Local state troopers, led by Sergeant Kyle, set up road blocks to look for the escaped creature (although they were told it was a dangerous lunatic). Bruce Banner was hitching a lift in one of the trucks that was stopped, and rather than face the authorities, he made his way into the swamps. After a brief skirmish with troopers in his Hulk persona, he returned to his Banner identity near some military vehicles, only to run into the android, which grabbed him and lifted him aloft.

(Hulk Comics#6/1) - The android threw Banner against a truck, then struck at him, narrowly missing his head. Simultaneously Sergeant Kyle, sitting in the cab of the truck, was on the radio getting the truth of the situation out of Professor Latimer, confirming the origins of the creature that had been stalking the area. As Latimer finished explaining, the android threw Banner into the back of the vehicle, and moved forward to drag Kyle out of the front. But as he manhandled the trooper, the Hulk emerged and grabbed the android. 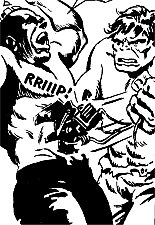 The android gripped the Hulk's arms and threw him over its head, then rushed forward and delivered a high kick to his face. The Hulk staggered back against a nearby building, and the android charged him. The Hulk dodged to one side, letting the android smash into the edifice, which collapsed on it. Some of the debris smashed its brain casing open, and as the damaged machine staggered around, the Hulk moved in for the kill, ripping its guts out and smashing it to pieces. Moments later, Professor Latimer arrived on the scene to find his creation littered around the swamp floor, the wreckage surrounded by huge, mysterious footprints.

CLARIFICATIONS:
Not known to be connected to nor should it be confused with:

Professor Latimer has no known connection to:

Sgt. Kyle has no known connection to: