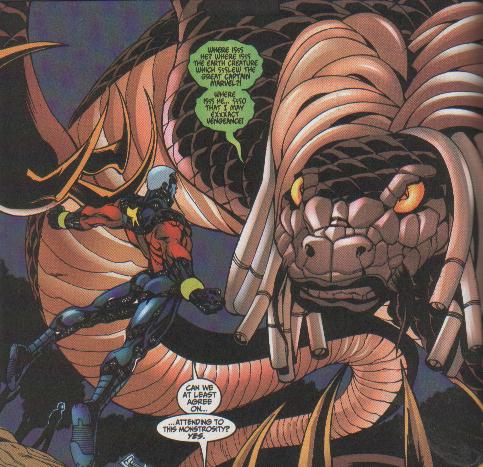 Powers/Abilities: The Hyssta are huge, at least one-hundred feet long, and have proportional strength and durability (Hyssta have been observed shrugging off powerfulblasts from Captain Marvel).  They also are able to spit a potent venom from their mouths.  In addition, they have a very keen sense of smell, allowing them to find prey even if they are blinded.  They do not deal too well with tar though.

Limitations: The Hyssta are apparently not immune to the corrosive nature of their own venom.

Traits: The Hyssta are gargantuan and snake-like in appearance, despite the presence of their two arms.  They have talons on their fingers, scaly hides, forked tongues,  and apparently something like hair growing out of the top of their head and each side of their mouths.

History: Nothing is known about the history of the Hyssta, except that they claim to have walked the Earth when ancient lizards (dinosaurs?) ruled the Earth.  If true, it is not known why they left or when (See Comments).

(Captain Marvel V#1) - Shortly after this, a space ship landed on Earth.

Later, Captain Marvel was questioned by police because of his behavior, but he was ultimately asked by them to help against a giant monster tearing up the streets.  He flew to attack the monster, learning a few things about it during their encounter.  The Hyssta, as it identified itself, said that his kind walked the Earth long ago when men were still in trees and giant lizards ruled the Earth.  The Hyssta stated that he was Captain Marvel son of a great warrior of the same name.  Captain Marvel (Genis) contradicted this, saying that he himself was Captain Marvel, son of Captain Marvel.  Because of this misunderstanding, a fight ensued.  They fought on for a little while, until Captain Marvel dodged the Hyssta's lunge.  In turn, the Hyssta fell into the Le Brea tar pit.  He refused Captain Marvel's help and died in the pit.  Later, another Hyssta swore vengeance on anyone that would harm their hero Captain Marvel, adding that a ship was coming to retrieve the captain.

(Captain Marvel V#5) - Kelly was revealed to have carved what appears to be a Hyssta into her skin.

It was never made very clear exactly what the Hyssta were.  Since one Hyssta claimed to be Captain Marvel, son of a warrior of the same name, my guess is that they are from another dimension where in place of humans, there are giant snakes.  However, there are holes in this theory, since the Hyssta also claimed to have roamed the Earth when man was still in trees.  Also, they seem much more violent than what their human counter-parts might have been.  This raises the question of whether or not they were actually extra-dimensional counterparts of the Kree, since Captain Marvel was a Kree, and the Kree did come to Earth a long time ago.

On this matter Carycomix suggests: I think both of your theories are correct.  They probably represent an other-dimensional counterpart of the blue-skinned Kree, some of whom landed on (and explored) a prehistoric PARALLEL-Earth!  It's equally probable that the explorers fell under the influence of the Elder God known as Set, and became Serpent Men.  Upon returning to the Kree homeworld, they similarly contaminated the rest of their race.  Or, perhaps, just enough of it to cause a civil war that forces loyal to the Supreme Intelligence eventually won.  Result?  Exile and evolutionary divergence.  Sort of like the Dire Wraiths stemming off from the regular Skrull Deviants.

The Hyssta that disappeared in Captain Marvel V#0 was never actually there.  Captain Marvel's cosmic awareness was going out of control and he saw the future.  I have no idea what the Hyssta were there for in the first place, though they may have been summoned by Kelly.

I would also like to point out that a Hyssta claimed to have walked the Earth.  I may be wrong, but I didn't spot any legs on those things.  I have doubts as to whether they actually were on Earth before, but I assume that when they say they were here when giant lizards ruled, they mean dinosaurs.
I'm going with them just being figurative in "walking" the Earth.

In the Tarzan stories, Snakes were called histaah.
--Per Degaton

Profile by Stunner and Kyle Sims

Clarifications:
Captain Marvel, the Hyssta, and his father, with the same name, should not be confused with: