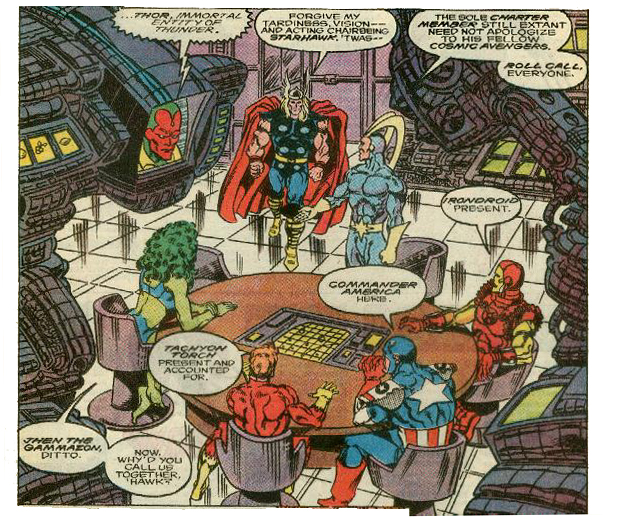 History:
(Avengers I#233-254) - After battling Annihilus, the Vision lay comatose; Starfox established a mindlink with ISAAC the super-computer of Titan. As a result, the Vision formulated a plan to take over Earth for the good of mankind and usher in a new "Golden Age". With Isaac's help, the Ultra-Vision used the Encephalatron Chair to plug his mind into every computer on Earth and became the Ultra-Vision.

(What If? II#19) - At the U.N., the Vision laid out his plan to humankind. Nuclear weapons were broken down, large solar power stations were put up (with Reed Richards' help), the global economy grew. X-Factor helped the homeless; Black Panther eradicated famine in Africa; Thor restored the rain forest. The world became united.

The superheroes of the Earth then helped conquer Outer Space: a reformed US Agent worked on a permanent space station; later, Wolverine helped the New Mutants planted the United Earth's flag on Mars.

(What If II#19/1) <In the year 2136> After learning of a Kree-Skrull pact to attack Earth from Starhawk, Ultra-Vision gathered Earth's greatest heroes, the Cosmic Avengers, aboard the spaceship Henry Pym. The group set out to attack the Kree and Skrulls before they could use Halley's Comet to destroy the Earth.

Starhawk attacked Supremor and killed him. Commander America attacked a large group of Kree. Tachyon Torch and Jhen the Gammazon attacked a squadron of Skrull soldiers, who fled. Irondroid faced the Super-Sentry, who crushed him. Torch then melted the Super-Sentry. Thor fought Mega-Skrull, who turned out to be a robot and overheated.

Back aboard the Henry Pym, the team mourned the death of Irondroid, while the Vision told them that the people of the Kree and Skrull homeworlds were overthrowing their rulers, hopefully for new, more peaceful regimes to follow.

(What If II#36 - BTS) - Thor returned to Asgard; Starhawk left the team to engage in space exploration; a new Irondroid joined the Cosmic Avengers. Earth continued to prosper under the guide of Ultra-Vision.

(What If II#36) - Commander America, Jhen the Gammazon, Tachyon Torch and Irondroid appeared to subdue what they thought was a ship of Skrull raiders, but after boarding were captured by the Guardians of the Galaxy plucked from an alternate timeline and mind-controlled by Korvac. The cyborg was himself secretly controlled by the Time-Twisters (disguised as the Time-Keepers) in order to destroy Ultra-Vision, that reality's nexus.

Korvac mesmerized the Cosmic Avengers. Then he used them as a Trojan Horse to enter Ultra-Vision's heavily-guarded headquarters on the Martian satellite, Deimos. As Korvac plugged into Ultavision, the latter broadcast an alarm to John Fury Jr, the current head of SHIELD on Earth.

SHIELD invaded Deimos but the combined powers of the Cosmic Avengers and the Guardians of the Galaxy were nearly too much for them, until the Whisperer (Immortus in disguise, trying to thwart the Time-Twisters) told John Fury how to releasse the Avengers from their hypnotic state.

Due to their alien physiology, the Guardians remained under Korvac's hypnosis. As the Avengers and Guardians clashed, one of them realized something was wrong. Yondu, whose mystic senses were always heightened, jumped in the way of a blast meant for Jhen and the Torch, and John Fury was able to awaken the remaining members after modifying his ultrasound gun.

United, the teams rushed to Ultra-Vision's monitor, where Korvac's image had replaced the android's. The teams were then attacked by a "murdermeks", but Yondu directed Irondroid to Korvac's body. Irondroid plugged himself in and reversed the broadcast of Korvac's unique mental patterns. Korvac sensed his defeat was near and directed the robots to attack Irondroid, but it was too late. With a yell, Korvac's face was replaced with Ultra-Vision's again... This time, dead. That counted as one victory for the Time Twisters.

The Cosmic Avengers saw the Guardians of the Galaxy off back to their own timeline. But the Whisperer then plucked Irondroid from this reality.

The Time Twisters speculated that this Earth could not survive with Ultra-Vision, but the Watcher secretly knew that it would.

(What If II#39) - After helping to defeat Immortus, Irondroid was returned to the Cosmic Avengers, who welcomed him back.

Why on Earth would John Walker have ever become US Agent (as he is specifically named) in a world ran by the Vision? Did the US Government still replace Cap in this world, and why would the Vision have allowed that to happen? Just wondering if there was a behind-the-scenes reason for this one.
--TJ Burns
My thinking was that, in that world, nations would become like regions in old Europe, say Corsica, Britanny, Sicily, the Basque etc. which as we all know feel very strongly about their regional identity. So the USAgent(s) were really a corps of space pioneers, space exploration being the US's strong suit, as say, Celtic music and making really tasty crepes are Britanny's, and the astronauts you see in the art are all USAgentsS (with an S) but this didn't quite make it in the final copy.
--JM

The Whisperer told John Fury that if Korvac managed to conquer the Ultra-Vision, first all Earthmen would be turned into hypnotized slaves, and then the galaxy would be turned into an orgy of war and destruction as Korvac sought to expand his rule. His assaults would cause both Kree and Skrulls to overthrow the peace-loving regimes fostered by the recent war and to become belligerent again.
It remains to be seen whether Immortus was merely saying this to get Fury to fight Korvac with all of his power, or whether he was actually granting a true glimpse of the future of Earth-90110.
--Snood.

Clarifications:
No known connection to:

Non-Marvel Copyright info
All other characters mentioned or pictured are "  and © 1941-2099 Marvel Characters, Inc. All Rights Reserved. If you like this stuff, you should check out the real thing!
Please visit The Marvel Official Site at: http://www.marvel.com