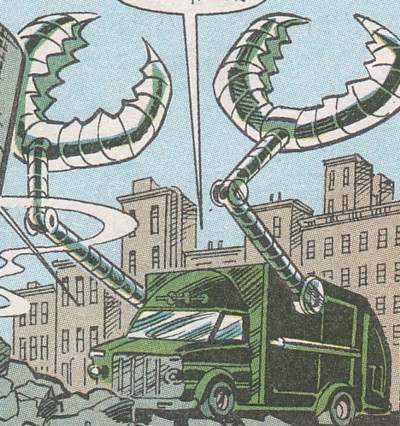 User/Possessors: Marcus and his Unit

Powers/Abilities/Functions: It is a big truck with pincers. The pincers are strong enough to lift the vault of a bank.

History: Marcus and his unit stole the truck from an army base. They drove into the city to the Bank of America, crushed the wall and grabbed the vault of the bank. They drove off with a vault full of money.

(Marvel Comics Presents#94) - Marcus and his Unit drove through the streets of New York and Marcus praised his brilliant plan. Suddenly the truck stopped and the soldiers saw the Thing. Marcus ordered to open fire and they did so. The Thing didn't move and the driver dropped the vault on the Thing. The Thing lifted it up, jumped onto the truck, and destroyed it. The last man to get knocked out was Marcus by a flick of the finger from Thing.

The Thing was really mad because Marcus and his Unit ruined his planned holiday by stealing the money. I named the truck only Crab Truck because of the pincers. Otherwise I would call it Crap Truck. Does this truck look like it carries something to the next dump or not? And in my opinion the truck is still more important than his users.

Clarifications: Crab Truck should not be confused with: 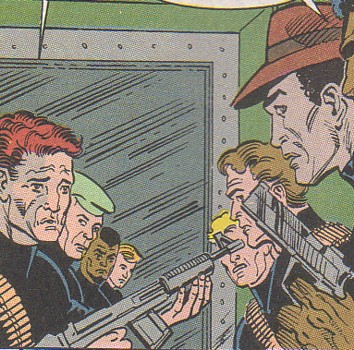 Marcus and his Unit 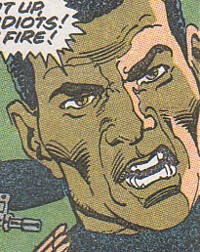 They stole the truck, they used it to rob a bank. Were they soldiers? I'm not sure. They had military equipment and their outfits looked like they liked crawling in the dirt. Were they stupid? Definitely! The truck and the vault were very noticeable and I think Thing didn't had to search too long for them.

Roger (redhead on the right picture)

Van Damme (it isn't clear, if it was just a strange way to cuss or if one of the guys is really named like that)