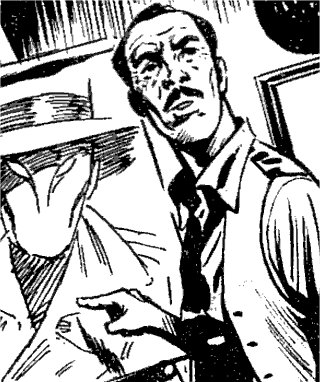 Powers/Abilities: Doyle is a normal human, with no exceptional traits displayed in his appearances. Having risen to be a Captain and been given the job of catching Night Raven, I presume he is probably a reasonably good detective. He also seems to be a decent, if not superhuman, marksman.

History: (Hulk Comic#7/6, BTS) - As the Night Raven cut a swathe through the city's underworld, Police Captain Doyle was given the brief of bringing the vigilante's illegal crimefighting activities to a close. The officer started gathering every scrap of information he could about the vigilante, hoping to identify him.

(Hulk Comic#7/6) - Captain Doyle gathered several of his men, Detective Nolan among them, and updated them on what was known about Night Raven. Nolan asked why they were trying to stop someone who seemed to be on the same side as them, aiding law and order. Doyle responded that to allow anyone other than the police to enforce the law would end in chaos. Then he stated that he believed that Night Raven had to have a strong personal motive for his actions, and told his detectives to start going through the files he had gathered, looking for clues to the origin of that grudge against crime.

(Hulk Comic#10/6) - Later that same night Nolan stumbled on to Night Raven, as well as an illicit hooch operation. He called to the station for back up, and minutes later Captain Doyle and several cars full of police officers raced to the scene. As they arrived, Doyle, riding on the lead vehicle's running board, spotted his officer holding a wounded arm and enquired as to the situation. Nolan informed him that there had been gunfire, and that their target was involved. 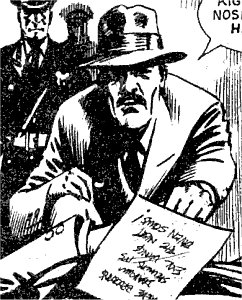 (Hulk Comic#11/6) - Doyle entered what proved to be local crimelord Mr.Big's speakeasy, little realising that both the gangster and Night Raven had gone out the back exit seconds earlier. Unaware that several of his men were engaged in a brief shoot-out with Mr.Big, and that Night Raven was fighting for his life against an assassin in the alley behind the building, mere feet away, Doyle leaned against the bar and lamented the failure of the raid. His belief that everyone had gone was proven violently wrong only an instant later, when a shot shattered a cup resting on the counter next to his elbow. Two of Mr.Big's thugs, left behind in the confusion, had decided to shoot their way out before the cops started a search.

Doyle's quick reflexes and accurate marksmanship took one attacker out almost immediately, and, seeing that he was outnumbered, the second crook took flight. Doyle and the other cops in the room pursued him out into the alley behind the speakeasy. In the darkness it appeared to be empty, but Doyle cautioned his men to be on their guard, even as he cocked his own gun. Reacting to the creak of an outhouse door behind them, they turned and fired together...and a man they had not seen before stumbled out, fatally wounded. As their victim, Night Raven's would-be assassin, fell to the ground, one of Doyle's men pointed out Night Raven's brand on his forehead. Doyle leaned forward and plucked a pinned note from the corpse's chest - another of Night Raven's calling cards.

I love this guy's incredibly literal introduction. The text states "Captain Doyle had spent a long time building up a picture of Night Raven", and immediately below this, we do indeed, have Doyle pointing at a sketch of Night Raven perched on an easel in his office.

Even though he shot and killed the Assassin, I haven't listed that hitman as one of Doyle's enemies, since he shot the Assassin dead by accident, and didn't know who he was.

CLARIFICATIONS: No known connections to and not to be confused with