Base of Operations: The City (probably Chicago or New York)

Powers/Abilities: Skilled at cheating at cards. 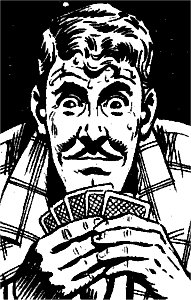 History: (Hulk Comic#5) - Ace Diamond was an expert card sharp. While playing a game at Fat Freddie's Pool Hall with three other men, he cheated and took them for three thousand dollars following his sixteenth win of the evening. Figuring that any more was pushing his luck, Ace attempted to gather up his winnings, only to have one of the other players grab his arm. Sure enough, cards flew from his sleeve. As Ace's three opponents started beating him up, a man playing pool over on the other side of the darkened room expressed the opinion that the odds were unfair. One of the three pointed a gun at him and told him to mind his own business; the pool player's response was to send one of the balls flying, striking the gunman squarely on the head and knocking him out. He then moved forward to take on the other two players, revealing himself clearly to be the vigilante Night Raven. After finishing off the other two crooks, Night Raven saw that Ace had grabbed the money off the poker table and was now holding a gun on his rescuer. Ace slipped out the room, and locked it behind him, leaving Night Raven stuck inside to face the wrath of the now re-awakened and armed trio. 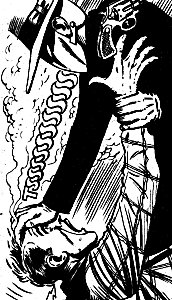 (Hulk Comic#6) - Several nights later Ace was holed up in a dingy hotel, with a growing itch to find another game. A knock at his door preceded a note being slipped under it, inviting him to attend a big poker game at room 715, the Hotel Central, eight o'clock. Arriving prompt and on time, Ace was feeling lucky and confident of a big win, but when he walked into room 715, he was greeted by the sight of his three opponents from the pool hall, seated and dead at a poker table, with the Night Raven's mark burned into each of their foreheads. The vigilante shut the door behind the terrified Ace, and offered him one chance; they would play a game of poker and if Ace won, he could go free and take the money. But if he lost...

Sweating, Ace was massively relieved to see that he has been dealt three kings, and went all in with his initial hand, but Night Raven had three aces (all marked with his symbol), winning the game. Angry at losing (and probably believing, rightly, that Night Raven must have rigged the hands), Ace grabbed for his gun. Wrenching Ace's gun away with his left hand, Night Raven branded the luckless gambler on the forehead with his right. The vigilante left Ace's body in its seat, with his trademark note on the table in front of the seemingly dead gambler.

Night Raven apparently went to the trouble of getting a deck of cards made up with his symbol in the centre of the Aces. He obviously knew exactly where all four of his intended targets were staying, as he had notes hand delivered to them, but he doesn't just go get them; nope, he has to draw them out in an elaborate and theatrical manner. I guess he got his kicks from it, and he clearly had way too much time on his hands.

Speaking of the notes that draw the players to the Hotel Central: Ace was staying in a fleapit, in spite of having three grand in cash on him (and this is in the 1920s or early 30s, so that's a lot of money). I take this to mean he was hiding out for a bit because he was unsure of who might have survived the fight in the pool hall and could be looking for him. Then, just as he was thinking to himself that he needed to find a new game, someone conveniently slips an anonymous invite to one under his door. And he doesn't smell a rat?!? I reckon Ace must be the kind of guy who, if he were to receive an anonymous note saying "Come to the deep well around midnight. Come alone, tell no one where you are going, and bring rope." would not only turn up, but he'd take along a few heavy rocks to make it easier for the writer to weigh his corpse down.

The cover to the Night Raven GN House of Cards homages this story, as it features a playing card with Night Raven's sigil on it.
--Per Degaton

CLARIFICATIONS:
Ace Diamond has no known connection to:

Fat Freddie has no known connection to: