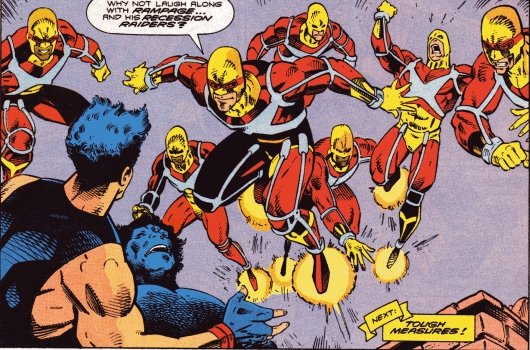 Base of Operations: Los Angeles, California

Powers/Abilities: The Recession Raiders wore exoskeletons composed of experimental lightweight and flexible alloys and reinforced by the same magnetic fields (to join the assorted mechanical components) as Iron Man's armor. They were powered by miniature generators. They flew via boot jets at up to 150 mph, but could also use Ionic Jet Packs to achieve high-speed and powerful flight, but the packs only had enough fuel to last for a limited time. While wearing the suit, they were strong enough to lift and throw a bulldozer (Class 10) and had enhanced durability.

History:
(Wonder Man II#5 (fb) - BTS) - Homeless and living on the streets, Clarke designed a device that could control one of his Rampage exoskeletons (still stored in the old facility), but it would only work if the costume was already on. Every time he walked past Pactech, he tried out his device in hopes that they might be using the exoskeleton.

(Wonder Man II#5) - Clarke complained to his friend August about the state of the economy. Walking past Pactech, he tried his control device, but received no response. One of the technicians at Pactech heard Clarke's costume clicking, and they soon after turned it on to run a few tests. When he walked past again, Clarke tried his device, and this time he gained control of the suit. Clarke had the suit break out of the building and come to him, after which he donned it, returned to the research lab, and took the other suits Pactech had designed.

(Wonder Man II#5 - BTS) - Clarke delivered the other exoskeletons to six of his homeless friends (August, Paco, Ronnie, 3 others unidentified), who became the Recession Raiders.

(Wonder Man II#6) - Clarke struck Wonder Man, who--irate over the Beast's injuries--fought back savagely against him and the Recession Raiders. Clarke soon directed the others to assault the helpless Beast so Wonder Man would leave himself defenseless while protecting his friend. Wonder Man eventually recovered the Beast and took off with him, challenging Rampage and the Raiders to try to stop him, but Clarke wisely realized they didn't need to risk defeat or capture. He instead encouraged them to follow him in a plan for economic justice.
He led them into Pactech and discussed his plan to battle the approaching police to gain publicity so that he could then sell his inventions and the technology they were stealing from Pactech to the international black market; he delighted in the irony that the same countries who had ruined America's balance of trade would pay him for American inventions they had gobbled up through corporate piracy. Then, after he had turned his Raiders into a super-army, they could return, drive off the foreign investors, and lead Americans to retake their economic destiny.
August and the other Raiders were a little uncertain of the soundness of Clarke's plan, and he tried to rally them with further discussions of becoming national heroes, the dream of technocracy, power to the fittest, and wealth to the inventors. Feeling they were in this deep, they accompanied Rampage out to attack the police helicopters, but they were soon assaulted by Wonder Man, who took down a number of the Raiders. Clarke exhorted the last two Raiders, August & Ronnie, to tackle Wonder Man, but they decided they'd rather escape with the suits than risk a beating from Wonder Man. The hero then crushed Rampage's jets with a flagpole, denounced Clarke's monetary goals in favor of the value of life and friendship, then dismantled his suit and beat him into submission. Police swarmed the downed combatants, and Pactech technicians informed them how to deactivate the suits.

(Wonder Man Annual I#2/1) - Inside the hideout, Hitmaker pounded away on the gangsters, until his own brother, Mariano, held a gun to his head. But before too much could happen, Wonder Man and Beast busted into the building...but the two Recession Raiders who had escaped Wonder Man (back in Wonder Man#6) followed them in and grabbed Mariano, helping him escape the heroes. Wonder Man leapt after them, but Hitmaker grabbed his leg, sending him crashing to the ground. Hitmaker said that even though he wanted them caught too, it was still his brother.

(New Avengers I#35 (fb) ) - The Hood invited many villains to a Chinese restaurant in Brooklyn, where he offered each of them $25, 000 in seed money to join his villain army. Among the villains was the Recession Raider (probably Ronnie or a Skrull or Ronnie was a Skrull all along) Hood soon proofed himself to the others by beating up Tigra for Jigsaw, who filmed it. Hood showed the video to the other villains, who were mostly impressed enough, to join him.

It is unknown whether the Skrull seen in Recession Raider armor in Secret Invasion I#7 was actually one of the original members of the Recession Raiders or a replacement of one of them. It is possible that he was the same Recession Raider that attended the meeting in New Avengers I#35. The most likely pick for the meeting is Ronnie IMHO because he fled the battle in Wonder Man II#6 alongside August while still wearing the armor.

Rampage as part of Hood's army (or how to ignore everything else but your own writing twice)
In New Avengers I#35 (December, 2007) Brian Michael Bendis used a list of villains to join the Hood's cause. Among those villains was Rampage, who was working with the Punisher at the time in Punisher War Journal Volume 2 (January, 2007 - February, 2009). Because this was kind of a problem it was later revealed in Avengers, Thor & Captain America: Official Index of the Marvel Universe#15 (2011) that it was one of the Recession Raiders instead of Rampage at the meeting. Bendis swerved us when he revealed this guy to be a Skrull in Secret Invasion#7 (December, 2008) and everything was fine...for now.

The year was 2017, the Secret Wars were history and the Marvel Universe had undergone a very soft reboot (so soft most people at Marvel claim there was no reboot). A few things were different, but nothing too noticeable. If you squinted everything was still the same and for Bendis this meant to once again use his "No Research Needed" list of villains to bring back Hood's army. Characters like Rampage and Constrictor, who were not available the last time around, were now fair play and by the power bestowed to him by the editors at Marvel he was going to use them even if it made no sense at all. Nobody stopped him and Rampage (Stuart Clarke) turned up alive again as part of Hood's army alongside Jigsaw, the man who brutally murdered him in Punisher: In the Blood#4 (April, 2011) a few years ago. Was this the triumphant return of a Recession Raider, a totally new guy in the armor or actually Stuart Clarke? We will never know!
--Markus Raymond

FYI this profile is pretty lazy, but there is not much to talk about the invididual members and the only reason I did it was to clear up the screwed up situation with the Recession Raider in New Avengers I#35 and Secret Invasion.
--Markus Raymond

CLARIFICATIONS:
The Recession Raiders has no known connections to: