Characteristics: The "Metal Men" were metal of construction, about 6' 4" tall, and were possibly steam-powered due to their reliance on water. The self-aware human-like robots existed on the moon for many centuries and had various devices at their disposal, including a ray, the Water Attractor, that could channel water from Earth to their base on the moon, plus the Memory Destroyer to selectively eliminate a human's memories.

(Blonde Phantom I#21/4 (fb) - BTS) - "Centuries" ago, the original inhabitants of a city on the moon created the so-called Metal Men, but the race of Moon-Men died out, leaving the robots behind. However, they continued to exist but relied on water to continue and would steal water from the Earth through a longer geyser using a ray device on a monthly basis to fill up their reservoir. They observed Earth and learned the languages of the planet.

(Blonde Phantom I#21/4) - One of the Metal Men's raids of Earth's seas inadvertently captured Namor and they helped him out of their reservoir. They explained the situation and showed him around their environment, which seemed to have sufficient oxygen for Namor to survive. When he said he would relate their existence back on Earth, one of the Metal Men was concerned that Earthlings would interfere by conquering them or demanding payment, so the Metal Man clubbed Namor and he fell unconscious. Not wishing to kill him, they took him to their Memory Destroyer device to wipe Namor's memory of them before sending him back to Earth by reversing their ray machine, sacrificing some of their water to do so. They then watched Namor back in the ocean comment on an uneventful evening and were satisfied that they could be left in peace.

"The Metal Men of the Moon" is the name of the story and they do not directly call themselves that.

The "original Moon-Men"? Could these Metal Men have been created eons ago by the Kree when they had a city on Earth's moon? Perhaps they were all later crushed when Attilan landed (@ Fantastic Four I#240). However, it's not confirmed at all that this was in the Blue Area of the Moon. There were very few buildings shown and so it contrasts with later grander images of the Kree city, so it's only speculation. There were a couple of small pointy mountain peaks in the Namor story colored in pastel blue...

Electro the Marvel of the Age fought a Moon alien named Gnorr and his Moon Robots in Marvel Mystery Comics#13 (November, 1940), which could mean that Electro might have been to the Blue Area or Blue City first. Could there be a connection between the Moon Robots and the "Metal Men"?
--Gammatotem

The "Metal Men" have a slight resemblance to the Kree Mandroids... perhaps they are an earlier model?
--John Kaminski

The "Metal Men" that dwelled on the moon could also have been created by the S'raphh, and have encountered Namor between the race's collective suicide and their unconsciousness forming Null the Living Darkness. If so, then Null presumably destroyed the "Metal Men" as part of his battle against all creation prior to leaving for Earth.
--adam craik

The name Metal Men was used only in the title of the story; they referred to themselves as robots.
Probably the Memory Destroyer slightly damaged Namor's brain, and years later increased his amnesia until the Human Torch/Johnny Storm reawakened him.
--Spidermay

I've lost count of the number of times that Namor's had his memory wiped.

Thanks to Grand Comics Database Project for identifying the credits. They suggest that Al Bellman may have been the penciler.

CLARIFICATIONS:
The Metal Men of the Moon has no known connections to:

The Memory Destroyer, which was a helmet-like device, was used by the Metal Men to wipe Namor's memories of his encounter with them on the moon. 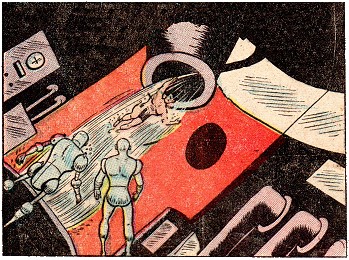 The water attractor was a powerful device generating a ray that created a vortex. The vortex enveloped great amounts of water, taken from the sea, and water path had such a strength that even Namor the Sub-Mariner could not swim out from it.
The water was dragged out of the atmosphere to the Moon, at great (but unrevealed) speed, filling a cylindrical container.

The Attractor could also function in the opposite way.