Powers/Abilities: Short in stature, Cheshire Car could turn invisible and demonstrated the ability to become intangible as well. His wide smile and spectacles were the last things to appear. He could also teleport, his arrival hidden by his invisibility.

(Luke Cage, Power Man#38 (fb) - BTS) - Big Brother had Cheshire Cat come over from Los Angeles to aid him against a rival crimelord called the Baron.

(Luke Cage, Power Man#38) - Cheshire Cat kept quietly following Cage, informing Big Brother that he had survived his bout with Chemistro (Arch Morton), but was himself being watched the Baron's henchman, Checkpoint Charlie.

Later, Power Man stormed Big Brother's hideout, smashing through to the room where Big Brother and the grinning Cheshire Cat were. 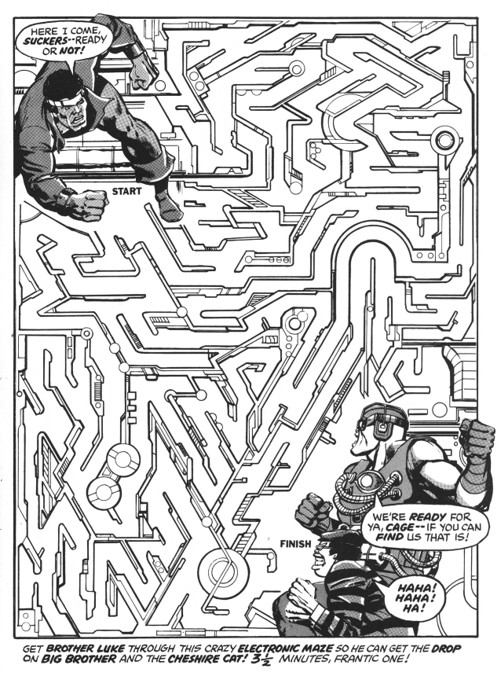 (Stan Lee presents An Hours Of Fun Book - Marvel Mazes To Drive You Mad!) - Big Brother and Cheshire Cat hid in an electronic maze from Luke Cage, who made his way through the maze to get a drop on them.

(Shadowland: Power Man#2) - Deadly Nightshade, leader of the Rivals gang, organized a group called the Flashmob, comprised of former opponents of Luke Cage, specifically Cheshire Cat, Chemistro, Spear, Commanche and Cockroach Hamilton, as well as the new Mr. Fish, to tackle the new Power Man (Victor Alvarez), and they soon challenged him on a rooftop. Cheshire dispersed before Power Man could land a punch, then reappeared, but was knocked out by the newly arrived Iron Fist.

(Shadowland: Power Man#2 (fb) - BTS) - Cheshire Cat was taken into custody on Riker's Island. Later, Deadly Nightshade's solicitor, Mr. Donovan, reported to her that he had been unable to secure Cheshire Cat's release.

(Spider-Island: Heroes for Hire#1) - Alongside Cottonmouth, Cheshire Cat and the Flashmob tried to leave spider-infested Manhattan via a bridge, but were stopped in a furious battle with Misty Knight and her Heroes for Hire (Black Cat, Falcon, Gargoyle, Paladin, Silver Sable).

I'm guessing he's a mutate. That he could seemingly vanish leaving only the dark stripes of his outfit showing before disappearing completely suggests that his costume may have initially been composed of unstable molecules.

Thanks to Skippy for pointing out his appearance in the Marvel Mazes book.

CLARIFICATIONS :
Cheshire Cat has no known connections to: