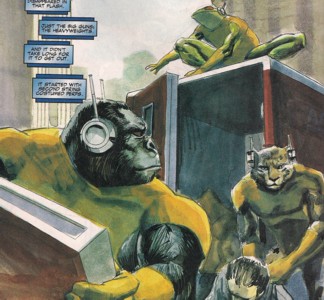 History: (Code of Honor#3) - While many heroes were snatched from Earth by the Beyonder, three criminals somehow got their hands on the equipment of the deceased Ani-Men and used it to rob a vault wagon only to be opposed by the NYPD.

(Civil War: War Crimes#1) - A new set of Ani-Men were among the many criminals contacted by Hammerhead in an effort to take over the underworld while the Kingpin was incarcerated. Unbeknownst to them, Kingpin had tricked Iron Man into leading a SHIELD unit to the warehouse where they were meeting, with Iron Man believing it to be the headquarters of Captain America's "Secret Avengers." Iron Man and the SHIELD unit busted in, and a huge fight broke out. The battle resulted in arrests, injuries and death, but it is unrevealed if any of those applied to the new Ani-Men.

I didn't see a Frog-Man, but that doesn't mean he wasn't around either.


The Secret Wars/Code of Honor Ani-Men (see clarifications). I don't see any reason they couldn't be the same guys (at least Ape-Man and Cat-Man) as the ones from Civil War. Until they make it official though....
--Madison Carter

The above assumption became a fact when it was revealed in Iron Manual Mark 3's Ani-Men profile.
--Markus Raymond

CLARIFICATIONS:
The Ani-Men are successors of

But have no known connections to

After Iron Man and the SHIELD agents arrived, Ape-Man tossed a few of them around.