Base of Operations: New York City

Powers/Abilities: Lois possesses the normal human strength level of a woman of her size, height and build who engages in extensive regular activities. She has no superhuman powers, but she is probably a top-notch newspaper and television reporter.

History: Very little is known about Lois except that she appears to be a newspaper reporter and TV correspondent for one of the newspaper tabloids publishing in the area of New York City of which there are several. She was usually sent out on assignments with a co-worker named Clark who seems to be fascinated by the superhero population around Manhattan, a trait that frequently irks Lois.

(X-Men I#98) - While in Manhattan, Lois walks by as Clark noticed the X-Men in public.

(Marvels#4) - Around the time of the first public appearance of Solarr, as well as Thundra's challenging Ben Grimm to a duel in Shea Stadium, Lois, Clark and their friend Jimmy attended a party with famed photojournalist Phil Sheldon.

(Uncanny X-Men I#141) - Lois was sent on assignment to a press conference in Washington D.C. as Senator Robert Kelly decided to speak out to the United States Senate on the growing mutant hysteria. Mystique leading her own version of the Brotherhood of Evil Mutants burst into the senate room to assassinate Kelly in order to teach humanity to fear mutants. Lois just barely got out alive while members of the X-Men appeared to protect Kelly.

(Marvel Team-Up I#110) - Lois attended a press report at Stark International in Long Island where Tony Stark revealed his Long Range Sonic Strata Scanner for detecting tremors when underground quakes shook the equipment off its base and rattled the whole building. The quakes were created by the eco-terrorist Magma with intentions of stealing it.

(Thor I#341) - While attending a press conference, Lois and Clark were surprised by Colonel Nick Fury of S.H.I.E.L.D. testing to see if they can recognize Thor, looking for a new mortal identity, in civilian clothes and glasses. Lois didn't seem to pay enough attention, but Clark recognized Thor and passed off on the similarity.

(Venom: Seed of Darkness Flashback#-1) - Clark and Lois visited the Daily Globe offices, with Clark commenting to his companion how disorganized and frantic it seemed in comparison to their workplace.

(Uncanny X-Men Annual I#10) - At New York City's Delacorte Theatre, Lois and Clark attended the New York Shakespeare Festival's summer production of "A Comedy of Errors." The extra-dimensional Mojo took the theatre hostage for the New Mutants to battle the brainwashed X-Men for his violence-obsessed movie industry and interrupting the play in the process. Wolverine, Psylocke and Rogue overcame their programming to defeat Mojo and save Clark and the spectators present.

(Excalibur I#8) - Covering a news story in Manhattan, Clark noticed Captain Britain flying overhead in his search for missing Excalibur member Meggan and pointed him out to Lois. She remained unimpressed.

(Uncanny X-Men I#245) - In the newsroom of the great metropolitan television network where she worked, Lois was on the scene as a cub reporter burst in with reports of an extra-terrestrial invasion in Australia. Her boss nixed the tabloid story in order to cover the inauguration of a new President of the United States.

(Web of Spider-Man I#75 - BTS) - After realizing their feelings for each other, Lois and Clark decided to get married. They spent their honeymoon in Manhattan.

(Web of Spider-Man I#75) - While in Manhattan, Lois and Clark were trapped in a freak snowstorm whipped up by Bora of the Avant Guard. Namorita and Nova of the New Warriors rescued them from the effects of the freak snowstorm and brought them to safety. 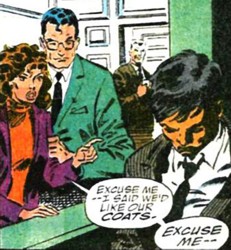 (Daredevil I#292) - Leaving a NYC restaurant, Lois and Clark attempted to collect their coats from the coat check desk, unaware the man whose attention they were trying to get had moments earlier been murdered by Tombstone.

(Thor I#476) - Lois and Clark shared a copy of the Wall Street Journal at the corporate offices of Brighton and Associates, located in the former medical offices of Doctor Donald Blake.

(Ghost Rider III#66) - While staying in a hotel on the posh east side of Manhattan, Lois and Clark were having a romantic balcony dinner when Blackout crashed near them from an upper story apartment while being pursued by the Ghost Rider. Clark leaped to Lois's defense, but Blackout seized Clark and threatened to kill him. The Ghost Rider briefly reverted to Daniel Ketch to save Clark but transformed back to capture Blackout. Lois looked to Clark for solace as Ghost Rider carried away Blackout.

(Daredevil I#353) - While looking for a story in the Manhattan Municipal Courthouse, Lois witnessed Matt Murdock returning to the courtroom after a long absence from practicing law as his law partner, Franklin "Foggy" Nelson was trying a case. She called her boss and reported that it was a story worth out-scooping the Daily Bugle.

(Marvel Knights Spider-Man#6) - Lois, Clark and Jimmy watched Peter Parker (sans costume because he had been kidnapped from hospital by the Vulture/Adrian Toomes) crawling up a window at their offices.

Lois seems to be the Marvel Universe/Earth-616 counterpart to Lois Lane, the well-known intrepid investigative reporter who is native to the DC Universe even if her last name has yet to be confirmed (Tony Stark mentions it in Marvel Two-in-One#110.

It's also worth a mention that Terri Kidder, a reporter from the Daily Bugle, seems to be homage to her since her name appears to be based on two actresses, Teri Hatcher and Margot Kidder, who have portrayed her. (Perhaps a Phyllis Coates/Noel Neil character is not that far off?).

The hair of Earth-616 Lois seems to alternate at times between brown and black. This is because the classic DC Universe Lois always had black hair (as did her actress counterparts) up until her 1990s revamp in DC's Man of Steel#1 following the details of the Crisis of Infinite Earths. The Earth-616 Lois, however, probably just repeatedly dyes and changes her hair as often as the Wasp changes costumes.

There seems to be a bit of confusion as to where Lois and her associate Clark actually work. The building, which has a huge planet atop it with a few visible letters, was partially seen in Uncanny X-Men #245, but it may or may not be located in New York City considering the fact that in several of their appearances, they are almost consistently visitors to New York. This fact seems to be confused by the revelation that at least one of their corporate offices, marked as Brighton and Associates, is located in the office space where Donald Blake once kept his medical practice and that has always been in New York City. Perhaps, their news offices are located in a borough of New York and they randomly enter Manhattan or they just recently attained the former offices of Donald Blake as a new building. Possibly, Brighton and Associates is the firm financing the news agency of Lois and Clark (WillU: I miss that show!).

Lois's credited appearances in Uncanny X-Men#245 and X-Men Annual#10 are very hard to find, but are listed here in order to be as complete as possible. Her appearances in "Superman vs. The Amazing Spiderman" and "Superman And Spiderman" are purposely ignored because it is likely they exist in a parallel Marvel-DC Earth ("Earth-MDC" or Earth-Crossover) which possibly exists somewhere in the Marvel Multiverse since it would have ceased to exist after DC's Crisis. Its existence seems to have been confirmed by glimpses in What If I#1 and Avengers Forever#7.  Of course, it might be interesting if at least once in Marvel vs. DC or Avengers vs. The Justice League of America if DC's Lois and Clark encountered their Marvel Universe counterparts. ("Clark, is that us? What the heck is going on around here?")

One thing that is interesting to point out is that the Marvel writers periodically like suggesting that the characters of the Distinguished Competition (or at least some semblance of them) exist in the Earth-616/Marvel Universe, while the illustrious competition is not.

Besides Lois and Clark, other DC denizens with counterparts in the Marvel Universe include Jimmy Olsen and Perry "The Chief" White (X-Men I#245) and Lex Luthor and Ra's Al Ghul in connection with the Machiavelli Clan (Spiderman: Gathering of the Sinister Six).

Hey, just saw the Lois profile you did for the Appendix, and I'd thought I'd add a little tidbit. Uncanny X-Men#245 is a small jab at DC's crossover known as Invasion! which had wrapped up scant months before in January. One of the major plot points was a coalition of aliens attacking Earth establishing a beachhead in Australia.

Also, before it was abandoned in July, Hypertime was still a legitimate way of explaining various cross-overs for the DC Universe. Basically, the crossover between DC and Marvel occured in a tributary of Hypertime; it happened, but only in that branch. Sometimes the tributaries merge back into the main line, sometimes they branch out again. It's been suggested that the Marvel and DC universes are actually two main Hypertime streams, with the tributaries sometimes mixing. In any case, it's all moot, as Hypertime is no longer used in DC. Infinite Crisis may well rewrite how the DC Universe is viewed once again.
Oh, and DC sprinkles Marvel characters into their comics. It's just, they're usually the superheroic type, not the civilian nods which Marvel uses. That, and they're less than flattering, as seen by the most recent Superman/Batman storyline, using very thinly disguised Ultimate Avengers.
--Jacob Cundiff

BIG THANKS to artist James Fry for pointing out the missed Venom: Seed of Darkness appearance.

Profile by: Will U

CLARIFICATIONS: Lois is not to be confused with:

Jimmy (Olsen) is not to be confused with:

The Chief is not to be confused with:

Jimmy Olsen seems to be a cub reporter that follows Lois and Clark around on assignments. He attended with them a party for famed journalist Phil Sheldon and later in the TV newsroom where he works he burst in with reports of an extra-terrestrial invasion in Australia. His boss, however, nixed the tabloid story in order to cover the inauguration of a new President of the United States. He later took a job photographing Spider-Man for a charity event interrupted by Styx and Stone. Jimmy also seems to have a friendly rivalry with fellow photojournalist Peter Parker who joined him to photograph the current new Baxter Building, home of the Fantastic Four.

"The Chief" is Lois' boss at the great metropolitan television network at which she works. He has a name, which has never been used, and doesn't like being called Chief, but he does like cigars. He nixed Jimmy's story on an invasion by extra-terrestrials in Australia to cover the inauguration of the President of the United States.