Affiliations: (civilian identity only) associate of the NYPD

Base of Operations: New York City

Powers/Abilities: Utilising technology stolen from the Vulture, Bluebird can fly using a magnetic pack. She steers by way of large wings attached to her back and wrists. Additionally she also has an ultrasonic device, seemingly of her own devising, which allows her to emit a warbling cry which can overwhelm the senses and cause unconsciousness in those who hear it.

History: (2/3, Spider-Man Annual 1982 - BTS) - Police criminologist Zora Loftus used her job to learn the secret of the Vulture's flying abilities. Armed with this and an ultrasonic device, she created the identity of Bluebird, a flying thief. Bluebird began a series of high profile robberies in Manhattan. She got away with over a hundred thousand dollars of cash and valuable during three raids over the space of three consecutive nights. The crimes are carried out so swiftly that witnesses could not even be sure whether Bluebird was male or female. 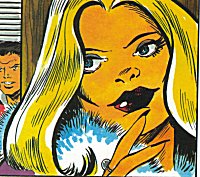 2/3, Spider-Man Annual 1982) - Zora Loftus appeared chat show "People's Talking", where she harangued Spider-Man for not having done anything to stop Bluebird's crime wave. She suggested to host Charlie Gladhand that the two superhumans might be collaborating, or that Spider-Man might be a criminal who had only previously stopped other criminals when they had got in the way of his own plans.

That night, while the pre-recorded show aired, Zora put on the Bluebird costume again. Since very few people knew the show was taped in the afternoon, rather than going out live, she hoped to use its airing as a partial alibi, helping to deflect people's suspicions away from herself. She had succeeded in making a good haul when she encountered Spider-Man, who caught her legs in a webline. She carried him aloft with her, but it soon became apparent that her flying device could not lift two people at once, and she began to lose height. With the wall-crawler doggedly hanging on to the web attached to her legs, she deliberately and suddenly plummeted thirty feet, smashing her passenger into the rooftops of the city, then made a smoother landing for herself. Before he could fully recover, she employed her sonic wail, knocking him out. 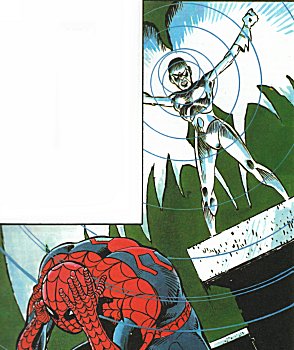 At midday the next day Zora went to the Daily Bugle offices, where she met with J.Jonah Jameson. The newspaperman praised her for publicly expressing anti-Spider-Man opinions, and introduced her to Peter Parker. She mentioned she could not stay too much later, as she had to leave to record another spot for "People's Talking,", adding that her appearance the night before had been a hit: her phone had not stopped ringing all morning, "and after the Bluebird left Spider-Man lying on a roof-top last night, they want me back again..."

(2/3, Spider-Man Annual 1982) - At nine o'clock that night, Bluebird stepped out of the window of Zora's apartment on 23rd Street. Spider-Man was waiting for her, sitting on a window-ledge across the street, and immediately fired webbing at her. She dodged this, but when she tried to fly off, she realized he had already sealed off both ends of the block and the air above with nets of webbing. Unable to flee, she tried using her sonic attack again; this time however, Spider-Man seemed to be immune to it. Panicing, Bluebird darted for an alley between the buildings which seemed to be clear of obstruction. This wasn't the case though, and Bluebird ran into another web, carefully hidden in the shadows. An unhurried wall-crawler caught up to find her completely entangled, and when she tried to scream, he gagged her with yet more webbing, then unmasked her. Spider-Man took a few pictures for proof, then delivered her to the nearest police station.

Comments:  Created by ?? Sadly the U.K. annuals don't include credits for writers, artists or anyone else for that matter. Like most U.K. Annuals, it would have been released a few months before the end of the year, in time to be bought for Christmas. Typically annuals which had the year printed on their cover were actually released the year before, so that children receiving them as presents on Christmas Day would not think they were getting an out-of-date product. However Spider-Man annuals of the late seventies / early eighties didn't carry a date on the cover, and the date given in the copyright section of the indicia is now generally used for the year distinguisher. 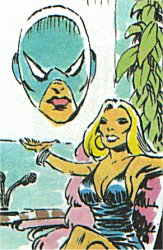 Bluebird appeared in the first text story (Blight of the Bluebird) given in the Annual, following after the first half of a reprint of Spectacular Spider-Man Annual#2. As such, she remains on the fringe of the Marvel universe, and much like characters from the various novels, her existence on Earth-616 is unconfirmed, unless and until she makes a definite appearance in another story. However there is also nothing at all that rules out this story being added to the Spider-Man canon either.

The reason Spider-Man didn't try to stop Bluebird until the fourth night of robberies is because Peter Parker was out of town, covering an art exhibition in Chicago for the Daily Bugle.

To the left is Zora Loftus, ironically pictured below her criminal alter-ego while appearing on the "People's Talking" show.  What I want to know, and trying not to sound sexist, is how could the witnesses to Bluebird's crimes be unsure as to the gender of the thief? Take one look at Zora in that dress and you'll see what I mean. For the record, the other guest who is mentioned as appearing on the "People's Talking" chat show alongside Zora was Ben Grimm, the Thing.

Spider-Man divined who Bluebird really was when Zora mentioned his defeat at the hands of Bluebird the night before - something only he and the criminal could know of. Once he knew who she was, he looked up her address in the phone book, and that night was able to be ready for her when she set out to start her night's thievery, blocking off her escape routes and plugging up his ears with webbing so her sonic attack wouldn't work.

Given Adrian Toomes negative reaction to others who have stolen his flight technology in the past, it's highly likely he would take an equally dim view of Bluebird's brief career. Hence I've listed him as an enemy of hers, although to the best of my knowledge, they've never been seen to meet. Profile by Loki

CLARIFICATIONS: Not to be confused with