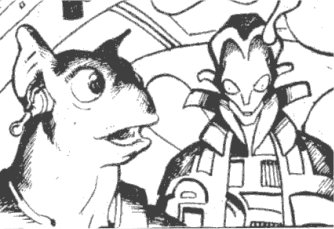 Location/Base of Operations: Unknown - the only example of the species we have seen were on a quest to find other life forms, and thus not in their natural habitat.

Powers/Abilities: The Brain-Carriers were presumably extremely intelligent; at least some of the Physiques were very strong (though not on a par with Captain Britain/Brian Braddock). However the Brain-Carriers were completely helpless on a physical level without access to their Physiques, while the Physiques were completely mindless and directionless without the control of their Brain-Carriers. The Brain-Carriers could control their other halves telepathically over an unspecified distance, but it was strongly implied this range was limited, and their control could be disrupted by inflicting pain, messing up their concentration.

The Binary Beings were technologically advanced enough to create robotic servitors and design a ship which could traverse hyperspace.

Traits: As a split species, with each being composed of two, distinct but linked bodies, the Binary Beings were limited in their thinking by their pre-conception that all other beings had to fall into the same category of binary gestalts. Thus their servitor robots which they employed in battle were vulnerable because they followed the same design - a frail and easily destroyed Brain-Carrier which controlled a robust Physique robot which was directionless if anything happened to its controller. As a species, the Binary Beings appeared to be warlike, as they created a hyperspace craft with the sole intention to seek out new life and then enslave it. Physically, no two members of the species seemed to share any obvious traits, other than being bipedal humanoids - it might have been that each member of the species' body shape was specialised to the tasks they carried out.

History: (MSH II#385/1 - BTS) - The Binary Beings created a hyperspace vessel and sent it off on a mission to seek out and enslave any new lifeforms it encountered. Prior to this, their race had never encountered another, and for an unspecified time, their hunt proved unsuccessful.

(MSH II#385/1) - Long range detectors on board the vessel detected a pair of beings apparently travelling through the vacuum outside without the aid of a ship. Assuming the pair (Captain Britain and his companion Jackdaw) to be a binary being in the same manner as themselves, the Pilot teleported the two on board, separating them by sending the "Brain-Carrier" (Jackdaw) to Dissection and the "physical counterpart" (Captain Britain) to Interrogation. The Interrogator tried to question Captain Britain while Jackdaw was tortured in the other section of the ship, in order to establish how well Jackdaw could control his "Physique" over a distance and under duress. When Captain Britain responded to this treatment by becoming threatening, the Interrogator set his physical side on the hero; being able to think for himself and not having to wait for telepathic instructions, Captain Britain easily outmaneuvered his opponent, knocked it out, then threatened the Interrogator Brain-Carrier with a stolen weapon. It swiftly led him to where Jackdaw was being held, and with a choke hold on the Interrogator Brain-Carrier and his gun on the parrot-faced torturer, Captain Britain soon freed his companion.

The Binary Beings sent their robots in to battle the two interlopers as they fled through the ship, but again the individual minds proved more than a match for their slow, dual-bodied opponents. In another section of the ship Greigar Forr and the Pilot watched the battle on a monitor, and as their robots were devastated, the two Binary Beings came to the realization that their kidnapees had a mind each. Realising their forces were no match for the aliens, the watchers agreed to transmit the human and elf back into the void. The transport was initiated at the same instant as Jackdaw attempted to use his own powers to transport Captain Britain and himself to safety, causing time and space to fold in on itself. While the hero and his companion were returned to the instant before they had been kidnapped, their memories of the encounter wiped, the Binary Beings and their ship were frozen in a single instant. They no longer existed, nor had they ever existed; they were locked forever in one moment of existence, frozen in time.

No known connection to 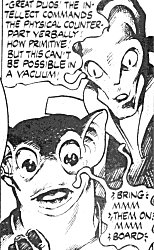 The Pilot was the first being to see Captain Britain and Jackdaw on the ship's scanners. It ordered the collection of the pair from hyperspace. Its Brain-Carrier component also appeared to be the one who discussed the robot/hero firefight, and reach the decision with Greigar Forr to return their escaped captives to the void (although this isn't certain, as we only see the being discussing things with Greigar Forr from behind). The Pilot's physical form had extremely large eyes and ears, perhaps because its role required heightened senses. 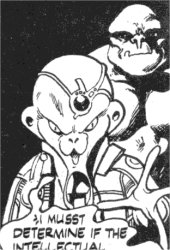 The Interrogator's physical side was noticeably larger and more formidable than the other Physiques seen, possibly because it was sometimes required to use force on captives. 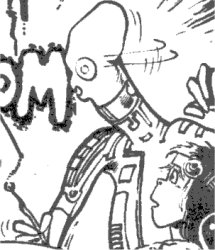 Nicknamed both "Parrot-face" and "Egg Head" by Captain Britain, only one half of Jackdaw's torturer was seen. While its physical weakness might indicate that the component the heroes encountered was the Brain-Carrier, I think Parrot-face's lack of dialogue and the fact that it was actually handling the torture instruments means it was probably the physical half.

Seen only briefly, and the only Binary Being to be named. Its Brain-Carrier was seen having an "intellectual discussion" with another Binary Being (the Pilot I believe) as they watched a monitor displaying Captain Britain and Jackdaw's rampage through their ship. They made the joint decision to return the pair to the void. 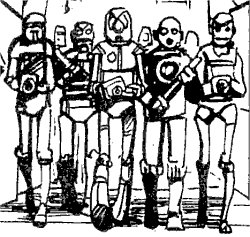 Designed in Binary form like their creators, the ship's robots were sent in to deal with the escaped captives. Like their masters, they proved no match to beings who each had their own minds.

Non-Marvel Copyright info
All other characters mentioned or pictured are ™  and © 1941-2099 Marvel Characters, Inc. All Rights Reserved. If you like this stuff, you should check out the real thing!
Please visit The Marvel Official Site at: http://www.marvel.com/