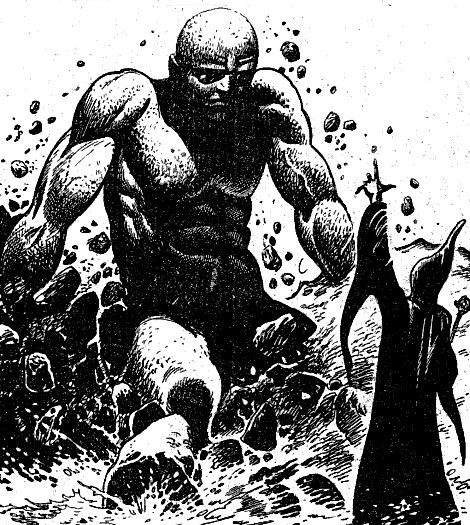 Known Relatives: None - but he bears a strong resemblance to the stone giants who turned up in #58 and #59 of the same title, so there may be some relationship.

History: (Hulk Comic#4/2 (fb) - BTS) In prehistoric times ancient wizards imprisoned a giant man, made of (or covered by) stone, within a large outcrop of rocks on what will one day be the Cornish coast. He would be remembered simply as "the Ancient One".

(Hulk Comic#4/2) Modred the wizard released the Ancient One from his prison and charged him with finding and killing the Black Knight.

(Hulk Comic#5/2) The giant discovered the hero conversing with Captain Britain inside a cave near the sea. Smashing at the rockface, it caused the roof to begin to collapse. Before they could be trapped, the Black Knight essayed forth upon his winged steed, Valinor, to face his foe in battle. Dodging behind his opponent, the Knight's Ebony Blade cut deep into the creature's fossilised thigh, but the hero could not evade the giant's counterattack, which knocked him out of his saddle. Dragged along by the stirrups, the Knight was separated from his weapon. The goliath moves to end him before he could reclaim the sword, but was tripped up by a shining staff thrown by Captain Britain, as the second hero joined the fray. The Captain reached his ally's weapon seconds before the grasping arm of the Ancient One could claim it, and passed it back to the Knight, who had used the respite to remount. Then the patriotic hero delivered a powerful blow to the rockman's face, but only served to injure his own fist. As the Ancient One loomed forward, the Captain jumped on to Valinor's back behind the Black Knight, and the heroes fled with the giant in close pursuit. 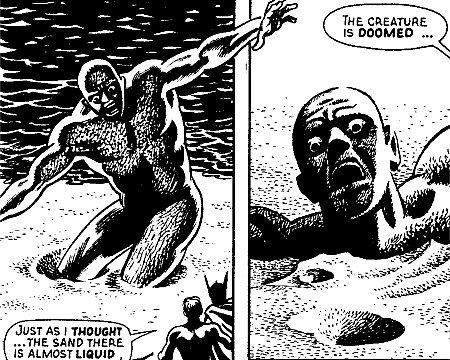 At Captain Britain's command, the Knight encouraged his horse to make a prodigious leap, clearing a patch of quicksand on the beach to land on the stone beyond. The Ancient One was not so lucky, and found to its distress that the sand could not support its weight. A victim of its own immense size, the giant was sucked below the surface, seemingly forever.

The Ancient One, and the stone it emerged from, bear a strong resemblance to the megalith-encased giants who are later seen to guard King Arthur's resting place. It doesn't seem too much of a stretch to suggest they may well be similar beings to the Ancient One. If this is the case, then the Ancient One may well have contained a living man encased inside the stony surface, and might also have possessed mental powers similar to those guardians (although none were demonstrated in the brief time we saw him).

Given his stonelike appearance, and his lenghty prior imprisonment, it is entirely possible that the Ancient One doesn't need to breathe. In which case, he would have been able to eventually dig himself out. Maybe we'll see him again one day!

CLARIFICATIONS: No known connection to and not to be confused with