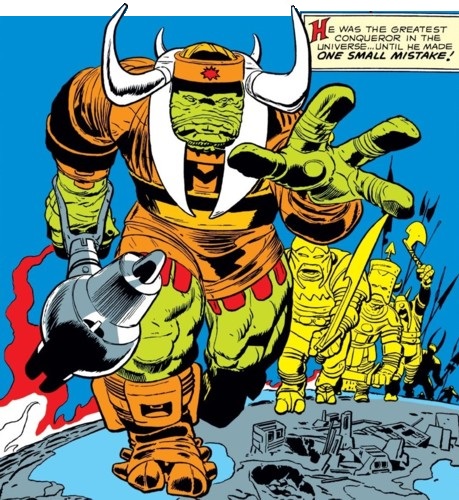 Affiliations: The people of Krangro

Base of Operations: Krangro in the Milky Way Galaxy

Powers/Abilities: The Creature from Krangro wore a suit of combat armor, wielded sophisticated firearms, including stun rays, and commanded powerful starships capable of traveling past the speed of light. He used an atomic power hammer as his main weapon.

History:
(Tales of Suspense I#30/2) - The Creature from Krangro was one of the greatest warriors in all of Krangro, and led his armies to countless victories over other worlds. Following a successful raid, he met with his people's king on Krangro, and was informed that he had not invaded the planet Earth, which had been one of the worlds he was sent to conquer. The Creature from Krangro claimed to have overlooked it, but the king, concerned that the commander might be a coward, demanded that he journey to Earth and take 3 people as slaves.

The Creature from Krangro led a team to Earth, and stunned the first three people they saw, then brought them back to Krangro. Before his king, the commander attempted to break their spirits and make them submit to him, but the Earthmen did not react at all. The king became furious, and ordered the commander's death. Having decided that the people of Earth were too strong-willed, the king declared that the Earth would never be invaded. What none of them realized was that the "Earthmen" they had kidnapped were actually stone statues of Abraham Lincoln, Theodore Roosevelt and George Washington.

So, it would seem that they never invented statues on Krangro...

CLARIFICATIONS:
The Creature from Krangro should not be confused with: