Aliases: Ehecatl (the god of wind)

Base of Operations: Topán, the Floating World

Powers/Abilities:
Quetzalcoatl possesses the conventional powers of the Mexican Gods.  He has superhuman strength (Class 50 perhaps) and endurance plus mystical abilities enabling him to fly and command ambient elemental energies, such as having control over the air and wind.  He can also teleport under certain conditions.

Returning to take control, Tezcatlipoca impersonated a god named Titlacauepan in order to shame Quetzalcoatl into getting drunk enough to rape his sister, Quetzalpetlatl.  He then showed Quetzalcoatl's true image as a feathered serpent in his "smoking mirror" and shamed him into fleeing Teotihuacan.  Promising to return, Quetzalcoatl went into exile with the Mayan Gods in the underworld.  In his final act of revenge to undo the good Quetzalcoatl had created, Tezcatlipoca took mortal form and convinced the Aztecs to accept the Spanish Conquistador Hernando Cortez as the returning Quetzalcoatl (See Comments regarding this).  The Aztecs belief that Cortez was their returning god made it that much more easier for the Spanish Conquistadors to conquer the Aztecs.

(Thor Annual#10) - Quetzalcoatl was sent to aid Thor and many other gods against the menace of Demogorge the God Eater, who had been raised from the dawn of time by Ahpuch and the death-gods of other pantheons.  Unable to affect the entity in battle, he was consumed with the death-gods as well as his allies but was freed when Thor caused a shift in the creature's palate. Becoming Atum once more, his true being, Demogorge released Quetzalcoatl as well as all of the other swallowed immortals.

(Marvel Universe: The End#5) - Alongside various Earth heroes, Abstractions, and other gods, Quetzalcoatl was summoned by the Living Tribunal to oppose the mad Titan Thanos, who had usurped true omnipotence in the Marvel Universe. 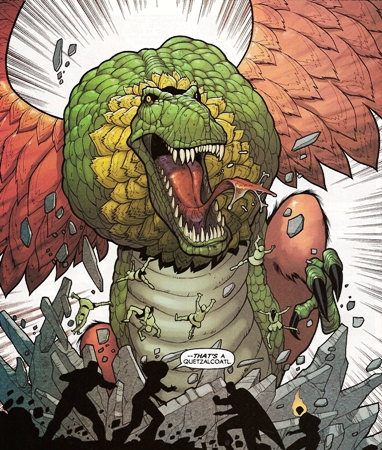 (Last Defenders#1) - The Sons of the Serpent summoned him in his feathered serpent form in Atlanta. Confused Quetzalcoatl attacked the heroes and civilians at Trump Plaza. Due to his summoning spell not being finished, the monster was out of control. The Defenders (Blazing Skull, Colossus, Nighthawk, She-Hulk) struggled to contain it.

(Last Defenders#2 (fb)) - As the monster attacked the buildings, causing high collateral damage, She-Hulk tossed Blazing Skull at it, but Quetzalcoatl put his flames out by batting his wings. The monster then blew fire at Colossus before She-Hulk knocked it into another building, then Blazing Skull defeated it with a fiery blast between the eyes.

(Incredible Hercules#116-117) - Quetzalcoatl was in attendance a the Council of Godheads was gathered by Athena to discuss the menace of the Skrulls.
Itzamna, along with Hunab Ku, Tezcatlipoca, Inti, and Quetzacoatl, volunteered Ajak the Eternal to fight for them.

(Secret Warriors#10) - Quetzalcoatl was present when Phobos (Alexander Aaron), son of Ares, was found worthy by the Council of Godheads to be a god.

The Aztecs Gods and the Mayan Gods are considered to be the same race, and are titled under the Mexican Gods.  They are, however, distinct from the Incan Gods.

In the myth section of Quetzalcoatl's history, it is stated that a vengeful Tezcatlipoca "convinced the Aztecs to accept the Spanish Conquistador Hernando Cortez as the returning Quetzalcoatl."  This, of course, does not come from any historical documentation or scholarly reference; it is merely another of Will's wild suppositions.  Although an imaginative concept, in reality no divine intervention instigated what would become a systematic slaughter of millions of American Natives by European invaders.  Instead, the Aztec people made a grave mistake by believing that Cortez was Quetzalcoatl returned, which, as the myth history illustrates, was supposed to occur at some point.--Kyle

Gaea admitted in Thor I#301 that she had been Coatlique as well as Jord to the Asgardians and Aditi to the Hindus.  This makes Quetzalcoatl siblings with Thor (of the Scandinavian/Norse Gods), the Titans (of the Greco-Roman pantheon), and the Adityas (ancestors of the Hindu Gods).

In Aztec Myth, Quetzalcoatl was often referred to as The Feathered Serpent.  Makes me think he'd have an archaeopteryx as a pet.  Appropriately enough, there is a giant pteradactyl named for him. It is called Quetzalcoatlus.

Per Degaton  points out, "Young Allies Comics#20 has a story entitled, 'The Crown of Quetzalcoatl!'"

In What If II#38, Quetzalcoatl is garbed exactly like previous depictions of Tezcatlipoca and even recalling his encounter with Thor against Demogorge.  The only sense to be made of this is that Quetzalcoatl has replaced Tezcatlipoca in this reality.  (Or he really dug Tezcatlipoca's threads --Prime Ed-ternal)

Quetzalcoatl was mentioned and impersonated by 2 men (Crane was about to but Juan Lopez beat him to it) in order to control Quetzalcoatl's worshippers ["Someone in the Flames" World of Fantasy#7 (May/1957) 2nd story].
--Gammatotem

Profile by William Uchtman and Snood.

Other Gods and Eternals have been mistaken for Quetzalcoatl in the past, these include:

He should also not be confused with:

(What If II#38) - In an alternate reality, Tezcatlipoca was again usurped by Quetzalcoatl who even took his arraignments of leadership.  In this timeline, Quetzalcoatl, possibly representing Itzamna, met with the godheads to discuss Seth, who had conquered Asgard in this reality.