Occupation: Devourer of the dead

Base of Operations: Nastrond, Hel;
occasionally at the roots of Yggdrasil;
formerly Skrekklandet, Norway

Powers/Abilities: Nidhogg stood several stories high, and possessed wings enabling it to fly. It had powerful jaws with sharp teeth, claws on its appendages, and was a capable swimmer.

One of Nidhogg's various forms resembled a giant, grey insect of several hundred feet length with six short appendages and a wormlike, tentacled tail. In this form Nidhogg laid eggs.

History: (Norse/German Myth) - Nidhogg was a dragon who dwelled within Hel, where it feasted upon the dead. Nidhogg also nibbled upon the roots of Yggdrasil, always threatening to destroy it. Nidhogg often bickered with an eagle which lived at the top of Yggdrasil. Their gossip was spread by the squirrel Ratatosk.

Nidhogg was fated to survive the events of Ragnarok, to feast upon those slain during the events.

(Avengers: Endless Wartime#1 (fb) ) - <1944> Nidhogg bit a weakened root of Yggdrasil and escaped its prison. Making its way up the center of Yggdrasil Nidhogg arrived on Midgard digging his way through the Norwegian island Skrekklandet. Thor hunted Nidhogg down and found it laying eggs in the icy depths hole on Skrekklandet created by Nidhogg's arrival. Nidhogg defended its nest, but driven by rage Thor fought the monster, destroyed many of its eggs and seemingly slew Nidhogg with a lightning blast. Thor's attack also destroyed the Nazi base on the island and their prototype technology for artificially intelligent machines sunk down into the icy pit with Nidhogg where the monster got connected to the technology.

After World War II Sgt. Bob Herne and Johnny Lightfoot, who had witnessed the event while on a mission with Captain America, returned to Skrekklandet to search for the treasure in the pit and discovered the body of Nidhogg woven into the island and the monster's eggs. They founded the weapon business Hereward to profit from the wars to come by selling the munition bred on the island through Nidhogg, whose body got linked to the Nazi technology on the island. Their children continued the business. Eventually the island became the birthplace to living aerial drones (the Ice Harriers) and their grandchildren Alex Herne and Debra Lightfoot (apparently offspring of Nidhogg as well) turned Hereward into a worldwide military contractor. Nidhogg's body, connected to Nazi technology, remained trapped under the island for decades. (see comments)


(Thor I#339, 340 (fb) ) - After Balder descended into Hel, he witnessed Nidhogg devouring the dead, and was horror-stricken at the sight. 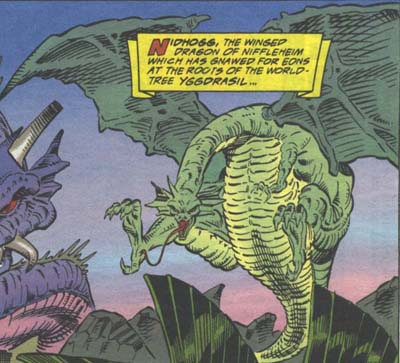 (Thor I#486) - Nidhogg was released from Hel by Kurse along with a score of other monsters to oppose Thor and Sif on Earth.

(Thor I#487) - When Nidhogg threatened a passing jet, Thor flew after it and struck it down with a blast of lightning, sending it back to Hel.

(Thor II#85) - Nidhogg's corpse was seen by Yggdrasil, as Asgard perished in Ragnarok.

(Journey into Mystery I#646) - Sleeping in Nastrond on a pile of bones Nidhogg was woken up by Sif, who tossed a skull at the dragon's head. She was surprised to see the dragon alive because last she heard Nidhogg had died at the roots of Yggdrasil. Nidhogg didn't care for her questions and only wanted to know what she had brought him to eat, but Sif sought information. Nidhogg crunched on some bones, then accidentally hit Sif while stretching. Nidhogg offered to aid Sif, who wanted to know the truth behind the story of the Berserkers. She scratched Nidhogg's neck, but lost her temper and threatened to stab the dragon's eye when Nidhogg wouldn't answer her. Nidhogg then revealed how Sif could find the Berserkers by following the Fimbulthul past the well Hvergelmir where she would find the teacher Aerndis. Nidhogg wished Sif a safe journey after promising her to wipe her skull clean after she was finally slain.

(Avengers: Endless Wartime#1 - BTS) - Hired by the United States Hereward utilized Ice Harriers in Slorenia to fight the Tabissara mercenary forces. The Ice Harriers' existence became public when the Tabissara shot one of them down. Captain America led the Avengers to investigate the mysterious drone when he heard that Hereward was based on Skrekklandet and Thor revealed that he had slain Nidhogg there in 1944 at the same time Captain America came there to deal with Nazis creating a Wunderwaffe. Hereward lost control over the Ice Harriers in Slorenia despite limiters installed to prevent the Ice Harriers from firing their weapons on-base. The Avengers took two down while Hereward took another one down with a remote detonator. A Hereward employee revealed that upgraded Ice Harriers without limiters where delivered to S.H.I.E.L.D. in New Jersey. Black Widow burnt the Ice Harriers and their eggs before the Avengers left for New Jersey.

The Avengers destroyed S.H.I.E.L.D.'s newly acquired Ice Harriers, who went mad as soon as Thor arrived. Wolverine assumed that the Nazi technology within the Ice Harriers was coded to go after Captain America while their physical parts inherited their ancestor's hatred for Thor. Bruce Banner joined the team on their mission to Skrekklandet where the team faced more offspring of Nidhogg, including the alleged grandchildren of Hereward's founders, and an army of human-sized and fully armed Ice Harriers. Iron Man hacked into the Ice Harriers' systems to shut the attacking Ice Harriers down.

(Avengers: Endless Wartime#1) - Hulk found Nidhogg's body at the bottom of the ice pit on Skrekklandet and slew the creature, realizing at the last moment it didn't want to live anymore anyway. (see comments)

(Thor IX#2 (fb) - BTS) - Nidhogg feasted on the shores of Nastrond on the flesh of oath-breakers.

Will U: In the myths, Jormungand is almost definitely equated with Nidhogg. Both creatures were cast from Asgard; both creatures nibbled at Yggdrasil and both creatures threatened Idunn's golden apples. In the German myth, however, Nidhogg survived Ragnarok to feed upon the corpses of the dead tossed to it; otherwise, they are sometimes treated as one and the same. In the Marvel Universe, they are treated as separate creatures.

Oh, 2013! A serpent and a dragon! One trapped since World War II on Earth and the other gorging its fat belly on the dead in Nastrond. And the trapped worm came after the fat one. How should these two beings be the same? Let us at least try to make sense of this and accept Brevoort's "continuity is a tool" and an editor's job is "not to maintain the continuity, it's to tell excellent and engaging stories that excite and involve the readers".

CLARIFICATIONS:
Nidhogg should not be confused with: