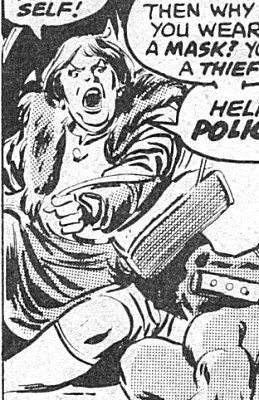 Affiliations: Brian Braddock (cleans for him)

Known Relatives: None (but as she is Mrs. Anderson, presumably she does / did have a husband at some point)

Base of Operations: London, England

Powers/Abilities: Highly opinionated - once she has an idea in her head, they are "less shakeable than Gibraltar".

History: (CB I#28/1 (fb) BTS)  Mrs. Anderson cleaned flats (apartments) for a living, including students such as Brian Braddock.

(CB I#28/1) Mrs.Anderson was walking in the street near Brian Braddock's flat when she was accosted by three thugs who attempted to snatch her purse, knocking her to the ground and stunning her during the assault. Unluckily for the thugs, the superhero Captain Britain witnessed the attack and came to her rescue, scaring the robbers off. He gently awoke Mrs.Anderson, and told her that she was now safe, and that he had retrieved her purse. However Mrs.Anderson took it into her head that since he was masked, he had only chased the criminals off so he could steal her purse himself. She stridently proclaimed as much, hit the hero over the head with her handbag and shouted loudly for the police. Deciding discretion was the better part of valour, Captain Britain fled.

On the cover of the issue in question, Captain Britain is seen leaping at two of the muggers, one of whom has a club, the other a gun, with the gunman defiantly stating that the hero "ain't bulletproof". In the story within however none of the thugs appears to be armed, and they flee without a fight the second they spot the hero approaching. One of them rationalises their cowardice with comments that "a few shillings won't buy much in the hospital", which is very true - at the time this story was published shillings had not been legal currency in Britain for six years! Besides, the thug wouldn't have needed any money in hospital anyway, since most British hospitals don't charge patients for health care.

CLARIFICATIONS: Not to be confused with