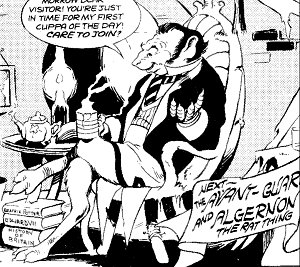 Identity/Class: Extra-dimensional (Earth 238) rodent mutate, British-born (though not a citizen)

Occupation: A true gentleman does not need an occupation

Base of Operations: A storm sewer tunnel on the edge of Saturnyne's base,
Earth 238

Powers/Abilities: Is a perfect gentleman - for example he knows to pour tea with his little finger upraised and has "taste in dress and interior design". Which isn't much of a power admittedly,  but is pretty good going for a rat. 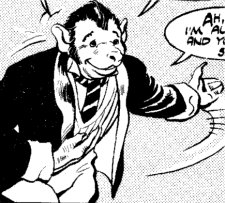 History: (Marvel Superheroes#380 (fb) - BTS) - Saturnyne and her Avant Guard set up a secret base beneath the sewers of Earth-238's London, and began preparing an evolutionary enhancing fluid. Though this was intended for the world's human population, an ongoing leak developed. A sewer rat exposed to the fluid became humanoid, named himself Algernon, and adopted the mannerisms of a stereotypical English gentleman, though he tended to drink more of the enhancing fluid rather than tea. Though Saturnyne soon became aware of his presence after he set up home close to her base, for six months she chose to leave him be, considering him a harmless irrelevance.

(Marvel Superheroes#379) - Captain Britain followed the trail of fluid that seemed to have been the cause of the evolution of the Junkheap that Walked Like a Man, and found Algernon enjoying a cuppa at the other end. Having proper manners, the rat offered the intruding hero a cuppa too.

(Marvel Superheroes#380) - Algernon introduced himself and Captain Britain engaged his host in polite conversation. The hero identified the brew he was offered as the same liquid that appeared to mutate the Junk monster, and learned that Algernon remembered the last six months or so, but was unsure of his own origins prior to that. Their conversation was being monitored by Dimples, assistant to Saturnyne. Rather than risk Algernon telling the Captain something that might threaten the Push, Dimples sent the Avant Guard in. 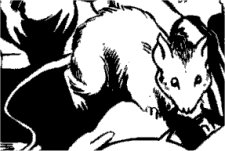 Meanwhile, back in the tunnel the inebriated elf Jackdaw teleported in. He mistook the bewildered Algernon for Seamus, an old crony from his campaign days. Just as the two heroes were about to depart, the Avant Guard arrived and a fight ensued. The Guard used their umbrella weapons to send Britain and Jackdaw into another dimension, but they swiftly returned, courtesy of Jackdaw's own dimension-hopping abilities. Changing tactics, the Guard resorted to their devolvo-ray. Captain Britain dodged the initial blast, but Algernon was struck instead, and reverted to being a normal rat.

Captain Britain was also regressed by the devolvo-ray, and turned into a chimp. The leaking evolutionary fluid swiftly undid this damage, so it's not too much to hope that it did the same for Algernon as well. And, since he was staying right next door to Saturnyne and her dimension hopping equipment, maybe he escaped his home dimension before it was destroyed by Mandragon. Okay, so I'm stretching, but I liked Algernon and feel he deserves another chance.

Though they don't count as actual appearances, Algernon made two further cameos during this overall storyline:

(Marvel Superheroes#388) - Algernon was one of the nightmare visions that Mad Jim Jaspers taunted Captain Britain with at his mad tea party.

(Daredevils#1) - When Merlyn was rebuilding the deceased Captain Britain's memories, Algernon was visible among his recollections of the Crooked World he had just escaped from.

Algernon's name may serve as a reference to the novel Flowers for Algernon by Daniel Keyes, in which a rodent undergoes an experiment and receives heightened intelligence. Note that Keyes worked for Timely/Atlas.
--Per Degaton

CLARIFICATIONS: No known connections to:

All characters mentioned or pictured are ™ and © 1941-2099 Marvel Characters, Inc. All Rights Reserved. If you like this stuff, you should check out the real thing!
Please visit The Marvel Official Site at: http://www.marvel.com